A Gamecock Narrative: Jenkins Anyone?

Thanks to the Anti-Orange page and ToonDawg for posting this a couple of years ago.

THIS IS SOUTH CAROLINA FOOTBALL 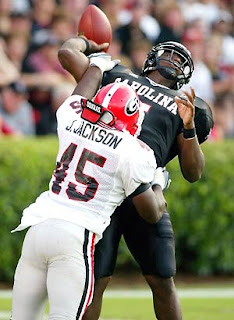 Given one century to attain the sheer, magnificent power of breaking even, South Carolina proudly maintains a tradition handed down from one generation to the next. Plumbing new depths in futility the University of South Carolina Athletic Department forges into a new century, one that promises to be as desperately hopeless as the last.

Entering the 2008 season, South Carolina can point to an all-time winning percentage under .500 (521-523-44), which ranks 88th all-time in D-1A football. Only 29 programs have bested this profile in sub-mediocrity. Walk with us along this corridor of pigskin failure: Duke, Western Michigan, Toledo, Navy, UAB, Central Florida, Ball St., North Texas, Nevada, East Carolina, Houston, Northern Illinois, Utah St., San Jose St., Vanderbilt, Akron, Baylor, UNLV, Kansas, and Rutgers. None of these names, however, say the word LOSE like the University of South Carolina football.

This, then, is Carolina Gamecock football. Carolina, whose stadium perches in Columbia, the New Jersey of the South, and resembles a dead and decaying cockroach. Carolina, where the players run onto the field under a sign that says, “Abandon Hope, All Ye Who enter Here.” Who run onto the field under a cloud of smoke for protection from insanely angry fans; who listen to the piped-in strains of “Also Sprach Zararthustra,” which is in fact a German anthem about the Persian founder of Zoroastrianism. Then they hear their fight song, a flopped Broadway Show Tune imploring the listening fans to “Step to the Rear.” This is Carolina Gamecock football.

Like a band of wandering gypsies, Carolina has never been welcome in any athletic conference. In the 59 seasons Carolina has been affiliated with anyone who would take them, however, they have won one championship. Yes, the ACC in 1969, achieved with a 7-4 record. Since the Associated Press began ranking football teams in 1936, the Cocks have finished in the Top 20 of the rankings only five times in the 71 years. Carolina has never finished in the Top Ten of a major recognized poll. Let us contemplate that word again: NEVER.

Carolina took its first inept shot at the new game of “Foot Ball” in 1892. Only one hundred and three years later, the program achieved its first bowl game victory. In 115 seasons of spectacularly, mind-numbingly unimpressive football, Carolina has yet to participate in even one Major Bowl (now known as BCS bowls: Rose, Sugar, Orange, Fiesta, or Cotton).

Of the 56 programs which have played more than 1000 games all-time, only four have scored fewer points than South Carolina in their school’s history. And since Carolina joined the SEC in 1992, only two teams have fought off the Gamecocks for the glories of last place in victories: Kentucky and Vanderbilt. Although Carolina has finished last in its division twice. Carolina has yet to win six conference games in a season, joined again only by Kentucky and Vanderbilt in that particular achievement of hopelessness. Let us also remember that it was the distinguished accomplishment of Gamecock football to navigate two consecutive seasons without winning a single conference game; racking up an impressive string of 21 consecutive losses, having their run of inglorious failure snapped only in 2000 by beating eventual 3-8 record New Mexico State—after which, of course, the understandably brain-damaged chicken fans stormed the field and tore down the goalposts, a wonder New Mexico State never figured to experience after a game in an SEC stadium. This is Carolina Gamecock football.

I try to bring the most to this blog through copy and paste.