Hate Week.  A time when members of the Bulldog Nation show what it means to be part of the Georgia faithful.  We make the annual trek to Jacksonville to support the team in silver britches with a black G on the side of that beautiful red helmet.  We get into a war of words with our enemies from the south, making funny of their denim attire and their love of haircuts that have not been popular since the 1980's.  Hate week has always been about celebrating everything we love about Georgia and everything we despise about Florida...until today.  Hate Week 2012 will be marked as the day that I officially began hating the student operated newspaper, The Red & Black.

Anyone who attended school in Athens most likely has some kind of memory attached to the Red & Black.  Be it the Get Fuzzy cartoons, the stupid editorials about finding the best drink specials downtown, to the ever reliable crossword puzzle, the R&B was there to provide some distraction during those 75 minute lectures about macroeconomics or the climate patterns in southeast Asia.  So it came as a surprise this afternoon when I heard about a full page advertisement that appeared in today's issue of the paper. 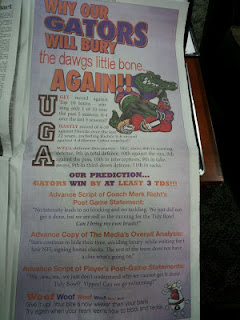 The nature of the ad was to attack Georgia's football team and make a mockery of our coach.  I was not shocked that Florida fans would pay to have something like this put in our paper.  However, I am completely shocked that the editors and people who run The Red and Black would allow this to happen at all.  Under no circumstances is this acceptable for the student newspaper, independent of but still representing the University of Georgia, to run an ad like this.  It is degrading and down right insulting.

Like myself, many other people were outraged and voiced their opinions to the Red & Black's twitter account (@redandblack).  I expected a logical response and perhaps an apology, but instead there was the biggest scape goat answer I have ever seen (this same response was given to multiple people):

It's a paid advertisement. We have to sell some ads to bring students free news. Put some duct tape over it, we understand.

Are you freaking kidding me?!?  You are hiding behind money and the fact that you are a free paper?  If I was in charge of that paper, there is not amount of money that could have been paid to me to allow that ad to run in my paper.  It defeats the whole purpose of the paper, to report and cover the University of Georgia.  Hell, their official purpose is (from www.redandblack.com):

"Our two-fold mission is: to provide a training ground for students interested in gaining experience in various aspects of newspaper publishing and to produce a high quality newspaper for the University of Georgia community."

I don't know about you, but running crap ads that demean the university seem to break both of those missions.  An ad such as this is not something you see in a high quality newspaper.  You would never see an ad as childish as this in the AJC or any other paper.  And how does running that ad help the students in their learning experience?  It makes the paper that they are writing for and the school which they attend and hope to earn a degree look bad.

Later this evening, they offered an official statement from the Red & Black editorial board.  The long and the short of it was that they don't control the advertisements (I can't seem to find the link right now).  That's crap.  There is always someone who has the final say of what runs in a newspaper.  And it seems to me that the editorial staff, both student and non student, have enough power to stop the presses.  Hell, the entire staff WALKED OUT THIS SUMMER and the man who was running the paper quit!  So don't tell us you have no control over the ads that run in the paper.

So, as of today, now October 26, 2012, I officially hate the student newspaper at the University of Georgia, The Red & Black.  It no longer provides a positive image of the university and is not trying to make the university a better place for the students and men and women who work there.  This paper has operated without competition for a long time and I think the power has gone to their heads.   I wish the student editorial staff would have stuck to their guns when they walked out this summer, because maybe there would be a second choice for students to get information.  I am not a journalism major and if you this read blog, clearly I have no professional training, so by no means am I claiming that I could do a better job.  But there has to be someone out there who could.

I hate Florida and now I hate the Red & Black (newspaper)!

PS - I have also read some chatter that some people feel this ad may have been planted by Georgia fans to try and motivate the team.  If that is the case, ARE YOU FREAKING KIDDING ME?!?  What kind of motivation is that?  It smells a lot like FAKE JUICE to me.  If indeed it was a Georgia fan behind this, turn in your Dawg card now, sell your season tickets, as stay as far away from Athens as possible.  We don't want, or need, people like you.
Posted by Streit at 12:21 AM 5 comments:

The year was 2002.  In its second season under Mark Richt, the Georgia Bulldogs were undefeated heading into the showdown with Florida in Jacksonville.  The Dawgs had a strong defense led by Sean Jones and Boss Bailey and a rising star named David Pollack.  The offense was playing well too, with a finally healthy Musa Smith and sophomore quarterback David Greene coming into his own.  Georgia was ready to not only win the SEC but compete for a National Championship.

Jump to today.  Florida is in its second season under Will Muschamp and are undefeated.  They have a strong defense led by veterans Omar Hunter and Matt Elam.  This offense is playing well, with senior running back Mike Gillislee carrying the load and Jeff Driskel quickly improving.  They are ranked near the top of the BCS standings and looking to reassert themselves on the national stage.  Sound familiar?

In 2002, the Gators decided to ruin the party for the Dawgs.  Make no mistake, the Gators were not playing their best football entering the contest.  As a matter of fact, they were still ranked, but at 5-3 they had already suffered a loss to an Ole Miss team that would finish the year at 6-6.  They had also been embarrassed by LSU two weeks earlier, losing 36-7 in Baton Rouge (doesn't this also sound familiar to Georgia losing 35-7 at South Carolina).  Despite this, the Gators walked into the stadium in Jacksonville and ruined Georgia's perfect season.

I think it is time to repay the favor.

Is Georgia playing good?  Hell no.  The loss at South Carolina was embarrassing and the defense looked pathetic in the close win at Kentucky.  But does that mean that there is not talent on the team? No.

Make no mistake Georgia fans, it may look bleak.  But if you can't look at the big picture and see that a win could mean that all those goals from the beginning of the season will be back on the table, then you are just blinded with hate for the coaching staff.  A win Saturday means we will most likely return to Atlanta.  Would we be able to hang with Alabama, I have no clue.  But you can't find out if you don't even make it in the first place.  It's time rally around the team and get a little revenge for 2002.

And by the way, as Georgia we hate Florida.  That should be motivation enough.