Analysis
Based on Coach Richt's comments and the performance of Ealey and King in 2010, right now I have to believe Isaiah Crowell will be the starting running back come September. The coaching staff has made it clear that they will not have another case of "Knowshirting" and Crowell will definitely get his touches with the first team in summer practice. Even if Crowell earns the #1 spot, I expect Ealey, King, and Malcome to be part of the offensive gameplan. G-Day may help determine the pecking order for these guys. I am sure that the days of Carlton Thomas running the ball up the middle should be over.

Analysis
The decision to move Figgins fulltime could potentially pay huge dividends come this fall. During his time as OC, Bobo has used the fullback in the passing game a lot. Figgins will be perfect in the role. Zander Ogletree proved to be worth his scholarship last fall and will see plenty of playing time as well. Beyond Ogletree and Figgins, walkons make up the remainder of the fullback depth chart.
Posted by Streit at 12:54 PM 1 comment:

*This is the first in a multi-part series examining the Georgia depth chart following National Signing Day.

Assessment
Aaron Murray had an amazing freshman season in 2010 that will go down as one of the best overall seasons for a quarterback in Georgia history. Unfortunately, a bad performance in the Liberty Bowl prevented him from setting a number of Georgia single season records. He sits comfortably atop the quarterback depth chart and will most likely be there for the next 2-3 seasons.

Hutson Mason played sparringly last fall, however he did throw for a touchdown on hist first career pass. He will head into the spring and summer at #2 on depth chart, but will battle with Christian LeMay to keep that spot. The highlights of Lemay in high school show he has all the skills of a true dual-threat quarterback. While he could take the backup job from Mason, my hope is that the coach staffing will redshirt him, leaving him with atleast two years to be a starter in Athens. Of course, all that could change if (heaven forbid) Murray got hurt.
Posted by Streit at 10:38 AM 2 comments:

2011 Recruiting Wrap Up: The Dream Team is really the Complete Team

I know Coach Richt is still waiting on the final decision of big John Jenkins before officially wrapping up recruiting for this year, but at the point the 2011 recruiting season is over. Signing all 23 of the verbal commits the Dawgs had coming into yesterday and picking up Isaiah Crowell and Kent Turene was the icing on the cake for Coach Richt, Coach Bobo, and Coach Grantham. And while this class will be remembered by the Dream Team moniker, maybe the more appropriate name is the Complete Team.

In year's past, Georgia has tended to focus on certain positions to drive their recruiting efforts. Often a class rich in skill position players may have been thin on the lines or a class rich in offensive lineman was weak in the secondary. This class is a completely different story. The Dawgs were able to wrap solid commits at nearly every single position on the field. As a matter of fact, you could make almost an entire 22 man starting roster from this class. The only positions that we did not sign players at were fullback, kicker, punter, and center (though a couple of the offensive line recruits could play center). We even signed a freaking long snapper!

And it is not just the fact that we found bodies at nearly every position, but a number of players that may have immediate impacts. Crowell will be given a chance to start at tailback, Drew will compete for the vacated spot left by Justin Houston, Malcolm Mitchell will see action at receiver, Jay Rome may see the field with Figgins moved to fullback, and John Jenkins (if he signs) will most likely be the starting nose guard. Overall, this is an amazing class that filled our needs and stocked the cupboard with talent.

Tomorrow, I will take a closer look at the Georgia depth chart prior to spring practice with the new recruits in the mix.
Posted by Streit at 12:29 PM 1 comment:

UPDATE - Crowell is a Dawg...and he has one too. 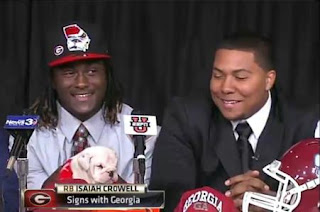 It is about to be 1:00 PM, only 30 minutes until the decision from Isaiah Crowell. As we stand right now, Georgia has signed all 23 of the players they had committed coming into today. We did miss out on Pagan and Richardson, but picked up linebacker Kent Turene.

I hope Crowell makes the decision to come to Athens, but if he doesn't we should not freak out. this is still one heck of a recruiting class and an excellent job by Coach Richt and staff. I still think Jenkins ultimately comes to Athens, and that would be the final touch on a great recruiting off season.

Coach Richt also said he expects to have a new o-line coach in place by next week.
Posted by Streit at 12:56 PM No comments:

In just two hours, it will officially be National Signing Day. By this time tomorrow, we will know whether the Dream Team is a completely reality or just really close. On Thursday, I will have a complete wrap from signing day, including who got, we we missed on, and how those players might fit into next year's depth chart.

Happy Signing Day to All!!!
Posted by Streit at 9:56 PM No comments:

Mark Richt took over as Georgia’s head coach following the 2000 season and has enjoyed a lot of success on the recruiting trail. While Richt was able to secure stars like DJ Shockley as part of the 2001 recruiting class, the class of 2002 was his first full class in Athens. Here’s my opinion of some of the best and worst of recruiting in the Richt era:

Top 5 Players who “Lived Up to the Hype”
1. AJ Green – Any questions?
2. Matthew Stafford – The kid from Texas was expected to lead Georgia to a National Championship. We got pretty close during his sophomore season.
3. Max Jean-Gilles – I remember all the hype about how big this kid was and how we stole him away from Miami. He definitely fit the bill, becoming a multi-year starter and an All-American.
4. Kade Weston – The five star recruit from New Jersey, turned in a great Georgia career.
5. Paul Oliver – Another top 5 player at his position, Oliver really developed during his career. Too bad academics got in the way.

Top 5 “Busts”
1. Akeem Hebron – Originally part of the 2006 class, Hebron went to Hargrave and then came back to Georgia. But the 5 star recruit never materialized into much on the playing field and he finished his time at Georgia this fall having never really made an impact.
2. Brandon Miller – The number on DE in the country in 2004, Miller eventually found a home at linebacker. And while he became a starter and was good on special teams, his career never met the expectations that most fans had.
3. Darius Dewberry – Like Hebron, he also failed to qualify initially but still found his way back to Athens. His impact was minimal at best, but much better than Hebron’s.
4. Kregg Lumpkin – You could probably put the careers of Lumpkin and Caleb King in the same boat. Both were 5 star recruits considered as one of the top 5 running backs in the country. But injuries and a crowded depth chart hampered their development.
5. Marquis “Mud Cat” Elmore – While other players on this list were 5 star recruits, Elmore was not. But his name was so distinctive that he developed almost a cult status before he ever saw the field. He made little to no impact in four years, and failed to have a good career to match his nickname.

Top 5 “Overachievers”
1. Fernando Velasco – “Bubba” was a two star O-lineman but turned into one of the key players on the Dawgs offensive line in 2007.
2. Knowshon Moreno – Yes, he was highly recruited and was considered one of the best running backs in the country out of high school. But the fact that he was redshirted in 2006 means the coaching staff was not really sure what they had. Clearly, if you rated him again he would have been a 5 star recruit.
3. Danny Ware – Ware was originally recruited as a two star linebacker. The fact that he ended up as a successful running back is pretty impressive.
4. Christian Robinson – Robinson will only be a junior this fall, but his development has been fun to watch. I only expect him to get better over the next two years.
5. Brannan Southerland - Fullbacks are rarely rated above 3 stars, but maybe they should be. Southerland was a vital part of the Georgia offense during his four years.

Top 3 "What were the Experts Thinking"
1. Israel Troupe - He was Georgia's highest rated player according to ESPN in 2007. Really???
2. Joe Tereshinski/Logan Gray - Both were rated 4 star quarterbacks, but they are no where near the level of Aaron Murray.
3. Bryan Evans - Don't get me started. 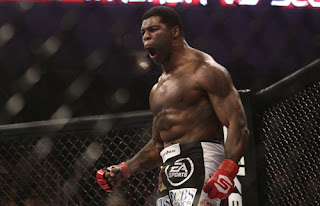 (Photo Courtesy of the Atlanta Journal-Constitution)
Herschel Walker made quick work of Scott Carson on Saturday night to improve his MMA record to 2-0. Hopefully, Herschel has set the tone for the entire Bulldawg Nation for the remainder of this week. Here's what is coming up:

- It is make or break week for Georgia basketball. After two straight tough losses to Florida and Kentucky, the Dawgs face two SEC west opponents this week. Arkansas is coming off a win at Vanderbilt, so the Dawgs better be more ready than they were on Saturday. Auburn comes to town this weekend and if the Dawgs lose that one, there is not shot of making the NCAA tournament.

- But the real focus of this week is recruiting. National Signing Day is Wednesday, but the recruiting season won't officially end until Saturday when John Jenkins makes his decision. At this point, I am pretty confident that Georgia's gets Crowell and Pagan on Wednesday. Richardson and Turene would be nice as well. But getting Jenkins to fill the hole in the middle of the D-line remains the most important player left on Georgia's big board.
Posted by Streit at 10:22 AM 1 comment: