The Dawgs return to Athens for their first home game since beating Mississippi State back on October 1. And after the hard fought victory over the Gators in Jacksonville last week, getting a cupcake game could not come at a better time. I am not going to take much time talk about tomorrow's opponent, the New Mexico State Aggies. I did a profile of them earlier this year that you can check out here. They are a bad team from a bad conference who the Dawgs should beat handily. They do have a decent passing offense and are one of the better teams in the country at kickoff returns (which does scare me a little bit). But other than that, there is not much to talk about.

As for Georgia, the feel good vibes from the Florida victory were quickly dashed this week with the suspension of Isaiah Crowell, Carlton Thomas, and Ken Malcome. The controversy surrounding these suspensions is BS and it seems like everyone is trying to take shots at Mark Richt. But the truth of the matter is the tests took place on Thursday, they got the results on Monday, and the players were automatically suspended per AA policy on Tuesday. I really have to laugh at the Florida and Auburn fans who are complaining, since if this had happened at their schools these guys would be playing this week. In the end, it is just an extra week of rest for these backs who we will need down the stretch with Richard Samuel out with ankle surgery (yes, even Ken Malcome).

This Saturday should be a good chance for the Dawgs to rest some guys and get some backups into the game. Despite his insane 4 sack effort last week, Jarvis Jones has an MCL sprain and I would love to see him get some rest. Maybe we get to see more Ray drew? I'd also like to see Mark Richt give Mason some snaps, just in case Auburn decides to carry on the traditions of Nick Fairley and take cheap shots next week.

Despite the suspensions, I feel like the team is in a really good place right now. A win tomorrow (which would be 7 in a row) coupled with an Arkansas victory over South Carolina could mean next week's game with Auburn will pretty much decide the SEC East (there's no way we lose to Kentucky with the East on the line). From a team that started 0-2 and was getting killed in the media to a potential SEC Championship birth, I am proud of this year's squad.

So, what will the play book look like on Saturday?

Since we have exactly zero scholarship running backs healthy or eligible for Saturday, I predict a heavy dose of passing. I'm thinking the play book will look something like this: 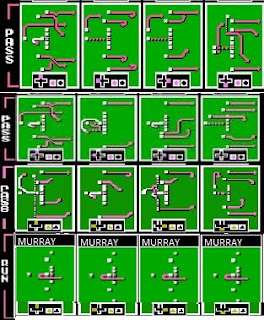 My first trip to Jacksonville since the victory in 2004 proved to be victorious this time around. I guess that means I am going to have to make the trip every year. I don't care how ugly the victory was, it was still a victory. And in this series, that is all that matters.

I will only spend a little breath on the bads, because we all know them. Special teams...WTF. Blair needs to see a shrink or something. The kick coverage was horrible too, even though I noticed a few more starters like Ogletree and Samuel out there. Murray made some great passes, but missed a couple of easy wide open throws. No where near as bad as last year, but still. Everything else wasn't perfect, but we won, so they are forgiveable. Now, onto the bright spots.

This was just a great weekend. A gritty, gutsy effort for the Dawgs. This is the type of game that Georgia loses in this series, but we somehow found a way to win. The celebration was great and my favorite quote came from Georgia receiver Michael Bennett:

"I've never seen so many drunk people in my life. I jumped in crowd and all I could smell was whiskey."

And in victory, what a glorious smell that is!