Who is Joe Cox?

With Wednesday’s announcement that Matt Stafford is leaving Athens early for the NFL Draft, the position of quarterback for the Georgia Bulldogs falls onto the shoulders of soon to be 5th year senior Joe Cox. But, just who is Joe Cox and what can we expect from him in 2009? 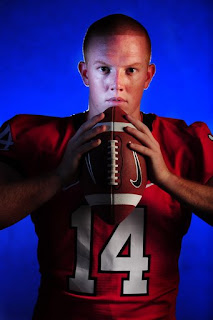 Joe Cox committed to the Georgia Bulldogs out of Independence High School in North Carolina as part of the 2005 recruiting class. A powerhouse program in that state, Independence had previously produced Florida Quarterback Chris Leak and they never lost a game during Cox’s years at QB. His stats during those final two years speak for themselves:

After his senior year, Cox was awarded the Associated Press’s North Carolina Player of the Year Award. His 66 touchdowns passes were a state record and helped earn Cox a 4 star rating from various recruiting services. Cox had offers from a number of schools, including in-state ACC schools North Carolina State and Duke. In the end, the class of 2005’s 22nd ranked quarterback committed to the University of Georgia along with his high school teammate, wide receiver Mohammed Massaquoi. 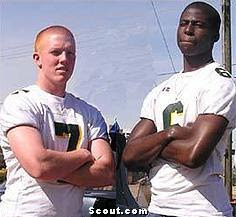 Joe Cox arrived at The University in 2005 and was redshirted during his first fall. He gained experience on the UGA practice squad and was awarded the Outstanding Offensive Scout Team Player Award by the coaching staff. In 2006, Cox was in the middle of the three-way battle for the starting spot with Joe Terishinski and Matt Stafford. Cox saw limited playing time against Western Kentucky and UAB, but then came the Colorado game. With Tereshinski out from a leg injury and Stafford struggling, the Dawgs found themselves down 13-0 in the fourth quarter to a lowly Colorado squad.

Cox would enter the Colorado game and have the defining moment of his career at Georgia, thus far. Cox would lead the Bulldogs to two touchdown drives, including throwing the game winning touchdown pass to Martrez Milner:
Cox finished the game 10 out 13 for 154 yards and two touchdowns. He earned Sporting News College Football Player of the Week, SEC Freshman of the Week honors, and the right to start Georgia’s next game against Ole Miss. Cox would struggle against the Rebels, and eventually Matt Stafford took over as Georgia’s quarterback for the next few years.

Cox saw limited action during the 2007 and 2008 seasons. In the 2008 Georgia Southern game, he completed 4 of 6 passes for 48 yards and threw the first touchdown pass reception of AJ Green’s career. Cox also came into the game late in the second half of the loss to Florida and led Georgia’s most successful drive of the day. He threw Georgia’s only touchdown of the game, a beautiful touch pass to tight end Aron White. Through his junior year, Cox’s career stats include 33 completions on 58 attempts (57%) for 432 yards, 5 touchdowns, and only 1 interception (an overall quarterback rating of 145).

Now the job of starting quarterback has once again found its way into Joe’s hands. As a fifth year senior, I expect Cox to have solid year with a limited number of mistakes. With flanker AJ Green on one side and receivers like Michael Moore, Kris Durham, and Tavares King on the other, Cox should put up good stats in Mike Bobo’s system. Don’t expect Cox to make all of the amazing throws that Stafford made, as his arm is not as strong. However, what Cox lacks in arm strength he makes up for in accuracy and touch. With an improved offensive line and solid contributions from the running game, there is no reason Joe Cox cannot have a solid SEC season in 2009. 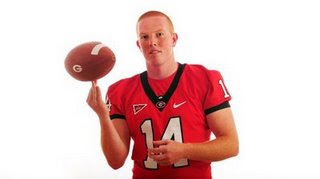 NOTE: The National Championship is worth 8 points.

Ally, Ann&Bob, AUMaverick, Jason and Joe picked Ball St, so everyone else got a point for Tulsa.

I'll post the final rankings and some bowl pool award later on, but as for the game, BFR, Jason, Joe, SRQDawg15, and Streit were the only ones to pick the Sooners, so they lost!


Here were the rankings going into last night's CHOKElahoma extravaganza.

I'll be wearing Crimson and White 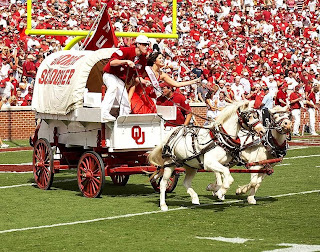 For the second straight game, Florida plays a team whose primary colors are a white and a shade of crimson. No matter how much pride I have for the SEC, I cannot bring myself to root for the Gators. I hope Sam Bradford and the Sooner offense score enough points to make poor little Timmy cry.
I hate Florida.
Go Sooners!!!
Posted by Streit at 11:44 AM 2 comments: 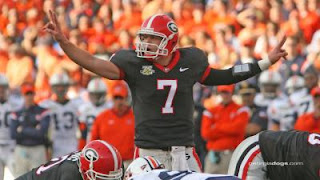 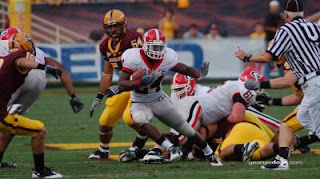 Even though we all saw this coming, the Bulldawg Nation held its collective breath in the moments leading up to this afternoon's press conference, clinging to the last glimmer of hope that our co-offensive MVPs would return for another year of Bulldog football. Though we won't get our wish, we wish the best for these two guys. We'll be watching you on Sundays, boys.

The majority picked the Longhorns in an 11/2 split, with only Ann&Bob and Joe picking Ohio St.

Everyone else picked Tulsa.

Give Me That Old Time Religion

As I write this, I'm listening to ESPN's "Around the Horn" in the background arguing about just who deserves to be the "national champion." Wasn't the wonderful BCS supposed to settle this for us when it was created 10 years ago. Instead the conference commissioners and college presidents gave us some half-assed excuse between the old bowl system and a playoff, and we ended up with the worst possible system of all.

So is the winner of the Oklahoma-Florida game, Texas, USC or Utah the "national champion?" They told us 10 years ago that it was the winner of the Oklahoma-Florida game. Why? What separates Oklahoma and Florida from the rest? Oh, that's right, they occupy the #1 and #2 slots. And that's all. That's it. That's the only difference. That, and the fact that Oklahoma lost to Texas, that Utah is undefeated with a win over a quality SEC opponent in the Sugar Bowl, and that USC just might have the "best" loss out of all the 1-loss teams considering it was on the road.

So, if we're not going to get an 8-team playoff anytime soon, why not just go back to the old bowl system? Remember when more than one bowl game mattered on New Year's Day, back before we started to pretend that only one game matters now. The Rose, Sugar, Orange, Cotton and Fiesta.

So why not the Big XII Champion Oklahoma tied into the Fiesta and the SEC Champion Florida tied into the Sugar? Make those top 2 teams play the toughest team possible. In other words, send the #3 Texas Longhorns to play the Gators. Send the #4 Alabama Crimson Tide (I know, I know...the Tide lost to Utah) to play the Sooners. If the Sooners win, they win it all. If they don't, then the Gators-Longhorns winner takes it. Give me that Old Time Religion when New Year's Day meant something. 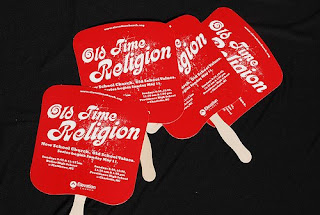 A Bit of Good News

Rodney Garner is staying, per The AJC.

Damon Evans and Mark Richt found a way to keep our two best assistants (Garner and Searels) in Athens. Now if we could just find a way to fix the defense.
Posted by Streit at 3:19 PM No comments:

The majority won on Saturday with the UCONN victory.

Bubba, Stephen, Jason, and Joe were the only ones to pick Buffalo.

The majority picked the Longhorns in an 11/2 split.

Ann & Bob and Joe were the only ones to pick Ohio State.

The team had a fun time celebrating after the victory over Michigan State.