Matt Stafford and Sam Bradford share a lot of things in common:
- Stafford was the top quarterback in his draft class and was drafted # 1 overall. Sam Bradford is the top rated quarterback in this year's class and has a good chance of being drafted # 1 overall by the Rams.
- Both Stafford and Bradford suffered shoulder injuries during the 2009 season and ended the season on the injured list.
- Both are considered ideal NFL quarterback size and have strong right arms.
Another similarity between these two was discovered today with the release of the Wonderlic test scores from the 2010 scouting combine. Last year, Stafford scored an impressive 38 on the test that is supposed to test learning aptitude. Bradford finds himself atop the 2010 QB class with a score of 36, far outdistancing fellow potential NFLers Colt McCoy (25) and Jimmy Clausen (23). And what of the Golden Boy of this year's draft, Tim Tebow? Timmy finished at the bottom with a score of 22. That's very similar to another athletic left handed quarterback who struggled to make the change from a running QB in college to a passer in the NFL: 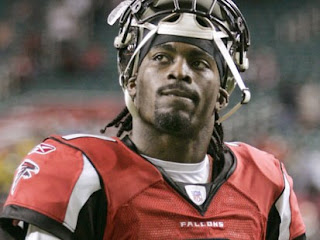 Vick scored a 20 on his Wonderlic.

At least the team won't have to worry about Tebow running an illegal dog fighting ring.

Spring practice has begun and while the current Georgia Bulldogs are using these next few weeks as their first official work for the 2010 season, a number of now former Bulldogs are using this time as their last chance to work out on the Georgia practice field. In a few weeks, Georgia will host its annual Pro Day, a chance for those players who are eligible for this year's NFL draft to showcase their talents in a familiar environment. Last year, Georgia's Pro Day was a show case on the offensive side of the football. Future first rounders Matthew Stafford and Knowshon Moreno along with Mohammed Massaquoi (2nd round) were the stars on display. Dannell Ellerbe, Corvey Irvin, Jarrius Wynn, and Asher Allen would also go onto pro careers, but the defense was definitely outshone by the offense.

The 2010 Pro Day will be a much different story for the Georgia Bulldogs. There will no first rounders in this class and the majority of those looking to further their careers will be on the defensive side of the ball. Michael Moore and Vince Vance has nice careers at Georgia, but I do not expect to hear their names called on draft day. Here is a quick look at the players who are looking to make a name for themselves at Georgia's Pro Day:

- Rennie Curran, LB - The undersized linebacker was a tackling machine at Georgia. There has been concern about his size, but the numbers speak for themselves.
- Reshad Jones, S - Jones has all the tools to be a great NFL player. He improved his tackling in 2009 and should make for a nice mid to late round pick up.
- Jeff Owens, DT - One of Georgia's three outstanding defensive tackles, Owens returned from an ACL injury to put together a decent senior year.
- Geno Atkins, DT - Undersized for DT, Atkins can play some at defensive end as well. An impressive workout could push him into the second round of the draft.

Good luck to all of these former Bulldogs at the next level. We look forward to you continuing the proud Bulldog tradition on Sundays.