Usually, G Day has proven to be rather boring. So, while there were over 40,000 people at Sanford yesterday, I was the only member of my group of friends to go. But, I got to see a competitive game and I am very glad I made the decision to drive to Athens. Here are my thoughts on the game:

- Beast of the game - Garrison Smith. He was destroying the o-line, especially in the first half. It seems like his play late in the season last year was just a sign of good things to come. 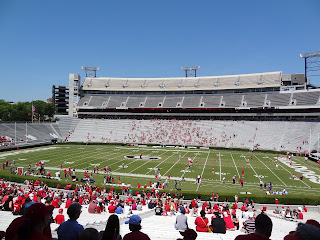 - Our new defensive ends - Both Cornelius Washington and Ray Drew have made the move to D end and both looked good. Drew definitely looks better with his hand in the dirt. He recorded two sacks and showed some impressive speed chasing down Brandon Harton.

- Tavarres King showed off some major speed, taking a swing pass from Murray to the house after a nice block from Marlon Brown. I think T King is up to the challenge of being the deep threat while Mitchell plays corner the first few games of the season. 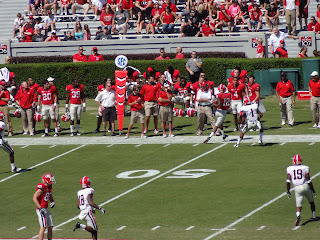 - Hutson Mason and Christian LeMay both had nice games. LeMay has come a long way from last spring and is really good at the play action fakes. But he needs to work on his down field accuracy an decision making. While those guys may have head better numbers, Aaron Murray is clearly still the best QB we have. He was under constant pressure from the #1 defense and still made some nice plays. 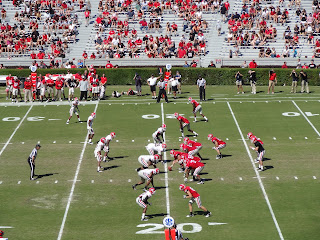 - Jarvis Jones is awesome. He only had one tackle, but was in the backfield consistently and looked as quick as ever. 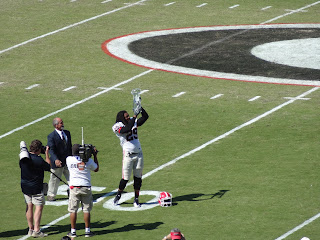 - It was a good day for the running backs. I was really pleased with Crowell, who despite not having special numbers looked healthy, was quick to the edge, and was lowering his head and finishing runs. If the line comes together, I fully expect he will have a great sophomore year. Ken Malcome has also come along nicely and scored two touchdowns. Richard Samuel looked great in the second half as well. Even Brandon Harton may have found a spot, catching 6 passes out of the backfield. Running him up the middle may not be smart, but getting the little guy alone in space may be a nice wrinkle in the Georgia offense. 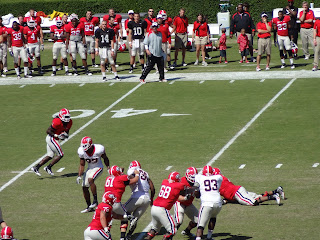 - Thank God we have a scholarship punter coming this fall. The walk-ons they had out there were terrible. With no rush, you should always be able to kick it at least 35 or 40 yards!

Overall, a fun spring day in Athens. Now we head to the dead period until summer practice. I have been busy lately, but hopefully I will get back into a regular writing schedule soon.