With new defensive coordinator Todd Grantham bringing the 3-4 defense to Athens, it is hard to know exactly what Georgia's defense will look like this fall. The early exits of Reshad Jones and Rennie Curran paired with the graduations of Bryan Evans, Prince Miller, Jeff Owens, and Geno Atkins means there are at least 6 starting jobs open. Here is my best guess at the current Georgia depth chart, before signing day and spring practice.

DE - Justin Houston, Demarcus Dobbs
- I expect both players to be starters under Grantham's system, however we may see Justin Houston move to a linebacker hybrid position.

DT - Deangelo Tyson
- The graduations of Kade Weston, Atkins, and Owens leaves Tyson as the only experienced tackle the Dawgs have left.

ILB - Akeem Dent, Daryl Gamble
- Dent should have one of these spots, but Gamble may move outside.

OLB - Marcus Dowtin, ???
- Dowtin will occupy one spot but the other spot is anyone's guess. Christian Robinson played well at the end of last season.

CB - Brandon Boykin, Branden Smith
- Both players should improve in 2010. Look for Smith to really develop into a shut down corner.

S - Bacarri Rambo, Jakar Hamilton
- I am so excited to see what Rambo can do as a starter. The defense was clearly better when he was on the field last season. At the other spot, I will give the early edge to the Juco transfer Hamilton, though a healthy Quentin Banks and freshman Alec Ogltree will also push for playing time.
Posted by Streit at 11:51 AM 1 comment:


QB - Open
- This job is open right now, but I expect Aaron Murray to take hold of the position.

FB - Shaun Chapas
- Chapas and fellow senior Fred Munzenmaier should be a major force in the Georgia running game.

WR - AJ Green and Tavarres King
- Georgia is loaded at receiver. Behind Green and King, the Dawgs will have Marlon Brown, Rontavious Wooten, and Israel Troupe. And don't forget that Kris Durham will also be back from injury.

TE - Aron White
- Georgia may have the strongest TE crew in the country. In addition to White, Orson Charles is a major threat in the passing game. And with the return of Bruce Figgins, Georgia gets its best blocking tight end back.

LT - Clint Boling
- Boling is the most versatile player on the Georgia line, but really found his home at left tackle last year. If Trinton Sturdivant can come back again, he will be able to provide some relief for Boling.

LG - Cord Glenn
- Entering his third year as a starter, Glenn will only continue to improve.

C - Ben Jones
- An absolute beast in the middle, he may be on the pre-season All-SEC team.

RG - Chris Davis
- Senior guard who is backed up by Justin Anderson.

I personally feel Georgia may have one of the best all around offenses in the SEC. If Murray can step into the QB role, Georgia could be an offensive juggernaut in 2010.
Posted by Streit at 10:38 AM 7 comments:

Guest Post: Who is Mark Fox and what has he done to our team?

Friend of the blog and regular commentator here at B n' E, MT, attended the basketball game against Tennessee in Athens last night. Here are his thoughts on Mark Fox and how he is transforming Georgia basketball:

Who is Mark Fox and what has he done with our team?

We look more and more like a team that is starting to buy into Fox’s triangle system and believe in themselves. Even though Fox is dealing with a short bench, he is making the most out of his depth, with 11 players rotating in during just the first half.

Georgia led the rest of the way after 3 minutes into the game. Even though Bruce Pearl quickly turned on the full court press against Georgia for the rest of the game, we had little difficulty inbounding and moving the ball around, unlike in the Felton era. Once the game started to truly get out of hand, we surprisingly saw a lot of minutes from Stevie Pearl… I wonder why?
Travis Leslie’s dunk five minutes into the game blew the roof off of the Stegasaurous and will definitely end up in Sportcenter’s Top 10 tonight. Leslie has to be Georgia’s best recruiter right now, with the amount of highlights the WWL is giving him each game. I don’t think I have ever seen as many unmolested dunks as I did tonight, as Tennessee seemed to collapse on the driving player every time, opening up the paint.

The students were packed to the rafters over an hour before the game even started. There was a lot of good signs in the game, from “You shoot better off the court!” to a Tennessee hostess escorted by three USC clad students with Orgeron, Lane and Monte Kiffin masks. For some reason, there was also a student that lathered himself in peanut butter too. Ultimately at the end of the game, we were thwarted at storming the court. 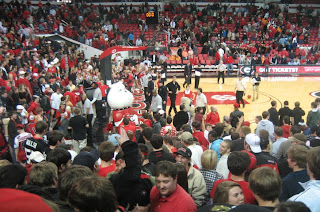 Chants echoed throughout the night, from “Where’s your handcuffs” to “Please don’t rob me!”

It was all good fun with our rivals to the north. The Vols showed up in jumpsuit-clad force, but after Leslie’s NBA Jam-esque dunk, they were not heard from again. It’s got to be noted that we’ve got one serious head ball coach, and we need to make sure he’s locked up for a long time. March Madness is a magical time and Georgia Nation deserves to be a part of it each year.
After this win, I think we can legitimately start talking about making the tournament this year. Sitting at 9-8 (1-3) with one of the nation’s most impressive schedules, a couple more big wins would put us right on the bubble. Add two wins in the SEC Tourney and we truly enter the discussion.
Posted by Streit at 7:51 PM No comments: