Let me take a quick timeout from our Georgia coverage to remind everyone that today is Opening Day in Major League Baseball. The Braves take on the Nationals today at 1:05, the first time in 20 years without Bobby Cox in the dugout. Baseball season still holds a special place in America, but if don't believe me, believe James Earl Jones:

In other news, G-Day is just two weeks away.
Posted by Streit at 8:50 AM 2 comments:

The Fiesta Bowl is in turmoil, firing its 30 year CEO John Junker, who had guided the bowl from its infancy to BCS-welterweight status. Jerry Jones must be salivating... 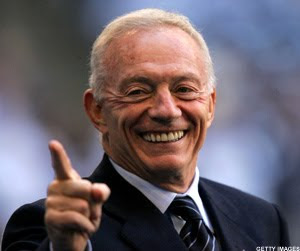 It's all part of the plan
Fiesta Bowl CEO Junker allegedly reimbursed employees for campaign contributions:

"The reimbursements, listed as at least $46,539, are an apparent violation of state campaign finance laws and the charter that allows the Fiesta Bowl its nonprofit status. The Arizona attorney general's office is conducting a probe of the matter."

While the Fiesta Bowl only dates back to the 1970s (and was originally modeled after the Peach Bowl), there is another older, historically prestigious bowl waiting in the wings to assume BCS status: The Cotton Bowl, which dates back to the 1930s and is soaked with history and cachet, which is practically currency in college football.
Right now, the BCS is in the middle of a TV contract with ESPN, locking in the BCS lineup until 2015. However, rest assured that Jerry Jones, Cowboys owner and the co-captain of the joint 1964 Champion Arkansas Razorbacks, is already blowing up the phone lines trying to line everything up. After all, the BCS Chairman has previously stated that he is willing to discuss the Cotton Bowl joining the BCS lineup with Jones.
The Cotton Bowl's prestige largely fell off due to the Southwest Conference's downfall, driven by recruiting scandals, as well as the 'Pony Express'/SMU Death Penalty in 1987. Additionally, until 2010 the game continued to play in the equally historic Cotton Bowl at the Texas State Fairgrounds, which is outdoors and not as modern as the ideal bowl site would be (ironically enough, SMU's downfall equally contributed to the Cotton Bowl Stadium's disuse, as the Mustangs had used the stadium as their home field until their attendance suffered post-Death Penalty).
With the right publicity and the ripe opportunity, no need for the Cotton Bowl to wait for the bowl system to change to a +1 bowl format or for the BCS to break up the rotating MNC game among current BCS locales. As the Cotton Bowl Athletic Association originally envisioned in their announcement, moving the game to Cowboys Stadium makes BCS membership ripe for the picking.
Posted by Gov Milledge at 10:11 PM No comments:

Tavarres King came to Georgia as a member of the 2008 recruiting class, in which he was raned as the #22 receiver in the country. For most teams, getting a top 25 player at wide receiver is a big deal. But the 2008 class also included uber-recruit AJ Green and King has spent his first three seasons in Athens in the shadow of #8.

Before I go any further, let me state for the record that Tavarres King will be a redshirt junior this fall. I have seen a number of places call him a senior, but anyone who follows Georgia closely knows that King is only a junior. He played in 4 games in 2008 and made a spectacular 41 yard catch against Arizona State. But his season ended early and he was granted a medical redshirt. For that reason, King is only a junior this fall.

King has spent the last two years starting opposite AJ Green at the splint end position for the Bulldogs. In 2009, he caught 18 passes for 377 yards and one touchdown, a 50 yard grab in the shootout victory over Arkansas. Last fall, his production increased once again, as hauled in 27 passes for 507 yards and three touchdowns. His most impressive highlight was a 63 yard touchdown against Florida.

With the graduation of Kris Durham and the departure of Green, the Dawgs will be without their top 2 receiving threats from last year. While the tight end position is deep in experience, the wide receiving corp is not. TK will move to the vacated flanker position this fall and will need to become the go-to receiver for Aaron Murray. Success for King should open up the other side of the field for the likes of Marlon Brown, Michael Bennett, and maybe Malcolm Mitchell.

If King continues to show the progression he has during his first three years, a 50 reception, 850 yard season with 7-9 touchdowns is a perfectly reasonable expectation.
Posted by Streit at 8:51 AM No comments: