77
Jersey number of Trinton Sturdivant, who returns at left tackle after missing the '08 season with a knee injury.
We look forward to the retun of the Trinton Sturdivant Dance Show this fall.
Posted by Streit at 5:00 AM No comments:

78
Yards rumbled down the field for a touchdown by defensive end Demarcus Dobbs after intercepting a pass against Central Michigan in 2008. Dobbs had two interceptions in 2008, the other being a game saver in closing minute against Kentucky.
Posted by Streit at 5:00 AM 2 comments:

Bowling with the Atlanta Falcons

Tonight, I had the pleasure of attending a charity bowling event put on by United Health Care and the Atlanta Falcons Rookie Club. The event, dubbed FootBowl, pitted teams of 5 paired with one Atlanta Falcons rookie. While there are no former Georgia players who are rookies with the Falcons this season, I knew there were a few guys from the SEC. When we arrived, I found out we were paired up with former Auburn long snapper Robert Shiver. Also sharing the lane with use was former Alabama quarterback, John Parker Wilson. 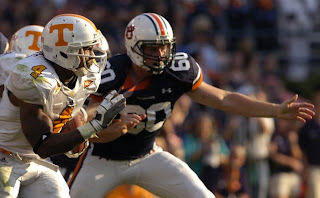 Robert Shiver played in 38 games during his career at Auburn. He is competing for the starting snapper job with the Falcons.

Robert Shiver, originally from Thomasville, GA, is looking to catch on with the Falcons as the long snapper. He said his entire family is Georgia fans and he said it really sucked being on the losing end of the Blackout game in 2007. I asked him what the major differences he has noticed between football in the SEC and in the NFL. He said the biggest thing is the complexity of the game, not just in how plays are called but how a minor mistake in execution can cause a major problem. We talked some about Tubberville being fired at Auburn, and he agreed that it was not a good move. Chizik was an assist with Auburn his freshman year, and he said he was not sure if he is the right man for the job. Only time will tell. 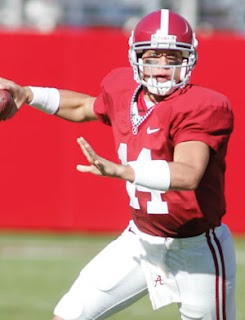 While I talked openly about the 2007 blackout with Shiver, I did not bring the game up with JPW.

John Parker Wilson, with his Alabama bangs, was another great guy to talk to. We talked a bit about playing in the SEC and I asked how it was having Nick Saban as a coach. He said off the field, he is a great guy and fun to be around. But on the field, he said is super intense and not really that much fun to be around. I also talked to him about his brother, Ross, who appeared on the MTV Show "Two-A-Days". He said that if it would have been him being filmed, he probably would have gotten into trouble and never have gotten into college. He said it sucked for his brother and he really didn't want to do the second season but kind of had to because he was the only returning guy and the quarterback. 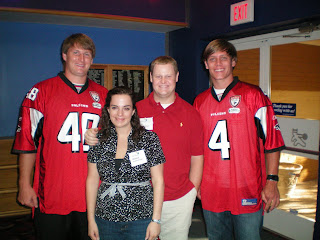 Overall, it was a great night of bowling and talking football. Robert Shiver and John Parker Wilson were both great guys to talk to and helped make this event a lot of fun. I wish them the best as they attempt to make the Atlanta Falcons for the 2009 season.
Posted by Streit at 8:19 AM 4 comments: 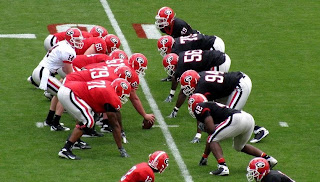 Yards passing for Joe Cox during the 2009 Georgia G-Day game. Cox takes over as Georgia's starting quarterback to begin the 2009 season.
Posted by Streit at 8:18 AM No comments:

81
Jersey number for Redshirt Sophomore TE Aron White. White heads into the 2009 season as the starter at tight end, replacing Tripp Chandler. Below is the highlight of White's 21 yard touchdown reception in the Capital One Bowl victory over Michigan State.
The play begins at the 3:15 mark.
Posted by Streit at 5:00 AM No comments:

I really can't add much to what Dr. Saturday has already said about the Alabama Shakespeare Festival's (ASF) play about Bear Bryant. I'm just as surprised as you are reading Shakespeare and Bear Bryant referenced in the same sentence.

Maybe ASF can get Gary Oldman and Tim Roth to play two bit players from Alabama's 1968 football team who have no control over their destiny but are just told to make the guy in front of them eat dirt over and over again...


Sorry, this was just an excuse to play my favorite scene from R&G Are Dead...who's serve?
Rosencrantz & Guildenstern Are Dead...and so is the Bear.

Is this ASF play Much Ado Nothing or is it A Midsummer Night's Dream for Alabama fans awaiting the autumn months?
Posted by Earl at 4:30 PM No comments:

Yards covered by Asher Allen's 2007 kickoff return for a touchdown vs. Kentucky. 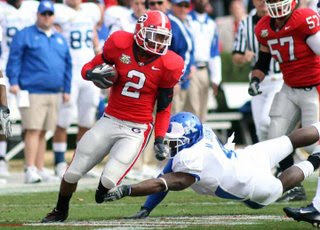 The special teams would also produce a blocked punt in the game and Georgia won, 24-13.
Posted by Streit at 5:00 AM No comments: 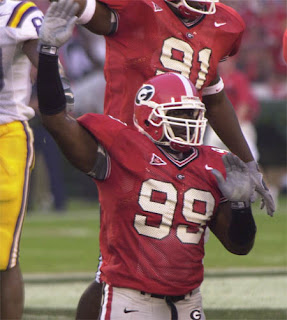