Spring is in the air (despite the temperature outside today) and that means we are in the middle of the best sports week of the year. It doesn't get much better than this: 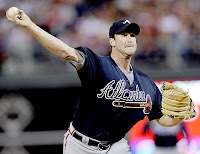 The Braves helped usher in the 2009 season by beating the Phillies on Sunday night. New ace Derek Lowe was masterful and homeruns by Brian McCann, Jeff Francoeur, and Jordan Schafer helped the Braves to a 4-1 victory. I look forward to some games at Turner Field soon.

The end of March Madness culminated in the National Championship game last night. The upstart Spartans of Michigan State were no match for the star-laden North Carolina Tar Heels. The Heels victory cost me the pool I was in (stupid Louisville!). 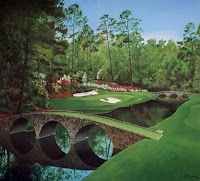 For one week each spring, the state of Georgia welcomes the world to the finest golf course on the planet. There will be plenty of drama this weekend, as we will see if Tiger Woods is truly back from injury or if Padrig Harrington or Phil Mickelson can continue their recent success. 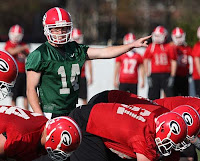 While the regular football season is still four months away, we get a chance to head back to Athens, set up a tailgate, and watch a little spring football. An added bonus this year: If it rains, we can stay home and watch the whole thing on ESPN.

Whether you love basketball, football, baseball, or golf, the first week of April 2009 is a great one. Enjoy it!

This Saturday will mark the end of Georgia's 2009 spring practice with the annual G-Day game at Sanford Stadium. While the game it self often tends to be boring, there is typically a large amount of excitement heading into the game. I went to my first G-Day in 2001 and just look at the stories that have surrounded the annual spring game each year since:

2001 - Coach Richt and the New Quarterback
- Coach Donnan was fired and replaced with Mark Richt, the young offensive coordinator from Florida State. While many people were excited about the new coach, the biggest headline was around the battle for the starting quarterback position. Quincy Carter had left Georgia, leaving the battle between Cory Phillips and redshirt freshman David Greene.

2002- Excited about Shockley
- After spending his true freshman year on the bench, Coach Richt's prized QB recruit would finally get to see the playing field.

2003 - Defending SEC Champions
- Coming off its first SEC Championship in 20 years, the Dawg Nation was still buzzing about the beat down of Arkansas and the win over Florida State. Fans had their eyes on the running back position, as Musa Smith had left early for the NFL leaving Tony Milton, Michael Cooper, amongst others, competing for the job.

2004 - Senior Leadership
- A senior laden team, led by David Pollack, David Greene, Reggie Brown, and Fred Gibson were expected to open the season in the top5 of most polls.

2005 - A Rebuilding Year?
- During the spring of 2005, most people had a feeling that Georgia would be rebuilding around senior QB DJ Shockley, finally getting his chance to start. Little did they know just 8 months later they would have the second SEC championship of Mark Richt's tenure in Athens.

2006 - Matthew Stafford's Debut
- The highest profile recruit of the Richt era enrolled early in 2006, allowing him to take part in G-Day. The freshman from Texas did not disappoint the fans, throwing a 67-yard touchdown pass to Mikey Henderson on hist first pass attempt.

2007 - Who is this Moreno guy?
- The coaches had been buzzing about this tailback from New Jersey who did not see the field as a true freshman in 2006. This was the first action for Moreno, who would put on a show that fall.

2008 - The Anticipation of #1
- After finishing the electric 2007 season #2 in the country, everyone was fired up about the possibility of opening the season at #1. There was much anticipation about the Bulldog debut of running back Caleb King as well.

So what are the stories for 2009? The competition at running back, the lack of healthy players, particularly DEs, seeing the freshmen quarterbacks, or just the fact that the game is on ESPN. Vote on the poll and leave your comments below.
Posted by Streit at 11:59 AM 2 comments:

During the broadcast of last night's Braves-Phillies season opener, Atlanta Braves rookie centerfield Jordan Schafer became only the 99th player in Major League history to hit a homerun in his first big league at-bat. For Braves fans and writers, Schafer has been on the radar for the last few years, considered by many to be one of the top prospects in baseball. That being said, you would think that ESPN's signature baseball telecast, Sunday Night Baseball, would be able to get his name right.

Well, you thought wrong. The reason why they could not get his name right was Mr. "I am the only person who can say Wilson Betemit's name right" Jon Miller. Twice in a matter of minutes, Miller referred to Schafer as "Logan Schafer". Then, he did it again a few innings later. Not that his esteemed colleagues, Joe "I'm in the hall of fame with a .270 average" Morgan and former Mets GM, Steve Phillips, would correct him.

Maybe after Schafer wins the Rookie of the Year, they will actually get it right.
Posted by Streit at 8:40 AM 7 comments: