Bringing Back Traditions: The Georgia-Clemson Rivalry

Other than Georgia Tech, no other Division I football program is closer to the University of Georgia(in distance) than Clemson. The orange clad Tigers sit a mere 75 miles away, tucked in the hills behind Lake Hartwell. The two teams have squared off 62 times on the football field, with Georgia having a distinct lead, 41-17-4, in the series. While the two teams will square off again during the 2013 and 2014 seasons, it will mark the first time in over ten years the two teams have met. For these two teams who were once considered rivals, this is clearly unacceptable.

South Carolina, Clemson's instate rival, shares a nearly an identical record against Georgia. The all-time series against the Gamecocks stands at 45-14-2. South Carolina, who considers Georgia a rival, has met us on the football 61 times, once less than Clemson. If you consider that Georgia has played South Carolina every year since 1992 since USC joined the SEC, Clemson-Georgia is actually the match up with a much longer history. An annual match up with Clemson would feel much more like a rivalry to me than our battle with Carolina every year.

Another reason I think this rivalry should be reinstated as a yearly affair is the similarity between our two schools. Both teams found great success during the early 1980's, with Georgia taking the Championship in '80 followed by Clemson in '81. Since that time, neither team has made it back to the top however both teams are generally considered contenders for the National Championship. This video from the 1987 game helps paint the picture:

As a student, I was lucky enough to see Georgia beat Clemson twice. The first time was the opener in 2002, a nail-biter that would kick-off Georgia's run to the SEC Championship. Georgia's running game was struggling and David Greene had one of his worst days as a Dawg. But freshman DJ Shockley threw for a touchdown and ran for another, as Georgia overcame a 7 point fourth quarter deficit to win 31-28. 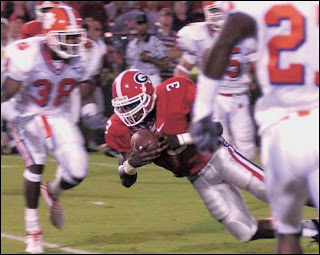 It was Shockley to the rescue in this game.

The following year the Dawgs beat down the Tigers in Death Valley, 30-0, and kicked off another season that ended with a trip to Atlanta.

I think it is cool that Georgia is trying to schedule more opponents from across the country, such as Arizona State and Oklahoma State, but if we are looking for another out of conference team to play on a regular basis, we should look no further than just up I-85.

As a student at The University Georgia, most of us took part in the tradition of ringing the bell at the University Chapel on North Campus following a victory. The ringing of the bell has been a university tradition since the 1890's, when the playing field was located much closer than it is today. After the 2007 victory over Florida, so many fans rang The Bell, that it came loose and had to be refurbished prior to the 2008 season. 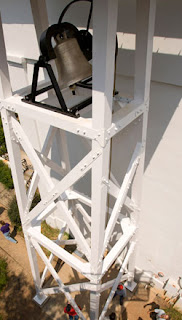 While I think it is cool that many alumni, kids, and fans line up to ring the bell after a victory, one thing bugs me:
Freshmen are the ones who are supposed to ring the bell.
The old tradition was that from the time the game ended until midnight, freshmen were supposed to line up and take turns ringing the bell. While it is nice that six year old Dawg fan Austin from Marietta is getting to ring the bell, it is not the tradition! The other thing that bugs me about freshmen not manning the bell is that it does not continue to ring until midnight. I have been walking through North Campus following games in recent years and many times, just a few hours after the game, the bell has gone silent.
I'd rather see a line of freshmen dressed in their game day attire ringing the bell than this idiot.
In the current world we live in, making freshmen man the bell is seen as a form of hazing. Are you freaking kidding me? If I had it my way, not only would they be ringing the bell, but they would do it while wearing red and black beanies like they made the freshman wear during fraternity rush in Animal House. 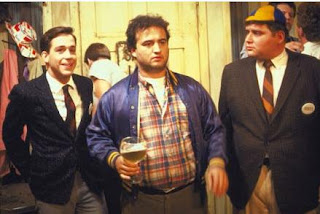 "Fat, drunk, and stupid is no way to go through life son."

Labels: Things that Bug Me, Traditions

The Bulldogs from Starkville came to Athens this past weekend to take on the #4 ranked Diamond Dawgs and Georgia sent them back home with their tails between their legs. Georgia swept the series from Miss. State in front of the largest three game crowd ever at Foley Field.

Friday night's game saw Trvor Holder improve his record to 4-1 on the season, as the Dawgs held on to win 5-3. Matt Cerione had a homerun and Dean Weaver closed the game out for Georgia. Lyle Allen and Joey Lewis had homeruns, and Alex McCree returned to make his first start since Feb. 28, as the Dawgs shut out Mississippi State in game 2, 4-0. The final game of the series saw the Dawgs rally to score 7 runs in 8th inning and secure the sweep. Jeff Walters picked up his second win of the season in relief of starter Justin Grimm, who had a career high of 9 strikeouts.

Georgia's record now stands at 19-2 after taking all three from Mississippi State, who came into the series ranked 25th in the nation. This includes an amazing 14-0 record inside the friendly walls of Foley Field. The Dawgs take on Wright State on Tuesday before traveling to Atlanta to take on Georgia Tech on Wednesday. This weekend, they will face Tennessee up in Knoxville.
Posted by Streit at 8:29 AM No comments: