Which is Better: An Off Week or a Cupcake?

Watching Alabama absolutely thrash Georgia State (as expected) last night, a question popped into my head: Is it better to have an off week or play a cupcake opponent the week before a big game? This is the scenario that is playing out before the Iron Bowl next week. Auburn is off this weekend after defeating Georgia while Alabama played a first year program in Georgia State that they could have beaten with their walk-ons playing the whole game. Here are my thoughts on each:

Off weeks are typically never a bad thing in college football, particularly when they occur later in the season. In addition to two weeks to focus on one opponent, they allow the chance for a team to get healthy. We all know that Florida often schedules an off week prior to Georgia game. As he has done in the past, Urban Meyer used this extra week this season to add a wrinkle to his offense that made it difficult for Georgia to prepare. Florida's success in the last two decades, while not entirely the result of the off week scheduling, at least shows the value it has to have an extra week to prepare. Georgia is fortunate to have its off week this week as quarterback Aaron Murray is banged up and would most likely be unavailable to play.

While having a week off is great, I almost think that scheduling a cupcake game may actually be a better option. Particularly since almost every team has at least one 1-AA game on its schedule, why not play that game the work before a big match up? You can still take advantage of the game planning you would with an off week but it also gives you a chance to put any wrinkles into action. If a starter is hurt and needs the time off, there is no fear about resting them. Plus, if the team is playing well, you won't lose the momentum you had by not playing at all.

Given the choice of scheduling a weak opponent against an off, particularly late in the season, I would lean towards the cupcake. I think Alabama will be in a much better position than Auburn heading into next week. While they may have been preparing for Auburn some this week, the Georgia State game offered them a break from the pressure of winning their biggest game of the season.

Please give your thoughts an opinions in the comments.
Posted by Streit at 1:30 PM 1 comment:

It's a bye week, I'm not traveling, just 16 hours of college football on my couch, watching the tube.

Georgia Tech: What is at Stake?

The Auburn game is over. It is time to set our sights on our final opponent of the 2010 season, the Georgia Tech Yellow Jackets. While it is always fun to beat up on the nerds, this year's game is even more important because of the struggles the Dawgs have had this year. Here's what is at stake:

- A bowl game. While some people would say that going to a low tier bowl is pointless, I completely disagree. A bowl game means you get an extra 15 practices. It also one more chance to appear on national television, which is always important in recruiting. Playing Central Florida or East Carolina may not be who we want to be playing to end our season, but it always better than ending the year against Georgia Tech.

- A winning season. Georgia has not had a losing season since Jim Donnan's first year in 1996. A win against Tech will send us to a bowl game against a bad opponent, meaning the Georgia should be able to keep this streak going. Think about it this way, Auburn went 5-7 in 2008 and they are now undefeated. Finishing above .500, while not that big of a deal, could mean a lot to the teams' confidence heading into next year.

- The best 10 game stretch against Georgi Tech...ever. Georgia has never won 9 of 10 games against Tech (though we have won 8 of 10 a few times). This would mark the best decade ever against NATS. While Coach Richt has struggled with Florida, he certainly has owned Georgia Tech.

I know a lot of people have given up on this season. Everyone is just ready to get it over with and move on to the offseason, where hopefully some answers will be found. But I ask all Georgia fans to show up on Sanford in two weeks because despite the bad season, this game still has an awful lot of meaning.
Posted by Streit at 2:10 PM 8 comments:

Auburn Fans Sure are an Angry Bunch

Wow. I can honestly say I am shocked at the responses coming from Auburn fans since the game on Saturday night. During my time as a Georgia fan, I have NEVER had any type of hatred toward Auburn. As a matter of fact, I would almost venture to say that Auburn was my second favorite team in the SEC. The key word being WAS.

Not any more. I have lost respect for the Auburn football program but even more so its fans. Here are the reasons.

1. Georgia fans are mad at Nick Fairley for his reckless play on the field. Yes, we understand that there other personal fouls called in the game. Yes, there are dirty plays that take place on the line. But if anyone has a history of dirty chop blocks, its Auburn (any one remember Glenn Doresy?) This was an emotional game and I know there were plenty of cheap shots. But the hits by Fairley were blatant. Fairley has been known for these types of plays, this was not an isolated incident of a player being made for being chop blocked. The hit to Murray's back may have been the dirtiest play I have ever seen on a football field.

***UPDATE - At Least one Auburn fan agrees about the Fairley hit on Murray. This from "Track'em Tigers":

"Having said that, we also saw one of the dirtiest quarterback hits of the year out of our own Nick Fairley. It was not the play that injured Murray, though. It was the helmet hit in the back that negated a stop by the defense in the 3rd quarter. It was a brutal, dangerous, needless play. Either player could have been paralyzed on the play. I would not be surprised to see the NCAA adopt a "Nick Fairley" rule next year, and start handing out suspensions for big hits on "defenseless" players. I'd also look for the refs to be quick with the laundry in the Iron Bowl."

Also, the Auburn arguement that Fairley was blocked into Murray on the last hit is ridiculous. Here is the sequence of the hit:

A. As Murray releases the ball, Cordy Glenn pushes fairley to the right (in the picture) away from Aaron Murray: 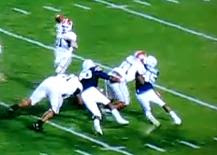 B. Next, Glenn is behind Fairley still pushing his back away from Murray. 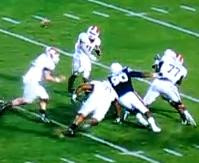 C. Fairley is now past Glenn and starts to dive toward Murray.

D. Fairley hits Murray, you can see his head on the other side of Ben Jones.

2. Trooper Taylor's reaction to the scuffle. Trooper Taylor runs after Fairley, but instead of grabbing him and pulling him to the side, lets him go on doing his little celebration. The refs were too busy dealing with other players, or this would have surely been an ejection. Remember, AJ Green got flagged for simly walking towards the crowd after a TD catch. Standing all alone 30 yards away from anyone else and doing the "belt sign" is pathetic.

3. Auburn fans booing Reuben Faloughi when he was injured. This was disgusting. I understand Auburn was running a hurry up offense and wanted to snap the ball fast, but booing Faloughi and saying he was faking the injury was ridiculous. Go back and watch the replay. Faloughi got hit on a block (a legal form of a chop block, mind you) at the ankles and fell to the ground. He tried to get up but after taking a few steps, he fell back to the ground. The trainers had to come out and help him off the field. This kid is a WALK-ON who has earned playing time and has a reputation as a hard worker. Faking injury does not fit the bill and clearly he was hurt. No one should ever boo a kid who is down on the field with an injury, regardless of the desire to run a hurry-up offense.

4. The hate and defensiveness coming from the Auburn fans since the game. Auburn fans, YOU WON THE GAME. You clinched the SEC West and your undefeated season is still in tact. Cam Newton played amazing and is clearly the best player in college football this season. There is tons to celebrate, yet almost everything I see is trying to spit hate at Georgia. Once again, most Georgia fans are not mad about the game. We lost on the field, there is not denying that. We are just upset of the actions of a team and fan base that is usually very classy. Your great season should be a celebration of your team, not a chance to try and ridicule the opponents that you beat along the way.

I hope Auburn is enjoying this situation. Just remember, you reap what you sow. If Cam Newton is indeed ineligible and this great season is wiped away from the record books, you will hear no sympathy from me. Good luck in Tuscaloosa in two weeks because I am sure Bama will be ready to fight dirty right back at you.
Posted by Streit at 11:01 AM 15 comments: