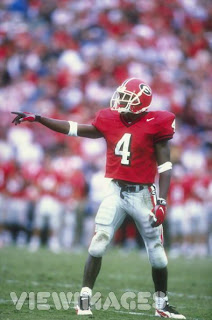 The year (1998) when Georgia Cornerback Champ Bailey won the Bronco Nagurski Award, given annually to the nation's top defensive player. Bailey would go on to an All-Pro career in the NFL with the Washington Redskins and Denver Broncos.
Posted by Streit at 5:00 AM No comments:

A Note on Recruiting

I just want to say one quick thing about recruiting: I laugh at people who think that Georgia's recruiting has taken a step back. While I might not care about a 2011 recruit right now, or a 2010 recruit for that matter, I sure do care about 2009 signees right now.

Looking at the 2009 class in the Athlon magazine covering the SEC, Georgia just might've done the best job in the conference. Athlon lists their top 40 incoming freshmen in the SEC (on page 69). There are 4 players from the state of Georgia. That seems unusually low for the state, but Georgia has signed all 4 players.

Not one of those players went out of state to play at another SEC school.

Meanwhile, there are 9 players on the list that are from the Southeast but signed with an out-of-state SEC school. Georgia leads the way, signing 4 of those 9 players. 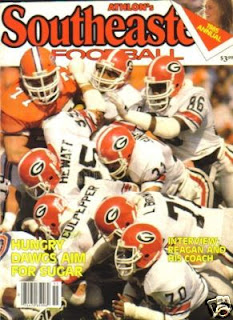 Athlon's been doing this for a while ya know...was there an Athlon top 40 when Knox Culpepper (middle) committed to Georgia?

So, by my count, that's an impressive list for Georgia, hauling in 8 of Athlon's top 40, keeping all the in-state kids on the entire list, and essentially being the biggest player in the SEC for out-of-state talent across the Southeast.

Bascially, the only two SEC schools that didn't lose any in-state players on Athlon's top 40 were Georgia and Alabama.

What would Lewis think about moving the Georgia-Florida game? 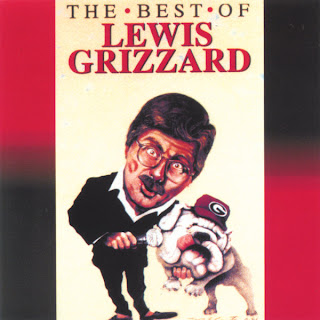 I was wondering what Lewis Grizzard might have thought about the current controversy surrounding the location of the Georgia-Florida game when I came across the article below, written in November of 1992. I'm not sure he would have the same opinion today, seeing as the game did go to a home and home during the late 90's and Florida proceeding to hang 50+ on us in Athens.

Jacksonville - The universities of Georgia and Florida, both fine schools, need to make an immediate decision to move their annual football game out of this city's Gator Bowl before somebody gets killed. Jacksonville can't handle this thing anymore. No city could. Putting an equal number of Florida and Georgia fans, who absolutely hate each other, together in an 82,000-seat stadium just invites disaster. This isn't the World's Largest Cocktail Party anymore. It's the World's Largest Crazy House. There are about 40,000 Georgia fans and a like number of Florida fans in the Gator Bowl on a Halloween Saturday night, and rival fans often sit near each other. The taunting never stops. Some of it is fun, but most of it is not. This rivalry has become so intense, it's primed for a riot. There already have been brawls. I remember a year when Florida students stormed the field after the game and tried to destroy it. A Georgia student rushed onto the field and tackled a couple of shirtless guys carrying away part of a goal post. Five or six Florida students then beat the kid from Georgia to a pulp. It was just as ugly and just as mean here Saturday night. Maybe worse.

I went to Georgia and I'm biased, but I witnessed behavior Saturday night in the Gator Bowl I'd never seen at a college football game before. When it was over, and Florida had won 26-24, a few of the Florida players strutted arrogantly in front of thousands of Georgia fans, and made obscene gestures. One Gator grabbed his crotch in front of the Georgians. Another gave a pelvic thrust and shouted an obscenity. The players left, but then returned to rub it in further. A man who I presume was a Florida coach finally had the decency to shove the players away. Leaving the stadium, Florida fans barked directly into the faces of Georgia fans. Georgia fans retaliated with explicit instructions on what the Gator fans could do with their victory. And to think people used to wear coats and ties to college football games, and shook hands at game's end. I stood in front of my car with a group 0 fellow Georgia fans for an hour after the game. We were insulted by passing motorists or Gators strolling by about every two minutes. A drunken teenage girl told us to eat something humans don't eat.

It's out of control. And it's no longer fun. Orlando wants the game, but Georgia doesn't want to play the Gators any deeper in Florida. The best idea is to make the series a home-and-home arrangement. That way the visiting team would get only a few tickets and there wouldn't be this 40,000 versus 40,000 situation, and more control could be administered. "I'll never come back here," a Georgia friend told me Sunday morning. "I'd like to get Florida between the hedges in Athens every other year, and when the game's in Gainesville I'll just watch it on TV. In other countries, soccer fans riot and kill one another. Georgia-Florida in the Gator Bowl isn't that yet, but go home-and-home before one Halloween night it becomes a nightmare.

- This article appeared in the AJC in November of 1992. Please check out more of Grizzard's work at http://www.lewisgrizzard.com/.
Posted by Streit at 11:34 AM 1 comment:

Number of combined starts for the returning offensive linemen for 2009 Georgia Bulldogs. (Note: This does not include starts for Kiante Tripp, who has moved to the defensive line for the 2009 season.) 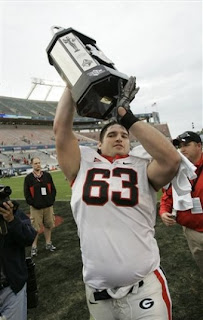 This group is lead by guard Chris Davis, who has made 26 starts on the offensive line during his Bulldog career.
Posted by Streit at 5:00 AM No comments: 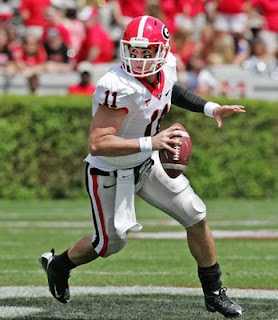 Of the top 100 rated recruits of the 2009 class, Georgia signed 7 to football scholarships. These include WR Marlon Brown, DB Branden Smith, TE Orson Charles, and QB Aaron Murray who were all rated as 5 star recruits.
Posted by Streit at 5:00 AM No comments:

“I’m sure it’s something that’s appropriate for Tech..."

Georgia Tech Athletics announced a deal today to outsource its ticket sales to the Aspire group, a marketing agency ran by Bernie Mullen. Despite a mass marketing campaign last year, Tech sold less season tickets in the first year under Paul Johnson than it had in the final year under Chan Gailey. Apparently, they are now going to abandon mass advertising and let Aspire handle things. 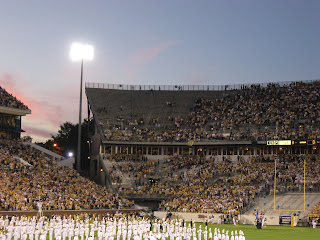 Empty seats at Bobby Dodd. This is just pathetic.

A reporter asked Damon Evans if Georgia would consider a similar deal. I love his response:

“That’s not something we’re interested in,” Damon Evans said. “I’m sure it’s something that’s appropriate for Tech but our ticket operations are fine.”

Read the full story on AJC.com
Posted by Streit at 4:05 PM No comments:

As many of you follow SEC football religiously, you've probably read about or even heard the audio from SOS dressing down Junior yesterday while waiting for an elevator at the SEC meetings in Destin. While the situation is truly funny and Spurrier taught Junior a lesson in just how to talk trash in the SEC, I'm glad our coach isn't involved in any of this. It just serves as another example of just how lucky we are to have Mark Richt as our head coach. Of course, if every coach in the SEC were like Richt, these meetings would be very boring...and the SEC meetings are usually far from boring. 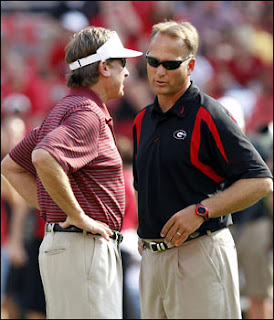 "Mark, I just told him to go to his room and wait until I called for him." 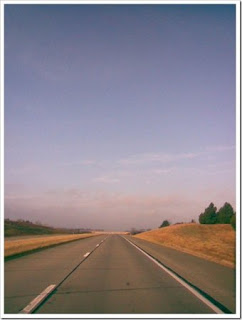 For any of you planning to drive to Stillwater, be prepared to see a lot of this.

The 2009 season is approaching fast and tomorrow we begin our countdown of the 100 days until the start of the football season. For those of you who may have disappeared over the last few months since the end of the 2008 season, here's a wrap up of what's happened in the Dawg nation since then:

- Matthew Stafford and Knowshon Moreno left school early for the NFL. Both were selected in the first round, with Stafford going #1 overall to the Lions.

- Joe Cox has taken the reins at quarterback and looks to be ready to take over the team this fall.

- G-Day was played before a national television audience on ESPN, with the red team winning a slow game, 13-3. Carlton Thomas scored the games only touchdown in the closing minute of action.

- Controversy has arisen about whether to move the Georgia-Florida game away from Jacksonville.

- The Athletic Association announced a $40 million expansion to Butts-Mehre,including an indoor multi-use facility.

Check back tomorrow (and everyday) as we countdown the days until the 2009 season.