Eleven months from now, myself and a great number of Georgia fans will make the long cross country trip to see Georgia take on the Colorado Buffaloes. Boulder is supposed to be a great town and home to historic Folsom Field. ESPN has a nice feature story up right now about Colorado's home stadium and it is a good read for anyone planning to make the trip next fall.
Folsom Field is also famous for holding conecerts, including the Dave Matthews Band every year.
Can't wait to see the Bulldog Nation invade the Rockies next fall!
Posted by Streit at 11:27 PM 1 comment:

Is it just me, or have the Dawgs been involved in the national spotlight more this year (when we are not very good) than in 2005, when we won the SEC Championship? First it was on the cover of SI after we lost to Oklahoma State, then it was at the head of SEC Ref gate with the personal foul call against LSU, and now eye gougin incident with Brandon Spikes. With the record at 4-4, these things may end up being what the 2009 Georgia Bulldogs are remembered for and that is just sad. Georgia has a shot to repair their image, if we can somehow get it together like we did down the stretch in '06. A couple of big victories could put us back into a decent bowl game and a chance to end the year on a high note.

As for this week's opponent, Tennesse Tech, there is no point in a long drawn out preview. They are a middle of the road (at best) 1-AA school who got blasted by Kansas State earlier this season. This will be far the weakest team Georgia has faced all season. Records and stats do not matter, because the level of competition is no where near the same. Georgia should be able to beat this team with nothing but back ups.

This year's homecoming game should bear more importance than it has in year's past. Georgia is coming off of three straight road contests which saw the Dawgs drop two of three. Georgia has not played a game in Sanford in a month and needs to show the fans that despite the record on the field, this team is still trying to get better.

I think the Dawgs play mad, the coaches play mad, and the team shows up to a 1:00 game for once. Big stats for King and Ealey. Defense will probably give up more points than the fans will like, but it won't matter in the outcome.

Just What the Doctor Ordered: Homecoming

The basic idea behind scheduling a homecoming opponent is making sure that your team will win the game. For Georgia, the game is usually just before or just after the Florida game and usually involves either Vanderbilt or Kentucky. For the 4-4 Georgia Bulldogs, this year's homecoming game against 1-AA foe Tennessee Tech is chance for the team to put on a good show for the Dawg Nation that has had to sweat almost every game this year.

Since 2000, Georgia has gone 9-1 in homecoming games. The one blemish came against Vanderbilt in 2006, as the Dawgs lost 24-22 on a last second field goal. With the exception of the 2006 loss, Georgia has failed to win homecoming by less than 10 points only one other time in the decade. That came against the Blazers of UAB, who put a scare on the Dawgs in 2003 (the final was Georgia 16, UAB 13). UAB also has the honor of being the only non-SEC school that served as Georgia's homecoming opponent more than once in the decade.

Georgia has won their last 9 homecoming games by an average score of 33 to 19. The Dawgs have three times scored more than 40 points in the game, most recently scoring 44 against Troy in 2007. While Georgia may have struggled in recent weeks, I would be very surprised if the Dawgs are held under 40 this week (even with AJ Green out).

Homecoming should be a lot of fun and hoepfully Georgia scores a lot. I am also looking forward to one of my favorite parts of homecoming, hearing the Alumni cheerleaders chant "Red and Black and Silver Britches, Give'em hell you sons 'a bitches!" Hopefully, our boys will actually be wearing the silver britches this week.

Something to Take Your Mind Off Football

And I know it aches
And your heart it breaks
And you can only take so much
Walk on, walk on

Home...hard to know what it is if you never had one
Home...I can't say where it is but I know I'm going home
That's where the heart is


Florida is over. It is time to move on. At 4-4, the Dawgs still have a lot to play for. Georgia has won at least 8 regular games in every season under Mark Richt. While winning the final four may seem like a stretch at this point, is it really that unthinkable that we could at least finish 3-1 with a shot to pick up win 8 in the bowl game? Joe Cox will be our quarterback, whether we agree with the decision or not, and Willie is not going anywhere until at least the off season. Let's quit worrying about the last month and focus at the task at hand.

Turning the ship around begins this weekend against Tennessee Tech. While most teams have some easy warm up game where they get to put up big numbers and rest the starters during September, the Dawgs get their chance in early November. With an important match up looming with the Auburn Tigers, the Dawgs must get right and get healthy. AJ Green is out this week and I think he should enjoy his week of rest. He has carried the Dawgs on offense and his absence will make someone else step up. Georgia must put together a complete game and dominate Tennessee Tech, not only to get back to winning but to win back fans who are questioning where the program is headed.

For those of you in the Bulldog Nation who are thinking about skipping the game this weekend, this is not the time to make the excuse that it is only Tennessee Tech. The team needs the fans right now and after being gone for a month, it would really help to play before a packed house at home. I'll be there Saturday, decked out in red and black, ready to root on the Dawgs. I hope to see everyone in Sanford on Saturday.

Everyone Pray for Chance Veazey

For those of you have not heard, Georgia freshman baseball player Chance Veazey was injured in an accident last week. You can find the full story in the AJC.

Chance is in the thoughts and prayers of all of us here at Bubba N' Earl.
Posted by Bubba 'N Earl at 11:03 AM No comments:

There is a fifth dimension, beyond that which is known to man. It is a dimension as vast as space and as timeless as infinity. It is the middle ground between light and shadow, between science and superstition, and it lies between the pit of man's fears and the summit of his knowledge. This is the dimension of imagination. It is an area which we call the Twilight Zone. 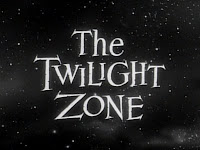 That's right folks, the college football world has officially entered the Twighlight Zone as nothing is right or where we thought we would be. This weekend's matchups lived up to the Halloween hype, with BCS dreams all but crushed for some, contenders exposed as pretenders, underdogs playing like giants, and giants embarassing dawgs. Without futher delay, lets take a look at our matchups.

First up, Oregon is for real. UCS is on a downward slope in the Pac-10 and Oregon has been the team to usher in the new era. What most of you thought was supposed to be USC establishing their right to be a BCS contender turned out to be Oregon's statement of their dominance of Pete Caroll and the Trojans. In a world turned upside down, the mighty D of USC looked absolutely stupid as they tried to stop Jeremiah Masoli and the Ducks....and the Ducks did it wearing their regular uniforms.

In the second strange game of the weekend, Okie State was supposed to own UT this year with their "world's best offense" and the fact that this series has come down to the wire in previous years. Well, the Cowboys entered into the Twighlight Zone because nothing went their way. Penalties, poor officiating and not to mention Colt McCoy and company managing to show up proved that Okie State is not yet ready for prime time or the BCS. On the other hand, LSU showed they do indeed have an offense (even if it was against Tulane) as they shut out the Green Wave and proved they are ready for their prime time matchup against the Crimson Tide. 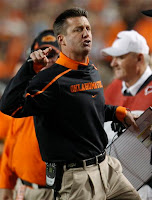 The middle ground between light and shadow revealed some men's fear and their lack of knowledge as we saw in our SEC games. Everyone seems to forget that Tennessee has the talent to win, and judging by the picks this week I'm right. But more importantly the Vols have what it takes to win in the SEC each week. No, I don't mean black jerseys, I mean the defensive genius named Monte Kiffin. It wasn't Crompton who led the Vols to their 31-13 win, it was the defense who cashed in on SUC turnovers. Keep an eye out on UT because next year they won't be the underdog in the SEC East. Speaking of underdogs, UGA has officially rolled over and gone to sleep. Mark Richt and his staff must have exhuasted every option in sparking the Dawgs because I could have swore we saw Grambling play Florida at the WLOCP. A gimmicky look hear, a trick play there, a splash of color and a fabulous new look ain't going to fix the Dawgs and it showed Halloween night. This team looked frightened and frighteningly bad.

Doing it right and looking good.... 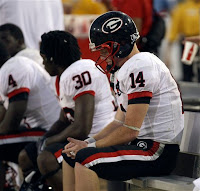 ...doing nothing and looking bad

Continuing our journey into the Twighlight Zone, we can now see that the Geek has inherited the earth...well at least the top spot in the ACC. Paul Johnson and his Yellowjacket spread option offense are proving that they have to be taken seriously. This team has managed to win and adjust their play each week to meet the matchup they face. Its not pretty, its not always high scoring and its definitely not high flying football, but it is good, solid, football and most of you agree. However, most of you were shocked to see a resurgent Auburn team (now bowl eligible) stomp Ole Miss. I'll admit, I was having my doubts, but Guz Malzahn and the Tigers put up 400 yards on the Rebels, including 31 unanswered points through the 3rd quarter. Don't bet against the Tigers next week as they face Furman. 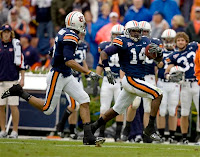 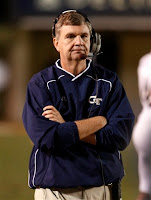 Don't count the Tigers out and especially not Paul Johnson

Now with that out of the way, let's see who managed to escape Halloween entact:

Our Bottom Feeder of the Week remains mmike032. He is 21-79 overall but it looks like he is threatening to climb out of the cellar with his 5-5 record this week. Looks like you've been using www.flip-coin.com to help you with those picks.

Next week's matchups will be a bit of a breather for us since most everyone has a homecoming game. However, the big matchups will be LSU vs. Alabama in a fight to determine the SEC West contender, Ohio State vs. Penn State in Big 10 play, SUC vs. Arkansas and in just because...Army vs. Air Force. Good luck!
Posted by AUMaverick at 8:00 AM 1 comment: