Give me a Liberty Bowl Victory or give me death!

(Below is an updated version of the famous "Give me liberty or give me death" speech given by Patrick Henry to the House of Burgesses es on March 23, 1775. When I began looking at the speech, I realized much of the content fit perfectly with the current situation facing the Georgia Bulldogs. Please note the this is almost the entire original speech. The only changes I have made are highlighted in RED.) 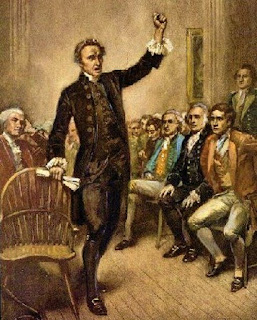 No man thinks more highly than I do of the Georgia Bulldogs, as well as the abilities of the very worthy gentlemen who have donned the Red and Black this fall. But different men often see the same subject in different lights; and, therefore, I hope it will not be thought disrespectful to those gentlemen if, entertaining as I do, opinions of a character very opposite to theirs, I shall speak forth my sentiments freely, and without reserve. This is no time for ceremony. The question before the Bulldawg Nation is one of awful moment to this country. For my own part, I consider it as nothing less than a question of respectability; and in proportion to the magnitude of the subject ought to be the freedom of the debate. It is only in this way that we can hope to arrive at truth, and fulfil the great responsibility which we hold to the Alumni and our country. Should I keep back my opinions at such a time, through fear of giving offence, I should consider myself as guilty of treason towards my team, and of an act of disloyalty toward the majesty of Sanford Stadium, which I revere above all earthly stadiums.
Dawg fans, it is natural to man to indulge in the illusions of hope. We are apt to shut our eyes against a painful truth, and listen to the song of that siren till she transforms us into beasts. Is this the part of wise men, engaged in a great and arduous struggle for liberty? Are we disposed to be like the NCAA who, having eyes, see not, and, having ears, hear not, the things which so nearly concern their temporal salvation(like Cam Newton’s father soliciting his services for money)? For my part, whatever anguish of spirit it may cost, I am willing to know the whole truth; to know the worst, and to provide for it.
I have but one lamp by which my feet are guided; and that is the lamp of experience. I know of no way of judging of the future but by the past. And judging by the past, I wish to know what there has been in the success of Mark Richt’s coaching staff for the last ten years, to justify those hopes with which Georgia fans have been pleased to solace themselves? Is it the 14 -11 record over the last two seasons with which our petition has been lately received? Trust it not, sir; it will prove a snare to your feet. Suffer not yourselves to be betrayed with a kiss. Ask yourselves how this gracious reception of our petition comports with these war-like preparations which cover our field and darken our campus. Are blowout victories necessary to a work of love and reconciliation? Have we shown ourselves so unwilling to be reconciled, that force must be called in to win back our love? Let us not deceive ourselves, sir. These are the implements of war and subjugation; the last arguments to which Gators resort. I ask, gentlemen, sir, what means this martial array, if its purpose be not to force us to submission? Can gentlemen assign any other possible motive for it? Has Central Florida any enemy, in this conference, to call for all this accumulation of navies and armies? No, sir, she has none. They are meant for us; they can be meant for no other. They are sent over to Memphis to bind and rivet upon us those chains which George O’Leary has been so long forging. And what have we to oppose to them? Shall we try argument? Sir, we have been trying that for the last ten years. Have we anything new to offer upon the subject? Nothing. We have held the subject up in every light of which it is capable; but it has been all in vain. Shall we resort to entreaty and humble supplication? What terms shall we find which have not been already exhausted?

Let us not, I beseech you, sir, deceive ourselves. Sir, we have done everything that could be done, to avert the storm which is now coming on. We have recruited; we have practiced; we have gameplanned; we have defeated our in-state rival, and have been relegated to the Liberty Bowl by the tyrannical hands of the NCAA and BCS. Our victories have been slighted; our losses have produced additional violence and insult; our talents have been disregarded; and we have been spurned, with contempt, from the foot of a New Year’s day bowl. In vain, after these things, may we indulge the fond hope of peace and reconciliation. There is no longer any room for hope. If we wish to be great, if we mean to preserve the national perception and privileges for which we have been so long contending, if we mean not basely to abandon the noble struggle in which we have been so long engaged, and which we have pledged ourselves never to abandon until the glorious object of our contest shall be obtained, we must fight! I repeat it, sir, we must fight! An appeal to arms and to the Ghost of Erk Russell is all that is left us!
They tell us, sir, that we are weak; unable to cope with so formidable an adversary. But when shall we be stronger? Will it be the next week, or the next year? Will it be when we are totally disarmed, and when a Florida or Auburn fan shall be stationed in every house? Shall we gather strength by irresolution and inaction? Shall we acquire the means of effectual resistance, by lying supinely on our backs, and hugging the delusive phantom of hope, until our enemies shall have bound us hand and foot? Sir, we are not weak if we make a proper use of those means which the God of nature hath placed in our power. Bulldawg Nation, armed in the cause of victory, and in such a state as that which we possess, are invincible by any force which our enemy can send against us. Besides, sir, we shall not fight our battles alone. There are just coaches who preside over the destiny of this team; and who will raise up friends to fight our battles for us. The battle, sir, is not to the strong alone; it is to the vigilant, the active, the brave. Besides, sir, we have no election. If we were base enough to desire it, it is now too late to retire from the contest. There is no retreat but in forfeit! Our chains are forged! Their clanking may be heard from the hills of Athens to the beaches of Jacksonville! The war is inevitable and let it come! I repeat it, sir, let it come.
It is in vain, sir, to extenuate the matter. Gentlemen may cry, Glory, Glory, but there is no glory. The war is actually begun! The next game that sweeps from the north will bring to our ears the clash of resounding arms! Our brethren are already in the field! Why stand we here idle? What is it that gentlemen wish? What would they have? Is a pro career so dear, or money so sweet, as to be purchased at the price of losses and embarrassment? Forbid it, Almighty God! I know not what course others may take; but as for me, give me a Liberty Bowl victory or give me death!
Posted by Streit at 2:28 PM 3 comments:

Random Thoughts on the Liberty Bowl

In two days, Georgia will wrap up the 2010 season against Central Florida in the Liberty Bowl. To say this season has been a disappointment is an understatement. 6-6 is definitely not the norm and should never be considered acceptable in Athens. I thought about doing a full preview for the game, but to be honest, my heart isn't into it. Here are my quick thoughts about the game.

- AJ Green's final appearance? The chance that AJ comes back is basically non-existent. We all know he is gone, so we should enjoy seeing him play in the red and black one last time.

- A Familar Face. George O'Leary lost his final game against Georgia as the Georgia Tech coach in 2001 when Billy Bennett hit 6 field goals in the Georgia victory. After losing the Notre Dame job for lying on his resume, O'Leary has done a nice job building the UCF program. It will be nice to see Mark Richt run his record to 2-0 vs. O'Leary.

- Improvement on defense. The Dawgs have had another month to work on the 3-4. With only a few seniors on defense, Georgia should only get better next year (especially if they get a big guy to plug in at DT).

- Georgia 38, UCF 24. The Dawgs should win this game. Central Florida may have a 10-3 record, but they lost the two games (NC State and Kansas State) that they played against BCS conference opponents. Of their 10 wins, only 2 (6-6 East Carolina and 7-6 SMU) came against teams that will be playing in bowl games.
Posted by Streit at 9:43 AM 2 comments:

Here's the last video for Christmas. Super benefit group Band Aid with, "Do They Know It's Christmas?"
Posted by BulldawgJosh at 5:30 PM No comments: