Sorry for the lack of posts this week. I'm out of town for the next few days, but i should be back next week with week 3 of the Ultimate Road Trip.
Posted by Streit at 10:53 PM 10 comments:

Slummin' it with Quincy

***UPDATE - Quincy was arrested today. I started writing this article last week and this was completely random. Check out the story here.

Quincy Carter spent three years as the starting quarterback at The University of Georgia from 1998 - 2000. When I heard a couple of weeks ago that he was once again trying to resurrect his career, this time in low level arena league football, I decided to take a closer look at this fallen Bulldog star. Here is a look at the rise and fall of Lavonya Quintelle "Quincy" Carter. 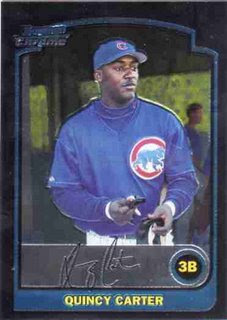 In the fall of 1995, Quincy Carter led his Southwest Dekalb team to the Georgia AAAA State Championship over future Bulldog Brett Millican and the Parkview Panthers. The star QB committed to play football at Georgia Tech however he would never take a snap for the Yellow Jackets. The Chicago Cubs made Carter the 52nd overall pick in the 1996 Amateur Draft and he quickly began his baseball career. After hitting only .215 in 55 games his first season, Carter failed to improve over the next two seasons and found himself out of baseball in 1998, having never hit above .248. 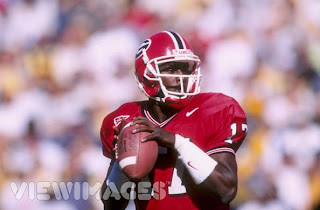 When Quincy Carter decided to restart his football career, he decided to stay away from the school he originally committed to (Georgia Tech) and instead headed to rival Georgia. Quincy would win a highly contested battle for the starting quarterback job (beating out the likes of Nate Hybl who would later start at Oklahoma and Daniel Cobb who would later start at Auburn). Carter enjoyed a successful freshman season under coach Jim Donnan leading the Bulldogs to a 9-3 record and a Peach Bowl victory over Virginia. Carter's signature win was a 28-27 upset of #6 ranked LSU in which Carter passed for 318 yards and two touchdowns. 1999 was another successful season for Carter as the Bulldogs went 8-4 and beat Purdue on New Year's Day in the Outback Bowl. Expectations were high for Carter's junior season, as he was on early Heisman watch lists and the Dawgs were ranked in the top 10. After a win over Georgia Southern, the Dawgs headed to South Carolina to take on a Gamecocks team that had not won a game in 1999. And that was the beginning of the end for Carter at Georgia:


Carter was never the same and ended his career on the bench with an injury. Rumors swirled around Athens that Carter was actually caught with drugs and that is why he was not playing. Coach Jim Donnan was fired and Quincy announced he was leaving for the NFL after his junior season, much to the liking of most in the Bulldog Nation.

Quincy in the NFL: The Trouble with Big D

Just as he was a second round pick in the baseball draft years before, Carter was taken as the 53rd overall pick in the second round of the 2001 NFL Draft by the Dallas Cowboys. Following the retirement of legend Troy Aikman, Carter found himself as the starting quarterback of the most popular team in football. He would have a successful rookie season, however he lost his starting job the following year to Chad Hutchinson. Carter would regain his job just prior to the 2002 playoffs, where he led the Cowboys to a victory over the Cardinals. Under new Coach Bill Parcells, Carter led the Cowboys to a 10-6 record and another playoff appearance in 2003 but that would be his last year as a Cowboy.

Carter was released in the summer of '04 amidst rumors of failed drug tests. Carter denied the charge, but the Cowboys official release stated he was release because of a failed drug test and poor attitude. Carter signed with the Jets and backed up Chad Pennington until once again, drugs became his problem. Carter would go to rehab in December 2004 and was released by the Jets in early 2005. He has not played a down in the NFL since.

Carter signed a contract with the Montreal Alouettes of the CFL in 2006, however only spent a month with the team before being released. He was arrested in the December of 2006 for possession of marijuana, an incident that was famous because a sports talk show host bailed Carter out of prison. Carter landed back on his feet in the minor league for the AFL, A2, signing with the Bossier-Shreveport Battle Wings. He had a successful season, but that all came crashing down when he was arrested for drugs by the Shreveport police on October 12, 2007. 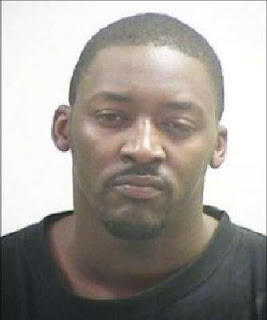 Carter was released from the team and would later try out for the Miami Dolphins in the summer of 2008.


Where is Quincy Carter today?


In March of 2009, Carter signed a contract with the Abilene Ruff Riders of the Indoor Football League. With a salary of $200 per week plus an additional $50 bonus for wins, Carter is a far cry from his days as the quarterback of "America's Team". Carter has started all six games for the Ruff Riders, leading them to a 3-3 record. Carter has thrown for 1221 yards and 28 touchdowns in those games, including 8 against the San Antonio Stampede Express on April 25. Check out some of the footage here.

For Georgia fans, we will never forget the bright times Carter had on the field. The wins over LSU and Virginia are found memories, but most people tend to remember the bad. Carter will mostly be remembered for the 2000 season, including the 5 picks at South Carolina and the horrible game against Florida. Carter's story is on of wasted potential, a gifted athlete who was drafted in the second round of both major sports but never lived up to his potential.
Posted by Streit at 8:32 AM 4 comments:

Labels: Dawgs in the NFL, Quincy Carter, Where Are They Now
Newer Posts Older Posts Home
Subscribe to: Posts (Atom)