Big Game for the Basketball Team

Kentucky comes to Athens to open the SEC basketball season tomorrow. Georgia is 11-2, with its only losses coming to Temple (who was ranked #20 at the time) and Notre Dame (who is currently 13-2 and has climbed to #14 in the rankings). This is chance for Mark Fox's team to make a statement. Georgia played Kentucky close last season, and who can forget this:

They didn't commit to Georgia...

Dickson and Bray decided to take their talents to different schools in the state of Alabama. And the response from the Georgia fans can best be described in this:


It's okay people! Now, if we don't get Crowell, Drew, Rome, Jenkins, or Mitchell...that is a different story.
Posted by Streit at 11:08 AM 6 comments:

From 2005 until 2009, the Georgia Bulldogs have seen 8 players forgo their remaining eligibility and enter the NFL draft. Here is a look at those who left early during the second half of Richt’s first decade in Athens.

Leonard Pope – 3rd Round by Arizona – Pope left Georgia following the SEC Championship season and was drafted by a pass happy Arizona Cardinals team. And while receivers like Anquan Boldin and Larry Fitzgerald put up huge numbers catching passes, Pope never really took off. He has played the last 2 seasons with the Kansas City Chiefs.
Verdict – Bad Decision – Pope’s size was amazing, but one more year in Athens could have really helped hone his skills. He has not lived up to the success that former Georgia tight ends Randy McMichael and Ben Watson had.

Danny Ware – Undrafted – Ware bounced around before finally finding a home with the New York Giants. Ware has become an important special teams player for the Giants and earned a Super Bowl ring in 2008. Now going by DJ, Ware’s career has lasted longer than the backs he was behind at Georgia.
Verdict – Good Decision – With Thomas Brown, Kregg Lumpkin, and Knowshon Moreno on the roster, Ware would have seen very few carries in 2007. He went undrafted, but has made a nice place for himself on the Giants.

Charles Johnson – 3rd Round by Carolina – Johnson has gradually earned more playing time for the Panthers and this year took over for the departed Julius Peppers at defensive end. His career is on an uptick, even if the Panthers are horrible.
Verdict – Good Decision – Johnson was a beast and after watching teammate Quentin Moses struggle after returning for his senior season, Johnson leaving early was a no-brainer.

Asher Allen – 3rd Round by Minnesota – Allen struggled to see the field much during his rookie season for the Vikings, but continued to improve. He earned a starting role this fall, totaling 57 tackles and 2 interceptions.
Verdict – Bad Decision – Allen could have increased his draft status in 2009 by returning to school. He was good, but not great.

Knowshon Moreno – 1st Round (#12 overall) by Denver – Moreno has struggled with injuries for much of his first two seasons, but has managed to put up 1,100+ yards both years. In 2010, he solidified his role as Denver’s starting tailback and has also become a weapon catching passes.
Verdict – Good Decision – He was the first back taken and has had two relatively successful seasons despite injuries. Coming back for an additional year would have done nothing but add wear and tear to his body.

Matthew Stafford – 1st Round (#1 overall) by Detroit – Going to a horrible Lions team, Stafford expected to get hit. He has been hit so much that he has failed to stay healthy, ending both of his first two seasons on IR. He has shown promise in the 13 games he has played in.
Verdict – Good Decision – There is an argument that going to the NFL to get pummeled and constantly being injured was a bad decision. But Stafford most likely would not have been the #1 pick in 2009, meaning he would not have gotten the $40+ million from Detroit. Plus, he would not have done this:

Rennie Curran – 3rd Round by Tennessee – Curran played sparingly during his rookie season, though his play time increased as the season progressed.
Verdict – Good Decision – As Curran stated when he made his decision, he was not going to get any taller by staying another year in Athens. The only way he would earn a starting role in the NFL is by playing his way up the later. Starting as soon as possible was the right move for him.

Reshad Jones – 5th Round by Miami – Jones appeared in 13 of the Dolphins’ 16 games this fall, recording 21 tackles. His best game of the year came when he recorded both his first career sack and interception on November 20 against Tennessee.
Verdict – Bad Decision – Jones had an amazing combination of both size and talent. He improved each year he was at Georgia and one more season could have improved his draft status significantly.


All told, there have been 16 players that have left Georgia early for the Draft during the Richt era. AJ Green’s decision is a no brainer, but hope players like Justin Houston and Brandon Boykin consider the past experiences of these Georgia pl
Posted by Streit at 3:21 PM 4 comments:

In the next few days, AJ Green will make the inevitable decision to forgo his senior season at The University of Georgia for a career in the NFL. While there are a handful of other Georgia players who are also making the same decision this fall, I only think Justin Houston will ultimately join AJ in the draft early. I decided to look back at those players who have left school early during Mark Richt’s tenure as coach in Athens. Not counting Paul Oliver (who originally came back for his senior season before flunking out and entering the supplemental draft), I have come up with a list of those who left early. Here’s a look at those players and whether I think the decision to leave early ended up being the right or the wrong decision (note: I compiled this list by hand. This is part 1, part two will appear on the blog tomorrow) Players are listed by the last year they played at Georgia.
2001
Terreal Bierra – 4th Round by Seattle - Bierra played a backup role for the Seahawks before starting 12 games in 2004. But after Seattle had one of the worst secondaries in the league in ’04, Bierra was controversially cut in 2005 when he left the team to help rescue family members trapped in New Orleans during Hurricane Katrina. Bierra was charged with murder after killing a man in a drug dispute in fall 2009.
Verdict: Good decision – despite the fact that Bierra is now in prison, Georgia was loaded with talent at the safety position in 2002. Sean Jones and Thomas Davis were both excellent and Bierra would have not improved his draft status.
Charles Grant – 1st Round (25th overall) by New Orleans –Grant was a force on the Saints line for most of the decade before leaving the team after the 2009 season. He has 423 tackles and 47 sacks in his career.
Verdict: Good decision – No question about this one. After going in the first round, he earned a six year extension following a successful rookie season.

2002
Chris Clemons – Undrafted – Clemons was not a starter at Georgia, but left after the 2002 season. After missing the 2003 season with injury, he established himself as a solid NFL back up.
Verdict: Bad decision – I remember Clemons as being good, but not that good. He played linebacker and Georgia lost Boss Bailey and Tony Gilbert to graduation after the ’02 season. He definitely could have improved his draft status instead of getting hurt in the NFL.
Musa Smith – 3rd Round by Baltimore – Smith played a backup role with the Ravens before breaking his leg on a horse collar tackle by Roy Williams (for which the horse collar rule was put in place). He recovered but never found a spot as a starting running back in the NFL.
Verdict: Bad Decision – I know running backs have a short life in the NFL, but Smith had failed to meet expectations until 2002. A successful senior season in 2003 could have increased his draft value and maybe helped him earn a starting job. 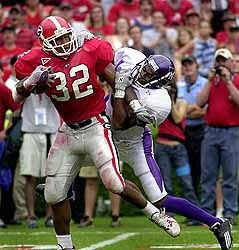 2003
Robert Geathers – 4th Round by Cincinnati – Geathers earned a starting spot in 2005 and has remained a start on the Bengals’ line until today. For his career, he has 176 tackles and 23 sacks.
Verdict: Good decision – Geathers became a starter by his second season and has had a successful career. Returning to Georgia may not have lead him to a team (Cincinnati) that was rebuilding its defensive line.
Sean Jones – 2nd Round by Cleveland – Jones injured his knee and missed all of his rookie season in 2004. He played mostly on special teams in 2005, before becoming a starter in 2006. He had a good career with Cleveland before signing as a free agent with Philadelphia in 2009. In 2010, he signed a two year deal with Tampa Bay.
Verdict: Bad Decision - Jones has had a great career, but the knee injury suffered in his rookie season may not have happened at Georgia (wishful thinking).
2004
Thomas Davis – 1st Round (#14 overall) by Carolina – Davis has developed into a great outside linebacker for the Panthers, but unfortunately has ran into a series of knee injuries that have caused him to miss much of the last few seasons.
Verdict: Good Decision – Davis’ ferocious play at safety in college has translated well to linebacker in the NFL.
Odell Thurman – 2nd Round by Cincinnati – Thurman had a great rookie season for the Bengals, but drug and off the field issues landed him in trouble. After repeated violations, he was suspended by the NFL indefinitely in 2008.
Verdict: Bad decision – A successful rookie season turned out to be his only successful season. Another year under Coach Richt may have proved good for him. 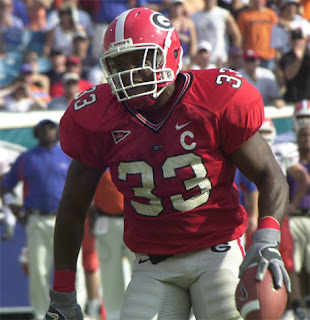 We’ll be back with part 2 tomorrow!
Posted by Streit at 3:43 PM No comments:

2010: The Year Which We Will Not Speak About

What was the best part about New Year's Day? It meant that 2010 was finally over. It was a year for all in the Bulldawg Nation to forget. Too many arrests, suspensions, a crappy season, and a bowl loss. It doesn't get much worse. So, beginning today, there will be no looking back. References 2010 season are inevitable, but there will be no season review, no more analysis of the losses, and questions of what went wrong. Going forward, we will look to the future of the program, that begins with recruiting, continues with spring practice, G-Day, and summer practice, and culminates in the showdown with Boise State at the Georgia Dome.

Bring on 2011, the year wear the dark days end hope returns to the foothills of the Georgia mountains.