The Impact of Stafford Going #1 Overall

After the last few months of speculation, the 2009 NFL draft will commence this Saturday with the Detroit Lions holding the number 1 overall pick. There has been much debate about how the Lions intend to use that pick. Coming off the first 0-16 season, the Lions need help in many areas. Like the Atlanta Falcons taking Matt Ryan with the third overall pick last season to help bring a new face to the franchise, the Detroit Lions are considering drafting Matthew Stafford as the first pick. After watching Stafford play the last three seasons, I have little doubt that he has the tools to become a great pro player and I think the Lions would be making the correct choice if they select Stafford.

What I am unsure of is the impact that Stafford going number one would have on Georgia. While I think I speak for most in the Dawg Nation, we would love to see one of our own go number one, I do question what this message tells future prospects.
Matthew Stafford came to Georgia in 2006 as arguably the highest profile recruit of the Mark Richt era. After throwing a touchdown pass on his first attempt in G-Day that year, the expectations were set high. Georgia struggled through the 2006 season, but both Stafford and the team found their stride by closing with three straight wins over ranked opponents. The 2007 season made Stafford a star, as he helped lead the Dawgs to a number 2 final ranking. And the combination of Stafford and Knowshon Moreno had the entire Georgia fan base excited about a shot at a national title in '08.
As the '08 season played out, Stafford had his best statistical season but the Dawgs dropped games to Alabama and Florida and fell out of the race for the SEC Championship. Despite a great performance from Stafford, the Dawgs lost to Georgia Tech to close the season and I knew that Stafford's career at Georgia was over. He had accomplished what he needed to do to become a top pick (win games on a national stage, display his skills, and improve season to season). For his career at Georgia, Stafford had key wins over LSU, Florida, and Auburn, but he never played for an SEC championship. I can't help but feel that he left with business unfinished.
It scares me that future Bulldog prospects may begin to see the Georgia program as just another stepping stone to the NFL and not as a place to come and win a championship. Having a number one overall pick will be a selling point for Coach Richt and his staff to use to attract the top talent, but will those players come to Georgia to win a championship or just to get to the next level? In some situations, it is a no-brainer that a player will leave early for the draft. There is no better example right now than AJ Green. Barring injury, I see now way that Green is in Athens after the '10 season, but that doesn't mean I hope he leaves early because he will be another top 10 pick for the Georgia program.
I wish Stafford, Knowshon, and Asher the best at the next level but I honestly wish they had returned. I know they will represent us well as high picks in the draft, but if I had it my way, I would take another 7th round draft pick quarterback who leads us to SEC Championships over the #1 pick any day of the week. 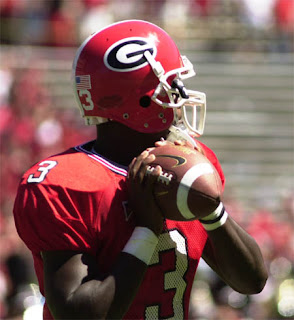 Last time I checked, Joey Harrington got cut instead of this guy.

That's right, even the LA Times says going to Athens is just as important as venturing out to a south Pacific tropical paradise.

We'll go ahead and assume Knowshon had something to do with it.
Posted by BulldawgJosh at 9:36 AM No comments:

We apologize for the long hiatus since our last 80's music video. We will make sure that something like this doesn't happen again. We know how much everyone needs their 80's music videos.

Posted by BulldawgJosh at 7:00 AM No comments:

A Great Weekend in Dawg Sports

It's hard to say the University of Georgia athletic program could have done better in one weekend than it did this past weekend.

Over the weekend, UGA teams accomplished the following:

-Equestrian team won the national championship (2nd in a row)


I personally was able to see the Saturday baseball game against Arkansas and the men's tennis team beat Tennessee. Later, I found out the largest crowd of the season turned out for the tennis match. It doesn't get much better than that for a Saturday afternoon.

I want to give a shout out to my friends Keith and Annaka for inviting me to their friends tailgate that was hosted by Tom Stovall and had some great chefs, Gant and Chris. The food they cooked for it was unbelieveably good, came in monstrous amount, and rivaled any tailgate at a football game.

It's great to be a Georgia Bulldawg!
Posted by BulldawgJosh at 1:15 AM 2 comments:

There is a great article by Cory McCartney over at Sports Illustrated that sums up where Georgia is following spring practice.

Check it out here.
Posted by Streit at 10:09 AM No comments:

We are now one week removed from G-Day and 3 months away from summer practice. The best we can hope for over those next three months is to hear very little out of Athens. Last year, most of the news was concerning player arrests or great expectations. This year, I will welcome a little silence as we prepare for the 2009 season.

Here is a glimpse of some other stories that are taking place in the Georgia athletic world right now:

- The Georgia gymnastics team won its fifth consecutive national championship. I repeat, 5 NATIONAL CHAMPIONSHIPS in a row. Can you imagine the excitement level of the Dawg nation if the football team won 1 NC, let alone 5?

- The Diamond Dawgs took 2 of 3 from Arkansas to remain atop the SEC standings. At 2-2 for the week, I expect the team to fall out of the #1 ranking in the Coaches' Poll.

- The NFL draft is this Saturday and it looks like Stafford will indeed go #1 to the Lions. The real steal of the draft will be whoever picks up Knowshon in the 20-30 range.

- Speaking of Knowshon and Stafford, both are candidates to appear on the cover of this year's version of EA Sports NCAA Football. They begin announcing the cover athletes today on ESPN College Football Live and will do a different system's version of the game each day. I expect Stafford to grace the cover of either the XBOX360 of PS3 version.
Posted by Streit at 9:01 AM 2 comments: