As we await the Dags showdown with Texas A&M in the Independence Bowl, I thought it would be fun to take a look back at the best plays of the 2009 season. While this season may have been a disappointment overall, it was not without its share of great moments. In part 1, we will look at plays 10-6:
#10 - Branden Smith 61 Yard Revers Touchdown against South Carolina
As a true freshman in 2009, Branden Smith saw ample time at the corner back position providing relief for Prince Miller and Brandon Boykin. However, Smith's most memorable moments came on offense when Smith was able to show off the amazing speed that made him the "Fastest Man in Georgia" during his senior year of high school. Smith's first amazing play came on a reverse against South Carolina:
Smith had another long touchdown run later in the season when he took a snap from the wildcat 52 yards for a touchdown against Tennessee Tech.
#9 - Joe Cox Throws 5 Touchdowns at Arkansas
When Georgia met Arkansas in late September, Razorbacks quarterback Ryan Mallett put on an amazing passing display throwing for over 400 yards. And while many across the country expected Mallet to have the ability to put up these numbers, few though Joe Cox would be able to match him. But Cox was up to the challenge that night. 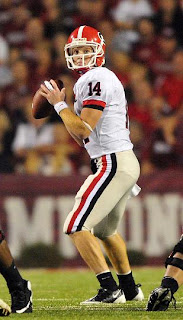 Cox would end up 18 of 26 for 375 yards and 5 touchdowns on the night. Cox found AJ Green (twice), Orson Charles, Tavarres King, and Aron White for scores in the 52-41 victory. Cox was named national player of the week for his effort.

With Georgia already down 14-0 and AJ Green leaving the field with a shoulder injury, little used receiver Israel Troupe came in to the game. Mike Bobo, not realizing Green had left the game, called a long pass play. Caleb King threw a huge block which allowed Troupe to get separation down the sideline. Joe Cox hit troupe in stride for the 50 yard TD which sparked the Georgia comeback.

Without a two injuries that essentially cost him 4 games, AJ Green would have easily walked away with the Bilitnekoff award for the best receiver in the country. Early in the victory at Vanderbilt, Green took a quick out pass from Joe Cox. He then showed why he has become one of the best receivers in the nation:

#6 - A Pair of 100 Yard Touchdown Runs for Brandon Boykin

Sophomore corner Brandon Boykin made a name for himself as one of the most electrifying returners in all of college football with a pair of 100 yard kickoff return touchdowns. The first came against South Carolina:

Boykin then matched the feat a few weeks later, providing one of the few Georgia highlights in the loss at Tennessee:

Posted by Streit at 1:18 PM No comments:

All Quiet on Home Front

With the Dawgs awaiting their bowl date with Texas A&M and Coach Richt keeping mum about who will be the next DC, things are pretty quiet for the Dawg nation right now. Some have speculated that the lack of an announcement regarding the defensive coordinator position means that Georgia may already have their man lined up.
Many Georgia fans hope the role ultimately goes to Kirby Smart. If he ends up being the man for the job, there will definitely not be an announcement prior to the BCS Championship. Kirby Smart is currently a hot name in the coaching world, not simply because of his on field success, but because of the number of teams currently looking for defensive coordinators. In addition to Georgia, Florida is also looking for the right man to replace Charlie Strong and Brian Kelly is looking to fill his staff at Notre Dame. The only downfall of bringing in Smart is that we may be back hunting for another defensive coordinator in a few years. While you would love to bring in a coach who could be with Georgia for years, you can’t pass up bringing in the best available candidate for the job. 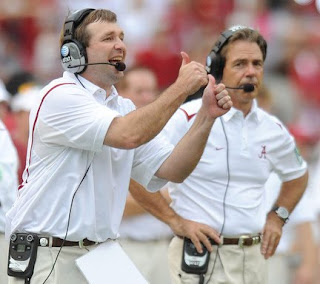 Do I honestly think Smart will end up the man in Athens? No. I imagine a huge raise from Alabama will keep him in Tuscaloosa. Only time will tell who the new coach will, but whoever it is, I am sure Coach Richt will make the best choice for the program. 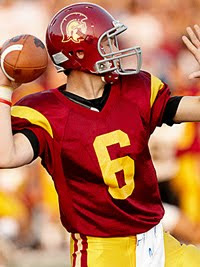 The recruiting season is in full swing, but the biggest news concerning the Dawgs right now revolves around the quarterback position. Lassiter QB Hutson Mason will announce his decision on Monday and I fully expect him to accept the scholarship from Georgia. I have read a number of places that he was waiting on the offer and I will be very happy to keep the record setting QB in the state. The other quarterback news involves Wilcox County junior Nick Marshall. I saw this kid play in the Class A state championship game on Saturday and I was impressed. Besides being a good QB, the kid is rated as one of the top junior basketball players in the country. My brother-in-law’s father is friends with the athletic director at Wilcox County and when Marshall was asked about potentially handing the ball off to Washaun Ealey, he said he would rather not hand the ball off to a guy who beat him in the State Playoffs last year. In the end, he will most likely end up playing basketball at a major program, but I am glad we are continuing to go after the best this state has to offer.
Posted by Streit at 7:45 PM 2 comments:

I can't believe it, but this week marks the beginning of the 2009-2010 college football bowl season. While still finishing up the post for our season winner of the Bubba 'N Earl Pick Em Challenge, we are announcing the Bubba N' Earl 2009-2010 College Bowl Challenge. Use the following link to access the Bubba N' Earl group:

This year, I am personally challenging all of our readers. For the reader who beats me and scores the most points, I will give them an opportunity to write a guest post here on the blog and brag about their victory.

Get those picks in and let the games begin!
Posted by Streit at 8:53 PM No comments: