What if we win?

After a 6-7 season that ended with a bowl loss to Central Florida of all teams, many Georgia fans have little to no expectations for the 2011 season. Opening against a top ten team in Boise State appears to be a challenge that this year's team may not conquer. Throw in a week 2 battle with another top 10 team in South Carolina, and it appears many believe Georgia is headed to an 0-2 start.

But what happens if we win???

A win over Boise would be huge for the confidence of the team, but not so much for the fans. As an SEC school, you are expected to win big games and given Boise State's current status as a non-qualifier, they are still a team that an SEC school should beat. But that win in week 1 may be the boost that the Dawgs need to be successful in the home opener on September 10. While the Dawgs may have given up a lot of running yards to Marcus Lattimore last fall, they were in the game until the 4th quarter and if not for a Washaun Ealey fumble, may have had a chance to win the game. We played that game without AJ Green as well.

Georgia wins in the first two weeks of the season may not mean a championship (of any type) but it sure as heck could be the start of a special season in Athens. The schedule gets easier, as the only team with a winning record (not including Coastal Carolina) the Dawgs will see in the 5 games is Mississippi State, who has to come to Athens. After that, the Dawgs head to Jacksonville to play Florida before 3 more home games against New Mexico State, Auburn, and Kentucky.

If the Dawgs somehow win the first two weeks, I would not be surprised to see the record at 10-1 or 9-2 by the time we head back to Atlanta to play Georgia Tech. To say these first two games are critical is an understatement.

Only 11 more days til kickoff.

Weighing in on the Uniforms


Alright, now that everyone had has gotten their anger and frustration out, here are my honest opinions on the Nike Pro Combat uniforms the Dawgs will wear in the Dome.

- I don't mind the red jersey and red pants. One of the most famous clips in Georgia history features red pants and at least we got to keep our red jerseys. I am just glad it is not black on black, cause that would have been awful.


- The silver helmet doesn't look too bad...except for that stupid red stripe. If it was just a thin red stripe like the white one on our regular helmets, it would have been great.

- These are definitely not as bad as they could have been. I still think the black pants and helmets from two years ago are worse.

- We only have to wear them for one game, so we can have a burning party after the Boise game to get rid of them.

- I am very glad that the helmet features our regular G logo instead of something like a Bulldog with his hat backwards like this: 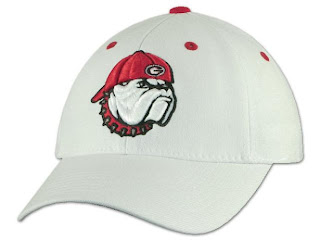 - The players like them, but this is definitely not a motivational ploy. Nike required us to do this. The people complaining about Richt doing this for fake juice need to shut up.


While that may not be perfect, they could have been a lot worse. In two weeks, the uniforms will just be a memory.