Two months ago, we sat in Sanford Stadium as the clock reached :00 and watched the Dawgs fall to 0-2 on the season. After the deflating loss in the Dome to Boise State, the Dawgs had looked determine to turn things around, but too many mistakes led to another home loss. The media and fans were all over Coach Richt, and even I began to think this may be Coach Richt's final season in Athens. But then a funny thing happened - we woke up.

Call it easy schedule, call it luck, call it whatever you want. But the fact of the matter is that Georgia's magic number (to borrow a term from baseball) to clinch the SEC East is 2. The combination of Georgia victories tomorrow and next week or a victory in one of those games coupled with a South Carolina loss to Florida means the Dawgs head back to Atlanta for the SEC Championship for the first time since 2005. You may say you knew this would happen, but I wouldn't believe you.

The game on Saturday presents a interesting matchup for a Georgia team that has really found its groove the last few weeks. Since allowing 35 and 45 points in the first two games, Georgia has allowed more than 20 points only once. The defenses is in the top 10 in the country and has been especially strong against the run. Auburn will rely heavily on HB Michael Dyer and if Georgia shuts Dyer down, I can see a double digit win for the Dawgs. This game really comes down to a good Auburn offense against a strong Georgia defense. The winner of that battle wins the game.

While some people still think Aaron Murray is struggling, the sophomore quarterback is putting together what could be a record setting season. He leads the SEC in passing efficiency and has found a way to make some big plays despite not having his best stuff(see the Florida game). Having Crowell suspended last week may be a blessing in disguise. Hopefully the two bye weeks he had this month allowed that wrist to heal and hopeful he is ready to carry the ball more than 20 times.

Do I think this game will be one sided, as the 13.5 point spread suggests? Hell no. Have you watched the Georgia - Auburn games over the last 10 years? But, do I think this is a game where one team has a talent and experience advantage over the other? Yes. Auburn won a national championship last fall, but almost everyone of the critical pieces from that team moved on. This is a different Auburn team, one that almost lost to Utah State to open the season. Much like Georgia, their losses are all to highly ranked teams. But unlike Georgia, they now start a freshman quarterback who is starting for only the third time in his career.

Georgia should lead most of the game, but the Tigers will keep it close. The fourth quarter may see Georgia build a lead to around ten and then proceed to run clock like they did against Mississippi State. 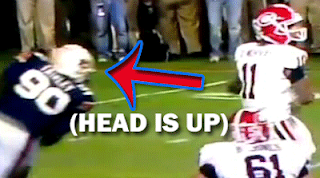 Fairley and Scam may be gone and Auburn is just a middle of the road school, but never forget the cheap shots and lack of class they showed last fall. Auburn deserves no respect from me, at least this year. I watched the Iron Bowl documentary from ESPN last night, and I wanted to punch Fairley and Scam in the face. Auburn will keep their National Championship, but they didn't do it the right way. I am no Alabama fan, but watching them win the 2009 Championship was much more fun to watch than Auburn last year.

After this season, it may go back to a friendly rivalry with the boys from the Plains. But for this year, it's pay back time.

DSOR: Flashback,1986 'Between the Hoses'

We all know the big implications of the looming game versus Auburn: Take care of business, and it'll be the first time since 1981 that we will have beaten UT, UF and AU all in one season (plus one more step toward an SEC Championship berth, our first since the Shockley-led Championship team of 2005). And that's not even mentioning the opportunity to get back to a 1-game difference in the Deep South's Oldest Rivalry.
In an attempt to ignore some of the revenge-buzz that will likely percolate after last year's blatant lack of sportsmanship, here's a quick flashback to an earlier Bulldawg generation's controversy, the 1986 "Between the Hoses" game at Jordan-Hare.

The Red & Black front page on November 18,1986.
(H/t: R&B and the University of Georgia Library)
As the R&B article notes, Auburn itself, in an official statement, acknowledged turning the "spray into the stands on the north end of the field," with 400 UGA fans on the field and more trying to partake in the celebration.
The article notes 2 Redcoat Band members were injured by a thrown beer bottle and interviews a flag corps member who received stitches and a drill team member also cut by flying glass; it does not have further details on the extent of any other injuries suffered during the melee. 38 people were ultimately arrested.
The scary footnote to the article, though, happens to be that UGA at that time also had a similar policy for crowd control (quoting then-AA administrative assistant Greg McGarity). I can't imagine a modern Athletic Association ever executing such a policy again, even if it was still on the books, with the swift and immediate repercussions the school would deal with. Can you imagine ESPN's coverage in the 21st century over something like that?
The game itself carried such a strong reaction with the unranked 6-3 Bulldogs facing the No.8-ranked Tigers, 8-1 on the season, on the Plains. With starting QB James Jackson out with an ankle injury while also dealing with his grandmother’s death, backup Wayne Johnson got his first start of the season and led the Dogs to a major upset, 20-16.
Wayne Johnson came into the game 1 for 4 on the season with an INT, yet was able to manage the Dawgs down the field in the 2nd quarter to tie it up, with a TD pass to Troy Sadowski on a quick play action rollout. Johnson ultimately had little to show for it in the box score, going 6-7 with only 59 yards passing; the UGA running game saved the day, running all over the top-ranked defense in the SEC for 236 yards. The Dawg defense had a decent day, with LBs Steve Boswell and John Brantley sharing the AP's Southeastern Defensive Player of the Week award.
A late 4th quarter INT by Boswell ultimately iced the game for the Dawgs, 20-16, and then the chaos ensued.
---------------
The 1986 game, with a mediocre UGA team winning over the then-#8 War Eagles, is pretty symptomatic of the Rivalry's swings; the team in a relative down year can and has knocked the stronger team off its pedestal (for a more modern example, look to the 2006 game and Tra Battle's 3 INTs on the rain-soaked Plains against the No. 5 Tigers).
Sporadic highlights from the 1986 game (sadly no 'hoses' footage).
Posted by Gov Milledge at 5:00 AM 4 comments: