(Note: This is the first entry in a series that will look at the career of Georgia players either graduating or moving on this year) 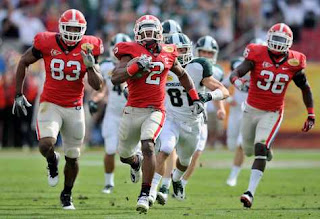 Recruitment:
Boykin was a #14 rated cornerback in the country and a 4 star recruit out of Fayette County High School in Fayetteville, GA. Boykin, who also played quarterback, committed to the Dawgs on December 7, 2007 and was amongst a star studded class of 2008 that included AJ Green and Richard Samuel.

Career Highlights:
I don't love the music, but here is a great collection of Boykin's career highlights someone put up online.


Best Game - 2012 Outback Bowl
The Dawgs may have come up short in triple overtime to the Michigan State Spartans, but Boykin did everything he could to make sure that didn't happen. Showing his true versatility, Boykin scored in all three phases of the game. He started the scoring by recording a safety in the first quarter, returned a punt 92 yards for touchdown in the second, and catching a touchdown pass in the fourth. He was named the bowl game MVP despite the Georgia loss.

Here's what I learned this year: