1. Ray Drew moving back to DE is a great decision. It's Garrison Smith's job for now, buck look out for the Pastor of Disaster.

2. Adding JUCOs in the secondary is a good idea, but if Chris Sanders does get his stuff together, I'd rather bring him back.

3. Every recruit is going to Alabama. Just accept it. They offer everyone, they get tons of commits, and people still keep picking them.

4. I would love to see Orson Charles continue to wear red and black this fall. If he is available to the Falcons in the 2nd, they should take him no doubt. Tony Gonzalez is awesome, but he is done after this year.

5. Well, the NCAA has officially taken the fun out of kickoffs. Touchback city, here we come. This also officially eliminates the possibility of another DB or WR from ever winning the Heisman since the only way they could in the past was if they also returned kicks.

6. The Georgia basketball team is horrible. You don't lose to LSU, Auburn, and South Carolina in the same season. That's like losing to Vandy, Kentucky, and Miss. State in football.

7. The QB competitions are always fun to watch, but the Crowell vs. Marshall battle could be one of the best position battles ever. Two #1 overall backs in the country competing for a starting position as underclassmen. That's insane.

8. Get the contract extensions done!

9. When are we going to offer Mario Alford? We need depth for this fall.

In Theory It Looks Like a Great Idea, But...

With Sanders Commings suspended for two games and Nick Marshall and Chris Sanders now playing JUCO football, depth in the secondary has suddenly become an issue for Georgia. One idea that has been floated around and now commented on by Coach Richt is letting rising sophomore Malcolm Mitchell spend time at corner. And while this sounds like an idea that may work (I have no doubt Mitchell could be a very good CB in the SEC), I would rather not see our rising star at receiver playing both ways. Here are the reasons why.

#1 - His greatest potential is at the receiver position. Malcolm had a fantastic freshman season, catching 45 passes for 665 yards and four touchdowns. And he did it while missing three full games to injury. While those numbers are not quite AJ Green level, they are comparable to Mohammed Massaquoi (38 for 505, 2), Fred Gibson (33 for 772, 6) and Terrence Edwards (53 for 772). Mitchell has the potential to be one of the best receivers in Georgia history, why divert his attention?

#2 - Speaking of those three games he missed, is it worth it to risk an injury. He got hurt running a simple deep route and it took a month to recover. AJ Green ended up missing a lot of time due to injury and I don't want that to happen to Malcolm.

#3 - Playing Mitchell at corner this year will not help us prepare for 2013. The entire second will graduate after this year. We need to get some experience in those young players like Bowman, Swann, and Dawson. Let them fill in Commings role against Buffalo and Missouri. In case anyone else gets hurt, at least these guys will have some real experience.

#4 - We may need him to return kicks. This is the one place where missing out on Patterson really hurt. While Branden Smith will get first crack, I am still concerned about his tendency to fumble.

#5 - He's not Champ Bailey. Malcolm Mitchell is a phenomenal player, but to put any kind of expectation that he could perform like Bailey is asinine.
Posted by Streit at 12:40 PM 2 comments: 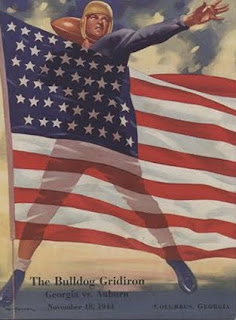 The Deep South's Oldest Rivalry: as all-American as apple pie.
(UGA-Auburn Program, 1944).
Today, February 20th, is the 120th anniversary of the first game in the Deep South's Oldest Rivalry, UGA's second game in program history. The game, played in Piedmont Park in Atlanta, was the capstone to the 1892 Georgia football season, a season which was the first year of organized football being played south of Raleigh, NC.
Auburn fans uniquely identify with the first game in the Rivalry as being the origin of "War Eagle," with an eagle purportedly brought home by a wounded Civil War veteran from the Battle of the Wilderness rallying the crowd and students from Auburn to a 10-0 victory over Georgia, where at the end of the game the eagle crashed and died on the field.
The game has also served as a rallying cry for Georgians. The inaugural game attracted 150 students from the nearby Georgia School of Technology to dress up in red and black and cheer for Georgia, and the second game, a 10-8 Georgia victory in November 1894, caused quite the celebration once the team & fans arrived back in Athens:

"The Varsity special left at 7 o'clock and the people of Athens awaited the arrival of the party at the Athens depot with a brass band and plenty of enthusiasm. Merchants opened their stores and told the boys to help themselves to boxes. Soon a large bonfire lighted up the campus, the college rang out on the night air and the college yell was heard on every hand. The night had far spent itself when the last echo of the bell was heard and the dying embers of the great bonfire was all that was left to remind the passer by that the great day was over. Georgia had triumphed!

Three years had she waited and now the defeat that had once befallen her by the hands of the Alabamians was blotted out." (The Red & Black, December 1, 1894).

Since 1898, the series has only been halted for 3 years, 1917-18 (when we were 'Over There' for WWI) and 1943 (WWII). The Georgia-Auburn rivalry is considered the oldest rivalry in the South, with UGA-Auburn's first game preceding the South's "Oldest" Rivalry (UVA-UNC) by 8 months. While UVA and NC have played 116 times through 2011 (to 115 for UGA-AU), the UVA-UNC series was notably not halted during World War 2.
Ours is a rivalry that is extraordinarily even, with Auburn holding the series lead 54-53-8 thru 115 games, yet Georgia leading by 76 points scored in the overall series, 1854-1778.
Yet all this history may be on the chopping block, along with Alabama's rivalry with Tennessee, for the sake of the greater good of the conference. Once you go down this path for the sake of Missouri, TA&M, and a more 'balanced' 8 game conference schedule, you destroy the fabric of a storied rivalry, trample upon a game that predates the Southeastern Conference itself by 40 years, and kill one of the biggest traditions in both program's storied histories.
On this, the 120th anniversary of the Deep South's Oldest Rivalry, take a moment to call, fax, or write a letter to Mike Slive and let him know of the importance of the Georgia-Auburn annual rivalry in the SEC and the need to keep fixed annual cross-division rivals. While Commissioner Slive may not have an ounce of Southern blood in him, common sense at some point may kick in to prevent the SEC's own 'New Coke' fiasco.
ESPN-produced Intro to the 2004 Game.
Posted by Gov Milledge at 5:00 AM 2 comments: