So You Hate Richt, but Love Stacy Searels?

I'm amazed by the talk from people who hate Richt and/or want him fired because of our school's performance in recent seasons, yet are lamenting the loss of "elite coach" Stacy Searels.
Really?
Searels has been the most underachieving coach in Richt's tenure. Seems like complete hypocrisy to want the head coach fired, yet be upset over the loss of the weakest link because of some perceived greatness (and obviously ignoring his unit's performance 3 of his 4 years here).
If you somehow think Searels is a great coach and it's a loss for the program, I may not agree with you, but I can accept you feel that way. However, if you hold that opinion and think Richt should have already been sent packing, then there's a logical fallacy with your line of thinking.
Posted by BulldawgJosh at 11:49 AM 5 comments:

Jay Rome and Malcolm Mitchell are my homeboys

For once, Georgia had a good day yesterday. The news that Stacy Searels officially accepted the O-line position at Texas became an afterthought as the Bulldogs picked up 2 commitments from Valdosta.

The commitment of tight end Jay Rome was pretty much a forgone conclusion. There have been rumors that Rome has been recruiting other players to Georgia during the fall. After making his commitment on ESPNU yesterday, Rome put out an open invitation to Isaiah Crowell and Ray Drew to come be a part of the Dream Team. Later in the night, Rome showed up at the announcement for Malcolm Mitchell sporting a t-shirt that said "UGA is my homeboy!" Here is an interview with Rome about his decision.

Later in the evening, Malcolm "Tampa" Mitchell also recruited to the Dawgs. I thought for sure he was going to Bama, so this is a big get for the Dawgs. I think we may see him on both sides of the ball (like Branden Smith). Here is an interview with Mitchell.

Overall, a great recruiting day for the Dawgs. If the Dawgs can close the deal in the next few weeks on Ray Drew, John Jenkins, and Isaiah Crowell, it will truly have a "Dream Team" coming to Athens.
Posted by Streit at 9:13 AM No comments:

ARE YOU KIDDING ME???

Vance Cuff, who was repeatedly burned at the corner position last season received an invite to the combine but kris Durham and Darryl Gamble did not. What are these guys thinking? Gamble may not be the best player in the world, but he is much more serviceable than Vance Cuff.

And Durham failing to get an invite is total BS. After missing the entire 2009 season with a broken collar bone, Durham returned to Georgia in 2010 and finished second on the team with 659 yards receiving. While he may not have the statistics of other receivers in the draft, his ability to make big catches combined with his 6'5'' frame means someone will most likely take a chance on him at the pro level. Plus, the "slow white guy" doesn't apply to Durham. Just ask the Georgia Tech secondary. Here's a look at Durham's highlights from this season:

I wish Vance Cuff luck at the Combine, but Gamble or Durham is much more deserving of that spot.
Posted by Streit at 11:05 AM 3 comments:

It's time to bring Champ home

I was listening to the radio yesterday and the conversation was all about the Falcons melt down against the Packers on Saturday. Clearly, the Falcons defense under Brian Van Gorder had a horrible game. however, if you look at the Falcons defense of 2010 and compare it to the 2009 team, clearly the team has made strides in the right direction. The apparent weaknesses of the defense appear to be in the pass rush and coverage.


With starting nickel Brian Williams out with injury, Christopher Owens stepped into the formation that was on the field much of the game to counter the Packers 3 and 4 wide sets. Aaron Rodgers picked on Owens all night long. It is apparent that Owens is not the future for the Falcons. Brent Grimes had a nice season as a starter opposite Dunta Robinson, but clearly his size is an issue. The perfect solution for the Falcons would be to move Grimes to the nickel and bring in an experienced player to start at corner. There just so happens to be a former Georgia Bulldogs player and multiple time all-pro team member who is a free agent. That man is Champ Bailey. 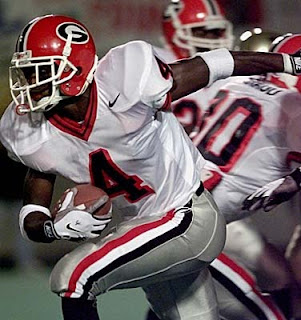 While Champ clearly falls into the veteran category, at 32 his still has a few good years left in the tank. The 1998 Nagurski winner has enjoyed years of success in both Washington and Denver. His 48 career interceptions and 9 Pro Bowl appearances would immediately draw respect from other teams, who clearly game planned to stay away from Robinson this fall. It would be great to see Champ back in his home state wearing red and black. Plus, because he is reaching the end of his career, he won't likely command the type of money that players like Nnamdi Asomugha will.

We Don't Just Give Out Scholarships

There has been a small controversy this week about the scholarship offer that Georgia recently gave to Quintavious Harrow. Harrow, listed at 5'10 and 180 pounds, played linebacker and safety at Carver Columbus. As we all know, Carver was also the home of mega-recruit Isaiah Crowell, one of the top running backs in the country who appears will pick between Georgia, Auburn, and Alabama on national signing day. Some in the media at labeling the offer to Harrow as a recruiting ploy to get Crowell. And while offering a close friend of another recruit never hurts a team's chances with a recruit, to say this is just a ploy to get Crowell is absurd. Here is why:

#1 - This is Georgia, not Alabama. We do not oversign our recruiting classes and unless a player makes a mistake (see Dexter Moody in 2009) we do not rescind scholarship offers. We don't just offer scholarships for the sake of offering.

#2 - The Ogletree boys. Last year, people claimed Georgia only offered Alexander Ogletree a scholarship to secure his talented brother. Alexander became a key special teams contributer in his freshman season and has the lead to be Georgia's starting fullback next fall.

#3 - We're not the only ones recruiting him. Harrow has shown interest from a number of schools, including Clemson and Alabama.

#4 - He just recently became eligible. Academics have been an issue, but he recently improved his scores enough to meet the requirements to play division 1. Georgia only offered a scholarship after he was eligible.

#5 - We have been recruiting him for a while, but we did not have the extra scholarship to offer. From the comments I have seen, the Georgia coaches have been talking to Harrow for a while. It just so happens the scholarship offer came last week, after AJ Green had announced his decision to go to the NFL (and thus opening another spot).

Throw in the fact that Harrow sports an impressive 40 time and we just lost another linebacker (Justin Houston) to the NFL and it is pretty clear this kid will be expected to contribute should he come to Athens. I'm not blind to think that the fact that he is Crowell's teammate played somewhat into the offer decision, but whether Crowell comes or not, Harrow is not just a throw away player.
Posted by Streit at 12:19 PM No comments:

- Has there ever been a more star-studded underclassmen group that this year's group of players from the SEC? AJ Green, Mark Ingram, Cam Newton, Nick Fairley, Julio Jones, Patrick Peterson, and Justin Houston will almost all certainly be first round picks. And there are more big names (Hill, Cobb, etc.) in the class as well.

- Saturday's win over Ole Miss by the men's basketball team may have been the best offensive game I have ever seen by the Georgia Bulldogs. Considering that Ole Miss shot the ball pretty well (47%), the 22 point victory is that much more impressive.

- Trey Thompkins is destined to win the SEC Player of the Year Award. He dominates the floor and has become deadly on short range shots. He reminds me a lot of Al Horford. Travis Leslie continues to get better and continues to add to his ever growing highlight film.

- This is a big recruiting week for the Dawgs. With only two weeks until National Signing Day, the Dawgs need to finish this class strong. On Friday, two of Georgia's key targets (Jay Rome and Malcom Mitchell) will announce their choice. I have a feeling they will be heading to Athens.

- The Atlanta Falcons got smoked by the Green Bay Packers on Saturday. It seemed to be a somewhat fitting ended to a horrible year for football in the state of Georgia. And despite the Falcons inability to win a playoff game, they still managed to have more wins this year (13) than Georgia and Georgia Tech combined (12). Pretty sad.
Posted by Streit at 8:31 AM No comments: