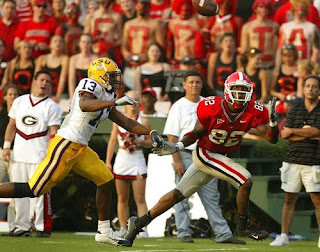 In the spring of 2001, I was freshman at Georgia living in O-House. My roommate was from Waycross, Georgia, and one afternoon we had a message on our answering machine. It was a friend of my roommate named Fred, who had decided switch his college commitment from Florida to Georgia. At that point I had no idea who Fred was, but anyone who decided to shun the Gators in favor of the Dawgs was a good guy in my book. That player turned out to be Fred Gibson, who had a great four year career at Georgia.
Fred Gibson was a member of Mark Richt’s first recruiting class and had originally committed to play for Steve Spurrier at Florida. He was a two sport star at Ware County High School, where he caught 50 passes for over 1,000 yards as a senior. Gibson saw the field early during his freshman season, but had his breakout game in October of 2001 against the Kentucky Wildcats. Georgia had fallen behind Kentucky early in the game, but a couple of long touchdown catches by Gibson would help the Bulldogs rally to victory. In the game, Gibson caught 9 passes for a Georgia record 201 yards, including touchdown catches of 68 and 56 yards. For the season, he caught 33 passes for 772 yards and six touchdowns. This included a Georgia record 5 games of 100 plus yards receiving.
Gibson got off to a fast start in the 2002 season opener against Clemson, returning a kickoff 91 yards for a touchdown in the 31 – 28 Georgia victory. Gibson would have another solid season both catching passes and returning kicks. He totaled 43 receptions for 758 yards and 4 touchdowns receiving and added 460 yards returning kickoffs (despite missing a few games due to injury). In 2003, Gibson would be hampered by injuries and would finish with his worst statistical season at Georgia (36 catches for 553 yards (15.4 average) and three scores). Despite the disappointment, he did combine with David Greene on one of the best play action plays I have ever seen:
Fred returned for a strong senior year that would see him earn All-SEC honors. He caught 49 passes for 801 yards and seven touchdowns. He finished his career third all-time in receptions at Georgia with 161 catches for 2,884 yards. He is currently second all-time in receiving touchdowns with 20. He was drafted by the Pittsburgh Steelers and bounced around the NFL before finally giving up his football career. He eventually would land in the NBA Development League, picking back up the basketball career he gave up following his sophomore year at Georgia. (On a side note, watching Fred hit 6 straight free-throws down the stretch to beat the Gators in Gainesville is still one of my favorite memories of Georgia basketball.)
Posted by Streit at 9:54 AM No comments: 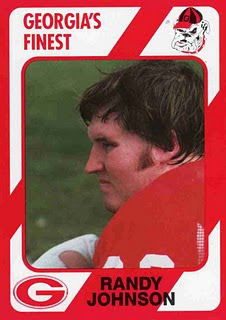 Rome native Randy Johnson was a member of the Georgia Bulldogs during the early 1970’s. Earning a starting position at guard during his sophomore season, Johnson would remain as a three year starter for head coach Vince Dooley. During the 1974 season, the Georgia offense improved its points per game average by nearly ten points (18.6 in ’73 and 28.8 in ’74) and Johnson was named a first team All-SEC member.
During his senior season in 1974, Johnson helped create holes for running back Glynn Harrison as the Bulldogs finished with a 9-2 record and a birth in the Cotton Bowl. After being named the permanent offensive captain for the season, the post season awards began to come in. Once again, Johnson was named to the All-SEC squad, but this year he also added consensus All-American to his resume. He drafted in the 1976 NFL draft and spent 3 seasons in the league with the Seattle Seahawks and the Tampa Bay Buccaneers.
Posted by Streit at 8:25 AM 2 comments: 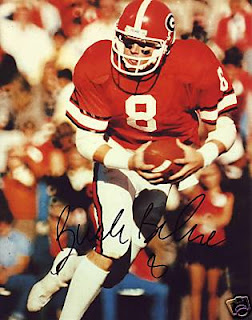 Valdosta High School likes to call itself the winningest high school football program in the country. One of its very own helped lead Vince Dooley and the Georgia Bulldogs to their first national championship since the 1940’s. Buck Belue came to Georgia as a highly talented football and baseball star. And while he was an All-SEC performer on the baseball field, it was his actions on the football field that will hold a special place in the hearts of Georgia fans. In 1978, Buck made his first mark on the Georgia history books during the regular season finale against Georgia Tech. With Georgia down 20-0, Coach Vince Dooley inserted the freshman into the game in second half. With Georgia still down 28-21 late in the game, Belue was able to connect with Amp Arnold on a 42 yard touchdown pass and Georgia won, 29-28.

Belue took over the starting quarterback position during the 1979 season. The Bulldogs finished a disappointing 6-5 that year, but things were about to change in Athens. While Freshman Herschel Walker began lighting up defenses with spectacular runs, Belue kept the Georgia offense in balance. During the week 7 victory over Kentucky, Belue had the best game of his collegiate career. He passed for 228 yards, including a 91 yard touchdown to Amp Arnold and added a score on the ground. Just two weeks later, Belue would be part of the most memorable play in Georgia history. His 93 yard touchdown pass to Lindsay Scott helped Georgia defeat Florida and kept the undefeated season alive. In the Sugar Bowl against Notre Dame, Belue completed only one pass, but the running of Walker and the Georgia D lead the Dawgs to the National Championship.

Beleu was named to the All-SEC team following the season and returned in 1981 for his senior season. Georgia would once again capture the SEC crown (their second of three in a row). Buck would once again earn all-SEC honors, completing 60% of his passes for 1603 yards and 12 touchdowns and was named the offensive team captain. During his three years as starter, Georgia compiled a 27-3 record. He is 8th all-time in passing yards with 3,846 and threw for 32 scores. Following his career at Georgia, Belue was drafted by the Montreal Expos. He now can be heard daily on Atlanta sports talk radio and covers Georgia for CSS.
Posted by Streit at 9:18 AM No comments:

Sadowski was also sure handed as a pass catcher. Despite not having many passes thrown to him, he accumulated 42 catches for 493 yards and 4 touchdowns during his Bulldog career. He was the anchor of a senior class that went to 4 straight bowl games, including a victory in the Gator Bowl in Vince Dooley’s last Game. He was named to the Walter Camp All-American team following his senior season. 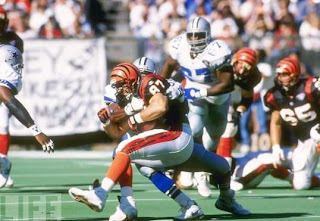 Sadowski was drafted by the Atlanta Falcons in the 6th round of the 1989 NFL Draft. He played for 9 seasons with 6 different teams (Atlanta, Kansas City, Cincinnati, New York Jets, Jacksonville, and Pittsburgh) before retiring after the 1998 season. He finished his career with 23 receptions for 152 yards.
Posted by Streit at 8:32 AM 2 comments:

95: George Collins, Offensive Guard #66 (1974 – 1977)
From Warner Robbins, George Collins was a key member of the strong Georgia lines that helped win the SEC Championship during the 1976 season. Everyone knew about Mike “Moonpie” Wilson, but Collins played an integral role in opening holes for Kevin McLee. Georgia would finish with a 10-2 overall record, and Collins’ contributions on the line would help Georgia rack up nearly 280 yards per game on the ground. When he returned for his senior season in 1977, Collins was a top many pre-season All-SEC lists.

Here is a play from the 1975 squad that Collins was a member of:

George Collins continued to have success in 1977, earning the declaration of All-American by the Sprting News. He played in both the Senior Bowl and the East-West Shrine games and was drafted in the 4th round (12th pick) of the 1978 NFL by the St. Louis Cardinals. He spent 5 seasons in the NFL and later played in the USFL.
Posted by Streit at 8:38 AM 1 comment:

On Memorial Day, we honor a Georgia legend who would fight in World War II following his football career at Georgia. To all of the veterans and those who gave their lives for our country, God bless you. Happy Memorial Day! 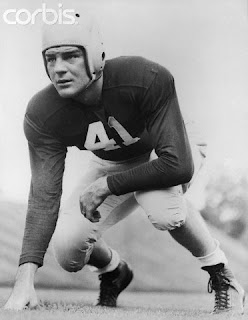 "In my opinion, George Poschner is perhaps the greatest competitor of all time, both on and off the field. I have never known anyone with more courage on the football or the battlefield".
These are the word used to describe George Poschner by Georgia legend Frank Sinkwich. The two were longtime friends from Youngstown, Ohio. When Sinkwich accepted a scholarship to play football for Georgia, he did so on the condition that Poschner would also receive one. Little did Georgia know they were getting not one, but two future All-Americans.
Poschner played end for the Dawgs from 1939 until 1942. He earned All-American honors during his senior season in 1942. As the Bulldogs were marching towards their first National Championship, Poschner was a key passing target for Sinkwich. His biggest game came in the victory over Alabama, where caught two key passes in the fourth quarter to help secure a 21-10 victory.
He was drafted in the 1943 NFL Draft, but instead enlisted in the US Army. He was honored with the Bronze Star, Purple Heart, and the Distinguished Service Cross for his service during World War II that ultimately cost him both of his legs. He was inducted in the Georgia Sports Hall of Fame in 1982.
Posted by Streit at 10:00 AM No comments: 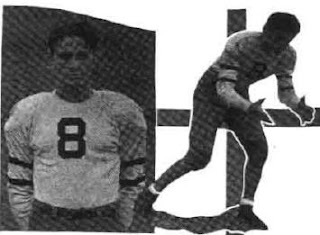 Ralph “Red” Maddox played under Coach Harry Mehre during the late 1920’s and early 1930’s. He was the leader amongst a group known as the Flaming Sophs of ’29, a group of sophomore players who were all redheads. Maddox was named to the International News Service All-American team in 1930 and returned to lead a strong Georgia squad in 1931. Against an incredibly tough schedule in 1931, Georgia would finish with an 8-2 overall record, including victories over Florida, Auburn, and Georgia Tech. The Maddox led line was very strong, leaving holes for a backfield that averaged 260 yards per game on the season.

Maddox finished his career at Georgia in 1931. He fought and was killed in the invasion at Normandy in World War II.
Posted by Streit at 10:35 AM 1 comment: