(This post has nothing to do with football. Sorry.)

I'll admit, I am not the biggest music fan in the world. I've been to a few Dave Matthews Band concerts and even went to the Zack Brown show in Jacksonville last fall the night before the Cocktail Party, but I rarely attend shows live. However, there was a period in my life where going to see concerts was much more common and that was during the five years I spent at Georgia. Athens has often been called the best local music scene in the country, have produced the likes of REM, Widespread Panic, and even a couple of classmates of mine who are better known today as Lady Antebellum.

Here some of the memorable shows and bands I remember from my days in Athens:
Jennifer Nettles with John Mayer - August 2000

Yes, you read that right. In the summer of 2000, my friend convinced me to go see some guy named John Mayer, who he described as Dave Matthews-like, open for Jennifer Nettles. Little did we know that the approximately 50 people that were at that show at the 40 Watt were watching two future Grammy winners. Jennifer Nettles went on to become the lead singer for Sugarland and John Mayer went on to be come...a douchy version of John Mayer. I saw John Mayer play a few more times in Athens before he got big, including the show at the Georgia Theatre when they recorded the video for "No Such Thing."

Sister Hazel
Probably the best known band that always seemed to play in Athens about once a semester. Yes, I know they are from Florida but they sure were fun in concert.

Jupiter Coyote
I saw them play about 10 times in a two year period. My sister had their CD from when they used to play in Statesboro. Great southern rock that never took off on the radio.

Kinchafoonee
If you wanted to hear a bunch of drunk Georgia kids sing songs that were popular when their parents were young and watch grown men cry when they played "Amazing Grace", the Kinchafoonee Cowboys were your type of band.

And, the last band I want to mention is one that seemingly fell into obscurity since I cannot find any mention of them anywhere on the internet. The band was called BlueString they played southern rock/folk music that included like 10 people in the band playing guitars, fiddles, and banjos. I saw them two or three times my freshman year when I could stumble back to O House from the Georgia Theatre. But then I never heard from them again.

So what are your favorite memories of seeing bands play in Athens? I'm sure a lot of us saw the Dave Matthews Cover Band, Corey Smith, and may have even caught an elusive performance by Michael Stipe. Leave your stories in the comments. 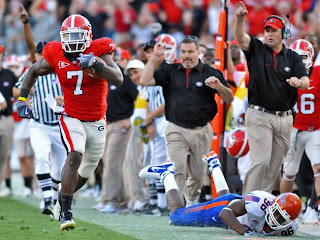 A 5 star recruit from Plant High School in Tampa, Florida, Charles was one of the most interesting recruiting battles in the 2009 class. He was ranked as the #3 tight end in the country and was highly sought after by Georgia, Florida, and Florida State. During a recruiting visit to Florida, Charles famously knocked over and broke the Gators 2006 National Championship trophy. After waiting a month after national signing day, Charles finally decided to follow his high school teammate Aaron Murray to The University of Georgia.

Orson Charles may have been the most talented pass catching tight end to ever come to Georgia. But because he played during a time when the Georgia line was either struggling or the running back situation was unsettled, he was called on to be a blocker just as much as a receiver. He never had more than 6 receptions in a single game, but one of those times was arguably his best game at Georgia. In the 2010 Florida game, Aaron Murray found his high school teammate for a couple of big catches including a touchdown. His best single play was an amazing leaping touchdown catch against Ole Miss last fall.