This caught my eye this morning. Brice Butler was a star at Norcross but chose to go across country to play for Pete Carrol and the USC Trojans. Apparently, he did not fit into Kiffin's system, only catching 9 passes this season. The article says he is planning to transfer to an FCS school so he can play immediately, but how hard would it be to convince him to come home to Georgia, sit out a season and then play for the Bulldogs?

Jarvis Jones was a member of the same recruiting class at USC and decided to come home after things did not work out in LA. Butler could come on campus as a walk-on this fall and not count towards scholarship limits until next season. I know Mike Bobo is tied up with Crowell and Drew right now, but I think this would be a phone call worth making.

Here's a look back at Butler's highlights from his high school career and his freshman season at USC:

Get Your Donations In

As most Georgia fans know, the deadline to submit donations to the Hartman Fund is February 15. Donating to the Hartman fund allows you to become eligible to purchase season tickets for the University of Georgia football games. As I documented here on the blog, last year I finally accumulated enough points to be eligible to purchase season tickets. The minimum donation to buy tickets last year dropped for the second consecutive season. After peaking at a ridiculous amount of more than $10,000 before the '08 season, the donation minimum last year to start new tickets fell to around $1,500. With the combination of the bad economy and a disappointing 2010, I expect the donation minimum to drop again. I know many of you are frustrated with the football team, but here are some reasons why you should make the donation this year:

1. This may be the lowest donation minimum to start new tickets you will ever see. Once you have tickets, the minimum donation per ticket to maintain your seats is $250 a year. If you want to buy 4 season tickets, that is going to cost you $1,000 a year in donations anyway. You may only have to donate the minimum requirement to maintain 4 seats to start your own tickets this year.

2. The Athletic Association needs donation to continue to revamp the facilities on campus. The result of the 2008 donations are the recent renovations to Stegeman and Butts-Mehre. Having nice facilities goes a long way with attracting recruits. I've heard people say they are going to cut their donations as a sign of displeasure for the recent season. While that is a personal choice they have every right to do, cutting donations is not going to help the program get any better.

3. We don't want to end up like Tennessee and Auburn, selling tickets to the general public. Georgia is one of 4 SEC schools that sold out all of its games last season. That is something to brag about. Despite their run to the national championship, Auburn failed to sell out all of its games this season.

4. We only have 6 home games this year. That means the cost to buy your tickets on top of the donation will be $80 less (if you get two seats) than it will be next year when we have 7 home games.

UPDATE: One more thing, Hartman Fund donations are 80% tax deductible. For those of you who itemize, there is a nice tax deduction to put down.
Posted by Streit at 11:33 AM 4 comments:

Beating the Gators: Fred Gibson came through in 2002

One of my favorite basketball memories from my days at Georgia was the 2002 game against the Florida Gators in Gainesville. Florida came into the game ranked #2 in the nation and was a 16.5 point favorite. Georgia was enjoying a fine season at 14-3, that included a victory over then #8 Kentucky just the week before. But coming off a loss at home to #16 Alabama, few expected the Dawgs to steal a victory from the Gators at home.


Georgia was Jarvis Hayes and Ezra Williams, who would combine to score 42 points in the game. I remember the balance of that Georgia team, with Rashad Wright running the point and the Hayes brothers up front. For Florida, I remember the combination of Matt Bonner and Udonis Haslem leading the Gators to a 39-36 lead at half. But the Dawgs were able to come back and take the lead into the waning minutes of the game. Coach Herrick sent a reserve guard who had recently joined the basketball team after the end of the football season.


That player was Georgia wide receiver Fred Gibson. Gibson had originally committed to play football for Steve Spurrier at Florida, but switched his commitment to Georgia during the week before national signing day. After having an amazing freshman season on the football field, the Florida fans were ready to taunt Gibson, a player they felt had screwed them over. Gibson got the ball on three consecutive possessions with the Gators just outside of striking distance. Each time he was fouled and sent to the line. I kept wondering why we were leaving a football player out on the court who had little experience in such a crucial situation. 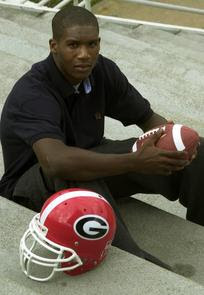 Gibson answered the call. He nailed all 6 of his free throws, helping secure the 84-79 victory. Gibson returned to Athens as probably the most popular player on the team. Gibson would only play one season at Georgia, but that one day in Gainesville will forever hold his place in Georgia basketball history.