'09 Recruits who may start this fall

With signing day complete, we can now begin to look forward to finally seeing some of these players on the field this fall. Two of our new freshmen have a good chance at having an immediate impact and could be starting by the end of the season.

The first is corner back Branden Smith. With Asher Allen gone, there is an open position at corner and Smith would fit right in. Not only will he fit well at corner, but I expect Smith to see plenty of playing time returning kicks this year. Coach Richt has even hinted at putting him on offense.

The second is surprise Georgia commit Marlon Brown. The 6'5'' receiver should line up nicely opposite 6'4'' AJ Green. They will be quite a tandem for Joe Cox to throw at this fall. And for those of you who don't know much about Brown, here are some of his highlights:


The 2009 season is under 7 months away and it cannot get here soon enough.

This song is dedicated to all the recruits who just committed. I'm sure they always felt someone was watching them, mainly over zealous middle aged men who were stalking them 24/7.

Posted by BulldawgJosh at 11:00 AM No comments:

The Recruitment of Herschel Walker

With National Signing Day upon us, I thought it appropriate to take a look back at the most important recruit in the history of Georgia football: Herschel Walker. Recruiting in those days was not the same business as it is today. There was no Scout.com, recruiting updates in the paper, “Countdown to Signing Day” television shows, or eight hours of ESPNU coverage with Tommy Tuberville. If you wanted to know who the top prospects were, you paid for a newsletter that listed names and stats and that was it. However, the recruitment of Herschel Walker was a story that did create quite a stir in the media. As Henry Leifermann of the New York Times would later describe it:

In the spring of 1980, Herschel Walker was a black teenager in the mid-Georgia town of Wrightsville (population 2,350). Walker was not just the star of the Johnson Count High School football team. He was the most sought after player in the country.
College recruiters flew into Wrightsville by helicopter, some staying months, wooing Walker. One, from the University of Georgia, lived in a house lent to him by a wealthy white alumnus of Georgia, and it was Georgia, to the regret of hundreds of other colleges, that Herschel Walker chose to attend. 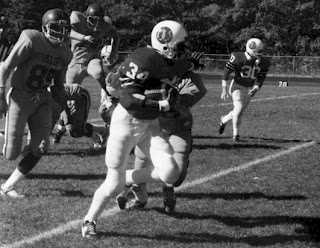 While the Bulldawg nation hoped that the pheonom from Johnson County would sign with the home-state team, his signing was never a foregone conclusion. Clemson and Southern California were also pushing very hard to sign Walker. Unlike the players today, who announce their choices on national television sometimes months (now even years) before National Signing Day, Walker remained uncommitted until Easter. As Easter approached, Coach Dooley had planned to take a trip with his wife to Boston. On the Thursday before, however he decided he could not leave the state until Herschel Signed. Needless to say, Barbara Dooley was furious.

Barbara went on to Boston, while coach stayed in Athens. On Easter Sunday morning, assistant Steve Greer came and told Vince that Herschel was ready to sign. The story goes that Herschel ended up picking Georgia on a coin flip (where is that lucky coin now?!?) They went to Wrightsville but had to wait outside of the Walkers’ house while Herschel inked his commitment letter because they had already used the allotted amount of NCAA visits. 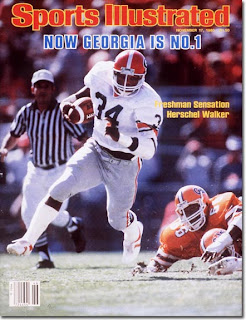 Just a few months later, Herschel Walker would carry Georgia to the 1980 National Championship. He is the most important commitment that Georgia has ever received and the madness around him sparked a change in national coverage of the recruitment of high school athletes. As Mark Bradley wrote in the AJC,

Even after Herschel, it didn’t happen overnight. First came specialized publications, then a groundbreaking recruiting talk show on Nashville’s WLAC, and then, ultimately and inevitably, the Internet. Supply keeps rising to meet demand, and today there are fans of all schools who seem to care more about winning — or, to be precise, about being perceived as having won — on a Wednesday in February than on any autumn Saturday.
Maybe this strange business would have gotten huge anyway, but every person I’ve ever asked, and I’ve asked several, has invoked one word to pinpoint that moment when recruiting struck the communal chord that resounds today — Herschel. He signed. He played. He changed the football world.

While I disagree with Georgia entertaining the idea of Bobby Knight as its basketball coach, the mere thought of it provides the Bubba 'N Earl blog an excellent opportunity for commentary...

WARNING: Some very strong language is used here as Coach Knight tries to get his golf ball out of the sand bunker. We will be bringing you these Knight classics all week long because they're just too damn funny not to. And who hasn't used these words while trying to get out of a green side bunker before...

While most of us here at Bubba 'N Earl are fans of Bobby Knight, it is safe to say that we don't want to see him coaching the UGA basketball team. That being said, this never gets old:

Lewis Grizzard on Basketball and Recruiting

With Georgia currently in the national headlines concerning the potential of Bobby Knight coming to Athens and National Signing Day just two days away, I thought it appropriate to share this Lewis Grizzard story concerning recruiting violations, college basketball, and how he might fix the entire mess.

"My alma mater, the University of Georgia, has been placed on probation by the National Collegiate Athletic Association for recruiting violations within its basketball program.
Georgia gave a prospect a T-shirt. It is against the NCAA rules to give a prospect anything, even a T-shirt.
Georgia gave a friend of another prospect a ride to a restaurant and then to his hotel.
It is also against NCAA rules to give a friend of a prospect anything, even a four-mile ride.
A T-shirt here, a pair of shoes there, a ride for a prospect's friend and Georgia's Athletic Department and the enitre school suffers the embarrassment of probation.
"I know the charges were minor," a member of the Athletic Department told me. "But nobody outside the inner circle really pays attention to the details and so people think we are buying and selling kids like we were slave holders."
What was the Georgia coach supposed to do when the prospect's friend asked for a ride? Tell him to walk and probably lose the prospect because he turned his friend out on the street?
We're talking big-time college basketball here, where millions of dollars and extended contracts are on the line. If a tall kid who can dunk with both hands asks for a T-shirt, you give him a T-shirt.
I'm not defending my school, here. Georgia knows the rules, yet Georgia broke the rules, as silly as they might be, and they got caught and they got punished and that's the name of that tune.
But the NCAA is like the IRS. They go after you, they get you, with even some help from college coaches who turn each other in, some standing on their pedestals claiming piously "We will bring these cheaters to their knees."
Horse dung. They turn each other in for strictly selfish reasons. You get you r rival in trouble with the NCAA and the NCAA takes away a few of its scholarships, and all of a sudden you're beating his brains out and you become a genius with a fat raise.
College basketball players are shaving points for gamblers and are going to jail for it. Millions are being handed out for television contracts, big-time coaches are getting rich and the NCAA is worrying about a high school kid getting a free T-shirt?
I don't have a solution for all this idiocy, but I know how I wish college basketball and footall worked.
Whack Hyder, who coached basketball at Georgia Tech before he got sick of recruiting and quit, had the idea years ago.
"What I would like to be able to do," said Whack, "is to put a sign on the bulletin board in the PE department that said, `Any student desiring to try out for the men's basketball team, report to the gym at 4 o'clock.'
"I play with the kids who happen to come to my school. You play with the kids who happen to come to yours."
Thus, recruiting becomes a thing of the past. The sport purifies itself and all the athletes get are a pair of shoes, socks, a jock, and an opportunity to have a little good clean fun."
- Lewis Grizzard, "Georgia on Probation"

***This story and others can be found at the official Lewis Grizzard website, http://www.lewisgrizzard.com/columns/archive/.
Posted by Streit at 8:11 AM No comments: