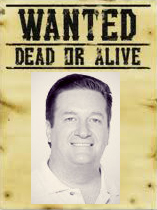 For those who have not yet seen the end of Coach Richt's post-game press conference, I invite you to scroll down and watch the below video first, which comprises the entire exchange you've likely already heard about. The questioning voice is none other than Atlanta 680 AM/The Fan's Chuck Oliver.


For those very unfamiliar with Chuck, Chuck is the self-proclaimed "king" of college football (even claiming the moniker below his mugshot on his own website). He supposedly is even Atlanta's "most knowledgeable college football authority," per 680's bio.

Chuck, your English degree is worth as much as a piece of tattered toilet paper still lingering around in Auburn, Alabama. Do not ask a question in a passive voice, hiding behind anonymous 'some people' when asking a direct question you want answered. Even if within your own personal Candyland you are a voice of 'The People,' in that room you are a credentialed media member, a purported professional (supposedly the "most knowledgeable" one too!). Ask a question and own it, or just don't ask it at all if it is, in fact, indefensible. Perhaps the few journalism credits you picked up while struggling through Auburn's rigorous academic program for 5 1/4 years didn't cover any of that.

Does the supposed "king" know that this was the 3rd closest final score in SEC Championship history? Did the "king" watch the same game that everyone else did, the one the national media pundits are already labeling the 2nd-greatest SEC Championship game played? Do you even realize that Coach Richt has a higher career winning percentage than Saint Nick, or that Aaron Murray nearly carried his team on his back to Miami?

If not, Chuck, perhaps your time as a C-USA TV analyst, as well as your 5-year stint as a defensive line coach at South Gwinnett High School, give you a much clearer perspective on this particular game, and football in general, than every single person who actually watched this game. Maybe Nick Saban will be looking for a "king" of college football, a veritable guru of the gridiron, to supplant Kirby whenever he leaves for greener pastures?

Either way, Chuck, I would start brushing up on the 'ol resume, since your clear absence of professionalism, knowledge of football, and journalistic integrity all clearly reflect your one quality that shines through above all else: you're full of hot air.

I'm sure that cherished '68 Vista Cruiser of yours is still available to take you back out West, where some tiny Texas town, outside of your beloved hometown of Houston, is waiting to crown their own Friday Night Lights "king" of football.  Clearly you do not belong in front of a microphone, period, in a major media market, and it is nigh time for 680/The Fan to "dethrone" you and let the real journalism professionals get back to work.
Posted by Gov Milledge at 5:59 AM 16 comments: