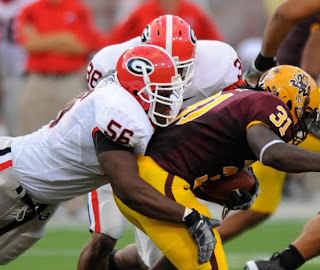 Jersey number of defensive tackle Geno Atkins. Atkins was a force on the defensive line in 2008 with a team high 32 quarterback hurries.
Posted by Streit at 12:35 PM 1 comment:

57
Jersey number for former linebacker Mo Lewis, who played for the Dawgs from 1987-1990. Lewis would go onto to a Pro Bowl career in the NFL. Lewis is most famous for making the hit below on Patriots QB Drew Bledsoe in 2001 that knocked him out for the remainder of the season. This allowed a low round draft pick from Michigan by the name of Tom Brady take over and the rest is history.
Posted by Streit at 8:09 AM 1 comment:

Labels: Dawgs in the NFL, Mo Lewis, The Countdown 2009

College Football Live on ESPN has been running a series where they visit each state as we count down to the beginning of the 2009 season. For each state they run a poll of the best team in the state's history. For the state of Georgia, the two leaders are the 1980 Georgia team (47%) and the 1952 Georgia Tech team (39%).

A second poll currently has Vince Dooley leading Bobby Dodd as the best coach in the state's history (34% to 32%).

If you have a minute today, take the time to head over and vote for the 1980 Dawgs and Vince Dooley here. We don't want to give the Techmites another thing to gloat about.

Thanks to reader Twilb Dawg for the suggestion.
Posted by Streit at 3:45 PM No comments:

Recruiting 2010: Competing with Florida and Bama

It is July and news is slow right now, what better a time to talk recruiting. With the commitment of Brandon Burrows yesterday, the Georgia recruiting class for 2010 is starting to look really impressive. Georgia has already picked up 7 commitments in state and another 6 in the state of Florida. What is most impressive about this class is how well Georgia has fared going head-to-head with Florida, Alabama, and other southeastern schools. Here's a look at the commitments the Dawgs have so far and other offers each player had from schools in the southeast:

While Alec Ogletree is no doubt the prize of the class so far, I really think that the combination of Da'Rick Rogers, Marlon Brown, and AJ Green will be a lot of fun to watch in the Georgia passing game in 2010. 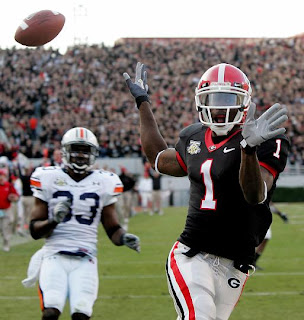 Yards on the touchdown pass from Matthew Stafford to Mohammed Massaquoi during the first half of the Georgia "Blackout" victory over Auburn in 2007.
Posted by Streit at 8:14 AM No comments: 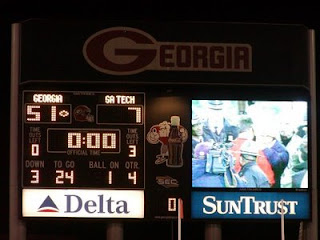 Wins against Georgia Tech, the most victories for Georgia against any team. Georgia will go for win #60 in the series in November.
Posted by Streit at 8:19 AM 1 comment:

What Gordon Beckham thinks about Transformers 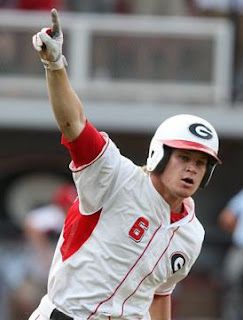 Just wanted to make sure everyone saw Bulldawg Illustrated's contest to find the best beer joint in Georgia in honor of the late, great Lewis Grizzard and Lucille, the first person to ever sell him a beer.

A good read and a good contest. If you have a winner, make your way over to Bulldawg Illustrated.
Posted by Earl at 12:02 PM No comments:

Labels: Contests, I Need A Beer

60
Distance, in yards, of Kevin Butler's game winning field goal against Clemson in 1984.
Posted by Streit at 8:15 AM 1 comment:

As the summer days drag on, I am finding myself spending lots of time day dreaming about how awesome the start of a new football season will be. The only other things I can think about are the memories I have from each game last year.

The 2008 season was the first time I have ever attended every game (home, away, and the bowl game). It is no small feat generally, but with a trip to Arizona and back to back games at LSU and Jacksonville, it was a deep commitment.

On the Sunday night following the victory in Baton Rouge (and after everyone else in our crew had left for Atlanta), C-matt and I were downing hurricanes from Pat O'Briens while watch some great jazz music next door at Preservation Hall.

Towards the end of the final of the three performances that night, an older gentleman (approx 65-70), began talking to C-matt and I while the band was taking a break between songs. Seeing our Georgia polos, he began telling us that he lives in Florida, but is from New Orleans and is an LSU grad.

After discussing the previous day's game, he pointed over to his son sitting just outside the room where the music was being played. He began to tell us how his son was a Florida alum, and was absolutely "A TYPICAL GATOR!" By "A TYPICAL GATOR," he meant his son was an overly arrogant Florida alum and Orlando resident who couldn't give a shit less that he was at a historic venue listening to what many consider the best jazz performances in New Orleans.

At this point in time, this old gentleman became my hero.

Eventually, his son came over and began talking to us. "I just bring my dad here to appease him everytime we're back in New Orleans. Old man is crazy in his age, ya know?"

After a few minutes, the son went back outside where he sat down and typed on his blackberry and continued his many ways of douchebaggery.

"TYPICAL GATOR! Look at him! Sitting there and couldn't give a shit where he is! A TYPICAL GATOR."

After meeting the son, we toasted the old gentleman and agreed with him that his son was "A TYPICAL GATOR", and we thanked him for coining the "TYPICAL GATOR" phrase.

That old LSU fan was dead on about Florida fans and their typical attitude of not caring about anything that doesn't relate to themselves or Gator University.

Eventually the show ended, the old man left, and the rest of the night became a blur (it was New Orleans).

But, C-matt and I will always remember running into the old LSU grad at Preservation Hall, and his "TYPICAL GATOR" son.
Posted by BulldawgJosh at 9:54 AM 2 comments:

61
Carries by running back Caleb King during his freshman year in 2008. He had 95 yards on 12 carries in the season opener vs. Georgia Southern and scored first career touchdown against Central Michigan.
Posted by Streit at 8:36 AM No comments:

62
Jersey number for Charley Trippi. Trippi won the Maxwell Award in 1946 and went on to be the #1 overall pick in the NFL draft.
Posted by Streit at 7:00 AM No comments: