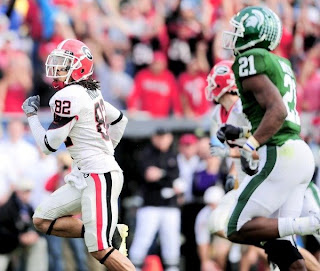 Yards on a touchdown pass hauled in by receiver Michael Moore during the 2009 Capital One Bowl. Moore hopes to fill the void left by graduated receiver Mohamed Massaquoi.
Posted by Streit at 9:43 AM No comments: 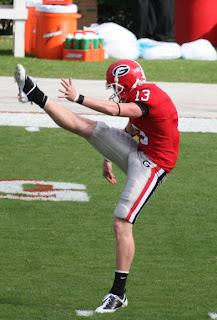 Average yards per punt for Drew Butler during the 2008 season. Butler takes over the punting job after the graduation of Brian Mimbs, who averaged 44 yards a kick last season.
Posted by Streit at 9:17 AM 1 comment:

37
Number of times Georgia and Tennessee have faced off on the gridiron. Tennessee leads the all-time series with 20 wins, 15 losses, and 2 ties. Georgia has won 6 of the last 9 games in the series including a 26-14 victory in Athens in 2008.

Posted by Streit at 8:39 AM No comments:

Replay of the Capital One Bowl on ESPN Classic

Need a quick fix for your Georgia Football hunger? ESPN Classic is showing a replay of the Bulldogs' 2009 Capital One Bowl victory over Michigan State on Thursday night at 9 PM. Rewatch the final game of the Stafford/Moreno era as we prepare for the final month countdown to the start of the 2009 season.

How bittersweet was this play???
Posted by Streit at 6:52 PM 1 comment: 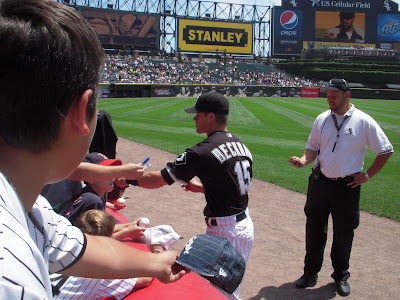 The other week I went on vacation to Chicago to see some Cubs games, and I also got the opportunity to go down to the southside and see Gordon Beckham and the White Sox.

White Sox fans LOVE Gordo. His t-shirts are everywhere, people were even wearing jerseys, and every girl from 14-40 was swooning over him. If I recall correctly, one girl was yelling at Gordo to get an autograph. We he motioned to her that we would come over after his workout, she literally screamed like a banshee and said, "I think I might just die when he comes over here!!!!."

As you can see, ol' Gordo is having a terrible time in Chicago. I mean, it must be awful to be hitting .300 and have every female in the town in love with you. I truly feel sorry for the dude.

The screenshots of him on the videoboard are my favorite: 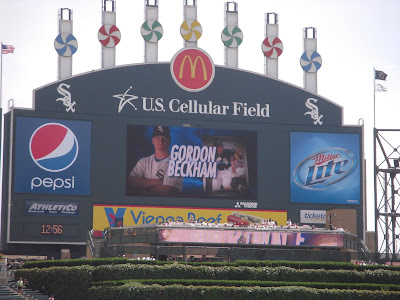 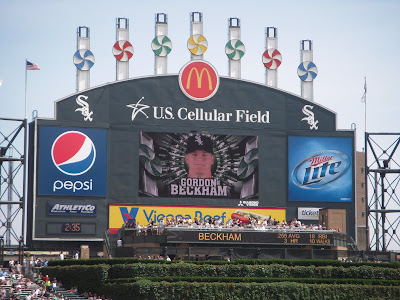 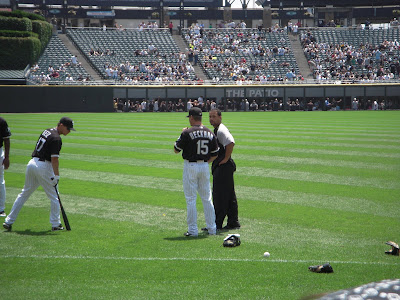 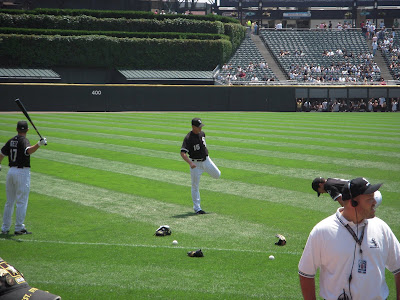 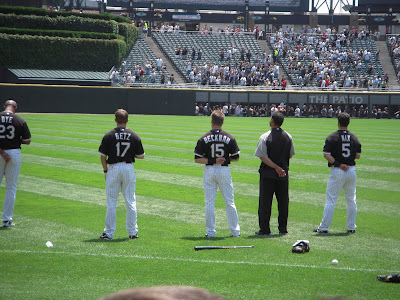 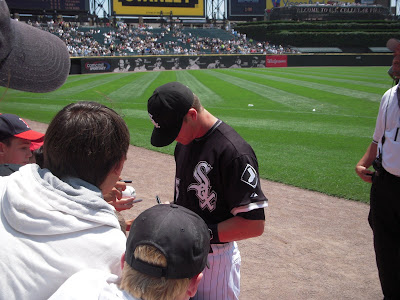 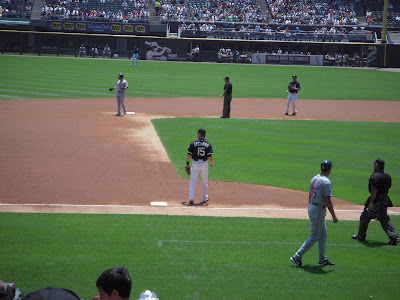 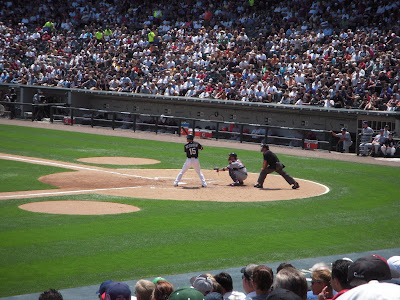 I also saw Jeff Samardzija warming up for the Cubs on Wednesday (when they were playing the Braves). 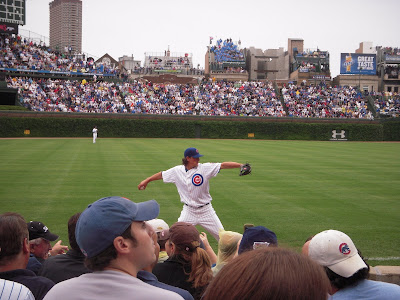 He didn't get into the game, but that's probably because he still sucks and has trashy chin hair.
Posted by BulldawgJosh at 9:51 AM 2 comments: 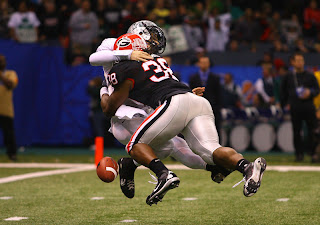 Jersey number of 2008 Sugar Bowl MVP Marcus Howard. Against Hawaii, Howard had 3 sacks, a forced fumble, and a touchdown (after the huge hit above on Hawaii QB Colt Brennan.) Howard was perfect in Willie Martinez's defense, a quick end who had the ability to put lots of pressure on the quarterback. Howard now plays linebacker for the Indianapolis Colts. Here is a look at some of Howard's other career highlights at Georgia.

With the departure of Matthew Stafford and Knowshon Moreno, the Bulldogs do not figure to have a serious contender for the Heisman Trophy on their squad in 2009. Even if either of those players returned, I doubt they would have been able to wrestle the award away from the three players who were the finalists for the award last season - Colt McCoy, Tim Tebow, and Sam Bradford. Considering that two of those players already have a Heisman and the other could have easily won the award last season, I see no way that one of these three does not take home the trophy in New York come this December. While Georgia fans do not have one of their own to root for, they should all be rooting for Sam Bradford to become only the second player to win the Heisman Trophy.

Let me state, for the record, that I do not think Sam Bradford is necessarily better or more deserving to win the award over Tebow and McCoy. However, as the defending champion, there's evidence to support Georgia fans rooting for him as the best player. But my argument here is less about why Sam Bradford should win the Heisman and more about why Georgia fans should root against Tebow and McCoy.
Let's start with Tim Tebow. Do I really need to spell it out? HE PLAYS AT FLORIDA. I bleed Georgia red and I will always root against the Gators when given the choice. Some people will argue that it looks good for the SEC when a player from the conference wins the Heisman, but I could really care less. A second Tebow Heisman would mean another year of Florida playing well and would probably include another victory over the Dawgs in Jacksonville. For those reasons, Georgia fans should not root for Tim Tebow to win the Heisman this fall.
Next, we move on to Texas quarterback Colt McCoy. McCoy is entering his fourth year as the starting quarterback in Austin and the Longhorns expect to battle Bradford's Oklahoma Sooners for the Big XII Championship again this fall. I think McCoy is a fantastic player whose passing and running makes him a top candidate. The real reason Georgia fans should root against McCoy is that for him to win the Heisman, the 'Horns will most likely need to be a contender for the national title and thus they would need to finish with more than 10 wins on the season. Colt McCoy has won 32 games as the starting quarterback for Texas and if he wins more than 10 games this fall, he will become the winningest quarterback in NCAA history. As I pointed out in The Countdown, the current record for victories as a starter is held by former Georgia starter David Greene, and I do not want to see another Bulldog-held NCAA record fall.
With the cases against Tebow and McCoy, that leaves Bradford the lone man for me to root for this fall. Boomer Sooner, Bradford!

39
Yards ran back for a touchdown by Lynn Hughes on an interception thrown by Florida quarterback Steve Spurrier in 1966. Florida entered the game 7-0 after beating Auburn the week before and had locked up the Heisman Trophy. The Dawgs would intercept three passes on the day as Spurrier and the Gators would miss out on a National Championship.

(Hughes, first from the left, as a member of the 1966 Playboy All-American team. This was the only picture I could find with Hughes online.)

Posted by Streit at 7:25 AM No comments: 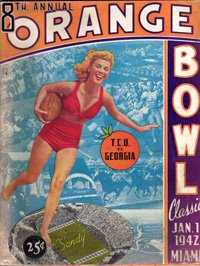 Points scored by the Bulldogs in their first bowl victory, a 40-26 defeat of Texas Christian University in the 1942 Orange Bowl.

Frank Sinkwich led the attack for the Bulldogs, completing 9 of 13 passes for 243 yards and 3 touchdowns. Sinkwich added 139 yards and another touchdown on the ground. as he earned game MVP honors. The Dawgs led 33-7 at the half, prompting Coach Wally Butts to call it the greatest offensive performance he had ever seen.

Posted by Streit at 9:09 AM No comments:

41
The number of UGA records that Herschel Walker holds that UGA recognizes. He holds 16 SEC records and 11 NCAA records that are recognized. 1981 was probably his best season even though he is more recognized for his 1980 freshman season and his 1982 Heisman. Herschel averaged 171.9 yards a game during his sophomore year in 1981.
Posted by Streit at 10:28 AM No comments: