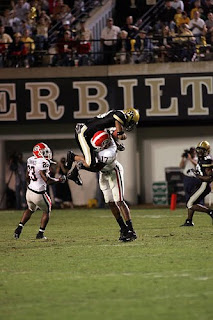 Blue doing his best WWF impression on a Commodore.

Greg Blue was a 6’2’’, 215 pound, killing machine. The safety from Atlanta’s Banneker High School came to Athens as a member of Mark Richt’s first recruiting class. He was red-shirted in the fall of 2001 and saw his first game action during the 2002 SEC Championship season. Playing behind Thomas Davis and Sean Jones, Blue made 42 total tackles for the Georgia defense that finished fourth in the nation. He continued his back-up role in 2003, registering another 42 tackles, along with two QB pressures and three pass deflections.

In 2004, Blue earned a starting role at rover. Working along-side All-American Thomas Davis, the duo was one of the hardest-hitting pairs in all of college football. Blue totaled 80 tackles, a sack, three tackles for a loss, and caused three fumbles. During his senior season, Blue was named a permanent defensive caption for a team that would win the second SEC title of his career. Blue led Georgia with 96 total tackles and hauled in two interceptions. The secondary finished seventh in the nation in pass defense and Blue received a wide variety of accolades, including being a member of the All-SEC team and a consensus All-American (AP, AFCA, Walter Camp). Here is a look at some of the highlights from Blue’s career:

For his career, Blue totaled 176 tackles and was a member of two SEC Championship teams. He was drafted in the 5th round of the 2006 NFL Draft by the Minnesota Vikings. After a successful rookie season, he was cut during training camp in 2007. He has continued his football career in Canada, playing with the Toronto Argonauts.
Posted by Streit at 2:38 PM No comments:

Today, we present our only punter on the list of the 100 greatest players in Georgia history. Like AJ Green, this player is also still active and has two years of eligibility left. This will be the final active player to appear in the countdown.

Drew Butler, Punter #13 (2008 – Present)
Being the son of legendary Bulldog kicker Kevin Butler, Drew Butler had large shoes to fill when he accepted a scholarship out of Peachtree Ridge High School. Butler red shirted in 2007 and was the back up to senior Brian Mimbs during the 2008 season. Butler was used sparingly in short punt situations in 2008, punting 3 times for 107 yards. Going into the 2009 season, many Georgia fans were concerned if Butler would be able to continue on the excellent job punters (Kilgo, Ely-Kelso, Mimbs) had done under Coach Right. By the end of the season, no one would question Butler’s ability. 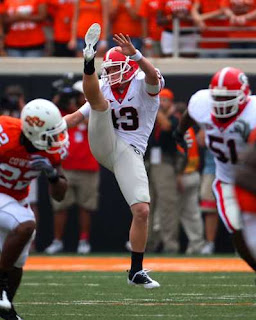 In the 2009 season, Drew Butler won the Ray Guy Award given annually to the top collegiate punter in the nation. He was unanimous All-American selection and first team All-SEC. And why did Butler walk away with these awards? Because he was the best punter in the nation and the competition was not even close. Butler punted 56 times for 2,691 yards which included 19 punts that were downed inside the opponents’ 20 yard line. His 48.1 yard per punt average led the country by nearly a two yard per punt average. That same differential (2 yards) that Butler had between himself and the #2 punter in the country equaled the distance between the #2 punter and the #15 punter. Butler also kicked a career long punt of 75 yards in the 2009 season opener against Oklahoma State.
It was truly an amazing season for Butler in Athens and with two years of eligibility remaining, we can only expect continued excellence from Butler over the next two years.
Posted by Streit at 5:00 AM 2 comments:

Welcome to the Bubba 'N Earl countdown of the 100 Greatest Players in Georgia Football History. To get things going, we present a current Bulldog. Because his career at Georgia is not over, he remains at the bottom for now. Come next year, he will be in a very different spot on this list.

100: AJ Green, Wide Receiver #8 (2008 – Present)
“You put the ball in his reach, and he will gather it in - just like the monster of the sea.” – Loran Smith
This fall, Georgia fans will witness what will most likely be the final season in Athens for arguably the most talented receiver in Georgia history. Adriel Jeremiah Green, better known as AJ, came to Georgia as the crown jewel of Mark Richt’s 2008 recruiting class. Green was ranked as one of the top players in the country for his career at Summerville (SC) High School, where he caught 279 passes for 5,373 yards (second all-time in the National Federation of High School’s records). After arriving on campus in the summer of 2008, Green was hampered by an injury that limited his playing time in the first few games of the season. When Georgia traveled to Tempe to take on Arizona State, Green had his official coming out party. He hauled in 8 catches for 159 yards and a touchdown in what was just the beginning of a great freshman season.
During his freshman year, Green would be named a Freshman All-American and the SEC Freshman of the Year. He caught 56 passes for 963 yards and 8 touchdowns. Among those catches included scores against Kentucky and Auburn that ultimately proved to be game winners.
During the first half of the 2009 season, Green was the difference maker that kept Georgia from having a terrible season. Never was this more apparent that the game against Arizona State. With the Sun Devils poised to take the lead with an easy field goal, Green blocked the attempt and Georgia took over. A few plays later (on third down), Green broke free from coverage and hauled in a long pass that set up the game winning field goal. The following week, Green made this amazing catch to give Georgia the lead late in the 4th quarter against LSU:
Green would continue to have a great season until suffering a shoulder injury against Auburn. He did not play again until the bowl game against Texas A&M (and still looked hurt). Overall, it was another fantastic season for Green. Despite missing 3 full games, AJ still put up 53 receptions for 808 yards and 6 touchdowns. Now heading into his junior (and most likely last season) at Georgia, AJ Green will be amongst the favorites for the Biletnikoff Award, given annually to the nation’s best receiver. Aaron Murray better enjoy having AJ to throw to, because before you know, he will be gone!
Posted by Streit at 5:00 AM No comments:

Tomorrow, we begin the countdown of the 100 greatest players in Georgia history. But today, before the countdown begins, I felt we should honor a non-Georgia player who played an integral part in four straight victories over Georgia Tech. So here is the 101st Greatest Player in Georgia Football History...
Reggie Ball, Quarterback #1 (2003 – 2006) 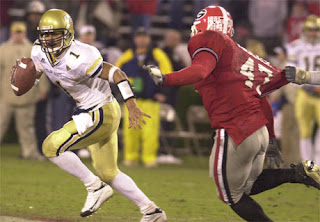 2003 – In first start against Georgia, the freshman was unable to find any type of rhythm, completing only 8 out of his 16 pass attempts. The game would ultimately end early for Reggie, after colliding with a member of the Georgia training staff caused him to sustain an injury. He was replaced by AJ Suggs and did not return. Georgia won the game, 34-17.
2004 – Georgia Tech rallied to get within 3 points before David Greene led the Dawgs to a field goal to take 19-13 lead in the fourth quarter. Reggie Ball helped drive tech down the field. On third and 21 from the Georgia 32, he spiked the ball because he said the sideline markers read second down. On fourth down he threw the ball away under Pollack's pressure after seeing third down on the scoreboard. Was it just me , or did I learn to count to 4 in kindergarten? 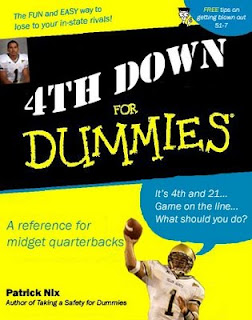 2005 – After a touchdown pass from DJ Shockley gave Georgia a 14-7 fourth quarter lead, Reggie Ball drove Tech quickly down the field (included a long quarterback run). But despite having Calvin Johnson, the best receiver in the country, to throw to, Ball instead threw an ill-advised pass towards Damarius Bilbo. The pass was picked off by Tim Jennings and the Dawgs held on for the victory.
2006 – In Ball’s final season at Georgia Tech, the Jackets came to Athens having already clinched a spot in the ACC Championship game. The Jackets were favored, but the game turned into a defensive battle. Georgia was unable to score a touchdown until a fumble by Reggie Ball was picked up from a pile up by Tony Taylor. Georgia scored late in the 4th quarter to take a 3 point lead, but Tech still had plenty of time to drive for the tying field goal. On third down, Ball threw up a pass to Calvin Johnson that was easily intercepted and secured the Georgia victory.
For his career, Reggie Ball went 0-4 against Georgia. That’s 1, 2, 3, 4 – in case Reggie decides to read this article. His inability to count, hold onto the ball, and keep his head under pressure helped the Dawgs continue their domination of NATS during the mid-2000’s. For that, he is worthy of the #101 spot on our list of the greatest players in Georgia history. 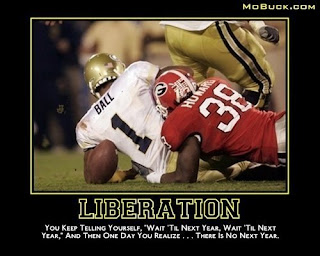 Come back tomorrow as we begin the 100 day countdown to the start of the 2010 Georgia football season.