With just 10 weeks to go until the start of the 2009 season, preview magazines and the internet have started laying out some early predictions. While I have not made my own top ten list or chosen a Heisman favorite, there are some things that I am pretty sure WILL NOT happen this fall. Here is my top ten list of things bound to fail in 2009(in no particular order).

1. Jimmy Clausen leading Notre Dame to a top 10 Finish
For the first time since the 1993 season, the Fighting Irish of Notre Dame won its bowl game. The Irish went 6-6 in the regular season, but after beating Hawaii easily to close the campaign, once again the media has Notre Dame ranked in the preseason polls. Once considered the top prep prospect in the country, Jimmy Clausen enters his third year as starter with high expectations. The schedule is certainly manageable, with the only two games (USC and Boston College) against teams that should handle the Irish easily. No matter how easy the schedule, this Notre Dame team will not beat a BCS team and once again Charlie and Jimmy will be answering questions from the Irish faithful next off-season.

Some of Jimmy Clausen’s Finest Work
2. Tim Tebow in the I Formation
If Florida fails to put up at least 60 points in their cupcake games early in the season, I see no way that Meyer continues to experiment with this new offense when it comes time to play LSU and Georgia. Tebow is the perfect quarterback in Meyer's spread and I foresee them going back to that offense full time by the middle of the season.
3. Kiffin having a winning season at Tennessee
He has made a lot of noise and a lot of enemies in his first few months as coach of the Vols, but a horrible offense mixed with the number of players who left the program will ensure Tennessee a second straight losing season.
4. Texas defeating Oklahoma but missing out on the Big XII Championship
If Texas goes into the Red River shootout and beats Oklahoma, they will play for the Big XII title. Mack Brown and Colt McCoy will not let their shot a Championship slip away because of a late season. Plus, I just can't see the 'Horns not getting sympathy votes after last season that would rank them ahead of OU if they finish with the same record in the conference.
5. West Virginia's offense minus Pat White 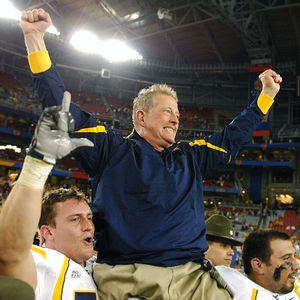 I've got a feeling it is going to be a long season in Morgantown this fall.
6. Georgia Tech throwing the ball
"If it ain't broke, don't fix it." After a successful first year at NATS, Paul Johnson has boasted that he had only installed part of his playbook last year. They keep talking about incorporating the pass more, but I just don't see Josh Nesbitt having that much success throwing the ball. Tech had a great season (by their standards) last year and with the backs they have, I see them continuing to run the ball most of the time this season.
7. Ole Miss winning the SEC West 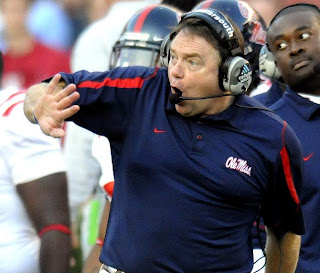 They have a great quarterback in Jevan Snead and they are a preseason top 10 selection by a number of publications. While I think they will be a good team, I am not buying into the hype. A combination of losses on both lines and an improving LSU team will keep Ole Miss out of the SEC Championship game once again. 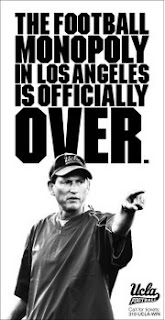 In year 2 of the Rick Neuheisel era, it will be more of the same. Pete Carroll and company will defeat UCLA this fall and continue to won the football spotlight in Southern California.

9. Rich Rodriguez leading Michigan to a Big 10 Championship
In year 2, Rodriguez will finally have some talent at his disposal after a 2008 season that saw walk-ons starting at key positions. He may also have found a quarterback in freshman Tate Forcier. The only issue in Ann Arbor this year will be experience and once again Michigan will find itself behind Ohio State in the final standings.
10. Georgia's use of directional kick-offs
The kick-off coverage was horrible in 2008 and Coach Richt has stated that they plan to continue to use the same strategy this season. However, they did not bring on a second kicker who is known for touchbacks just for show. I expect Brandon Bogatay to take over the kick-off duties and to be booming kicks out of the end zone on a regular basis. If you haven't seen any footage of Georgia's new kicker, check this out.
Posted by Streit at 8:06 AM 2 comments: 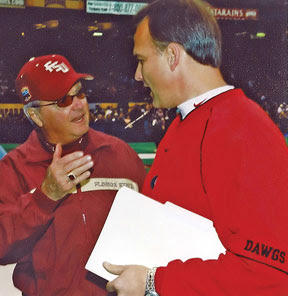 Longest interception return for a touchdown in a BCS game, turned in by Bruce Thornton against FSU in the 2003 Sugar Bowl. Georgia won the game, 26-13.
Posted by Streit at 5:00 AM No comments: 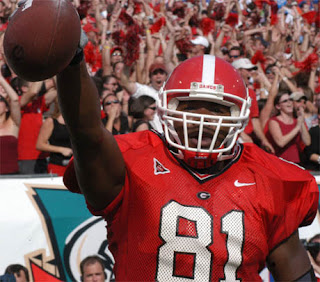 Leonard Pope was the 72nd overall pick in the 2006 NFL draft, taken by the Arizona Cardinals. Leonard is from Americus, Georgia and is a high school classmate of our very own Bubba.
Posted by Streit at 5:00 AM No comments:

73
As in 1973, the year of Larry Munson's famous Andy Johnson call in Knoxville. Georgia QB Andy Johnson, an Athens native and a star QB for Athens High (now Clarke Central), faked the pitch on an option late in the game. The UT team bit and Johnson walked into the end zone, Georgia won 35-31. One of the surprising things about that play was that when Johnson faked the pitch, he actually dropped the ball, but it bounced up right back into his hands as UT had installed astroturf. Listen for Munson's call at the beginning of this video.
"My God, Georgia's just beaten Tennessee in Knoxville."
Posted by Streit at 5:00 AM No comments:

74
Receving yards per game for AJ Green during the 2008 season, a Georgia freshman record.
Cox to Green - Get ready to see a heavy dose of that connection in 2009.
Posted by Streit at 5:00 AM No comments:

75
Georgia record for points scored in an SEC game. The Dawgs defeated Florida 75-0 in 1942 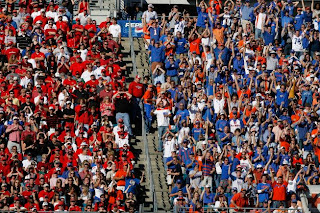 What I wouldn't give to beat the Gators by a margin like that again.
Posted by Streit at 5:00 AM No comments: 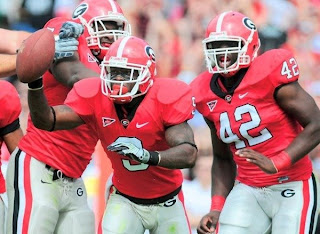 Tackles by safety Reshad Jones in 2008. Jones returns for his junior season along side senior Bryan Evans.
Posted by Streit at 5:00 AM No comments: