What’s on My Mind – The NCAA is Dumb, Winter Sucks, and Other Thoughts

1. The NCAA is talking about some stupid rule changes for football.
a. The NCAA wants to band players writing messages on eye-black. As much as I dislike Tebow, I had no problem with him putting bible verses on his eye black. This seems very stupid to me.
b. The excessive celebration penalty would cause a touchdown to be taken off of the board. This is ridiculous. The 15 yard penalty was already a judgment call that could have potential major impact on a game (see the Georgia-LSU game last year). Now you want to make a judgment call take points off the board. NCAA, please see this is a dumb idea.
2. The Winter Olympics are starting…and no one really cares. In my opinion, the Olympics rank third on the most important sporting events of the weekend behind the Daytona 500 and the NBA All-Star game. No matter how much figure skating NBC puts on over the next few weeks, I still don’t care.
3. What a letdown for the Georgia basketball team against Auburn the other night. How can a team that has victories over 4 ranked opponents and took #2 Kentucky to the brink lose by 21 to Auburn? Mark Fox has made major strides with the program, but we still have a lot of work to do.
4. Tom Glavine officially retired and joined the Braves front office. I am glad to see Tommy put his anger from last year aside and come back to the Braves. Now, it’s the Atlanta fans’ turn to get off his back. It was an amazing career for Glavine, including 300 wins seen in the video below:

5. Football season is over. Congratulations to the Saints, but when the Falcons’ biggest rival wins the Super Bowl, I kind of get the same feeling as Florida winning the National Championship.

6. 4 weeks til spring practice. Let the talk about Grantham’s D, the quarterback competition, and whether Richt is on the hot seat (which he is NOT) commence.
Posted by Streit at 12:48 PM 4 comments:

While there have been many Olympians who spent years at the University of Georgia, none are as famous as the greatest football player in Georgia history, Herschel Walker. Herschel was amazing both on the football field and on the track during his years in Athens, but in 1992, Herschel would head to the Winter Olympics to compete in another sport: Bobsled. 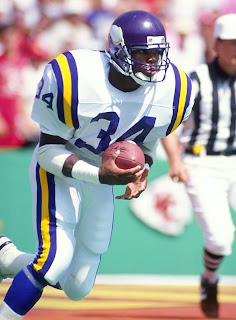 The United States Olympic Committee granted Herschel a late tryout following the completion of the 1991 NFL season. Herschel's team at the time, the Minnesota Vikings, missed the playoffs and Walker immediately went to try out for the US team. He made quite an impression on US Coach Jim Hickey, who was quoted as saying, "It takes a great athlete to be a pusher, combining speed and strength." But it was not just his physical abilities that allowed Herschel to make the team, it was also his effort and attitude. Hickey said, "He brought a desire to win. It was something he conveyed in meetings. The guys were very attentive to what he had to say."
Herschel was named the brakeman for the #1 sleds for both the 2 and 4 man bobsled teams. CBS ran this story leading up to the games. Just two days prior to the competition, Herschel was taken off the 4 man team at the request of driver Randy Will. Herschel had replaced Will's friend, Chris Coleman, on the team and despite being the better athlete, Coleman ultimately took Walker's spot. (More on this story can be found here.)
Despite the drama that surrounded Walker being replaced, he (along with partner Brian Shimer) finished seventh overall at the Albertville games. The four man team which he was removed from finished 9th.
As we have seen in recent days, Herschel continues to excel a many sports outside of the football field. When the Olympic Opening Ceremonies take place later this week, don't forget that one of Georgia's favorite sons made his mark there 18 years ago. 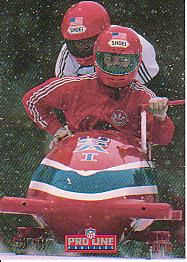 Where are they now? Blake Barnes is Playing Football ...in France?

Originally saw this mentioned over at Dawgsonline and I had to repost it here. Blake Barnes is now playing football in France (I didn't even know they played football in France.) While some of the players do get paid, they actually have to pay to join the team at first. Sounds kind of like my men's baseball league, except for the whole being in France thing. 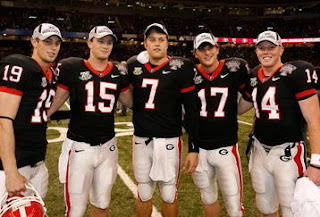 The 2008 Sugar Bowl was Barnes' (15) last game at Georgia before transferring.

Check out the CBS story here.
Posted by Streit at 2:17 PM 1 comment:

Labels: Blake Barnes, Where Are They Now

Hoops: The Other Star of the Georgia Basketball Team

Under Mark Fox, the Georgia Bulldogs men's basketball team has shown a great amount of progress the team has made under the first year coach. Despite the record, the team is much better than in year's past and is getting some attention from the media. Most of the attention is on Georgia's two stars, versatile big man Trey Thompkins and the high flying Travis Leslie. While watching Georgia upset #18 Vanderbilt on Saturday night, I noticed another player who really seemed to make an impact on the floor: senior guard Ricky McPhee. 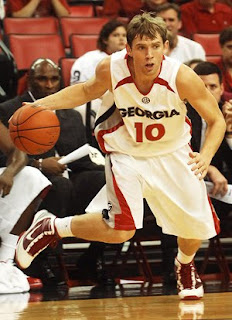 McPhee hails from Lilburn, Georgia where graduated from Parlview High School in 2005. Despite being 12th all time in Gwinnett County in scoring, the county all-time leader in 3 pointers, and finishing second in state in scoring his senior year, McPhee did not have a local basketball scholarship offer. This was mostly likely due to three other Gwinnett County players who graduated at the same time as McPhee who all accepted scholarships to Georgia: Dacula's Billy Humphrey and South Gwinnett's Louis Williams and Mike Mercer. In a twist of fate, McPhee is the only one of those three players that will end his college career at Georgia.
McPhee committed to play a Gardner-Webb, where he made an impact during first collegiate game. Ricky scored 21 points against national powerhouse North Carolina. He would play the next years at Gardner-Webb, averaging 8.9 points a game. He even scored 12 points against Georgia in a near upset of the Bulldogs (the final was Georgia 97, GW 96). McPhee then transferred to Georgia as a walk-on, where had to sit out the 2007-2008 season.
Once eligible to play, Ricky did not see the floor much during the first half of the 2008-2009 season. But once January came around, he gradually began to see his role increase. McPhee hit the game winning three pointer in a Georgia victory over Vanderbilt. A few weeks later, he scored a season high 15 points in a loss to Mississippi State. For the year, he averaged 11 minutes per game and hit 36% of his shots from 3 point range.
Under Mark Fox, McPhee has become a starter and one of the constants of the floor for the Dawgs. He has started all 21 games at guard and is averaging over 31 minutes per game. He is third on the team averaging 10.3 points per game, third in assists with 41, and leads the team in steals with 31. McPhee is one of the top deep threats in the SEC, hitting on nearly 41% from downtown (44 of 108). McPhee played a key role in Georgia's upset victory over #8 Tennessee, scoring 11 points. He also had a big game in Georgia's loss at Florida where he scored a season high 21 points on 8 of 11 shooting (5 for 8 from 3).
Ricky McPhee has been one of the true surprises on this year's Georgia team. It is a shame that he only got to spend two years on the court in Athens. "McThree" has certainly lived up to his nickname this season.
GO DAWGS!!!
Posted by Streit at 2:59 PM No comments: