With Alabama's victory over the Texas Longhorns in the BCS Championship last night, the 2009-2010 bowl season has come to an end. Congratulations are in hand for the winner of our bowl pick'em contest. The winner is the entry named campdawg by S.Kiser! As promised, you will be given a chance to write a guest spot here. I have contacted you separately.

Thanks for everyone who participated and I can't wait to do it again next year.
Posted by Bubba 'N Earl at 8:55 AM No comments:

Interesting Fact of the Day: Which SEC Coach was Drafted by the Atlanta Braves

In the thirteenth round of the 1982 Major League Baseball Amateur Draft, the Atlanta Braves selected a 6'2'' high school shortstop from Ohio. That player is none other than Florida Head Coach (or Coach in Waiting or Former Head Coach or Whatever) Urban Meyer. Meyer spent two years in the Braves farm system, compiling a whopping .182 batting average in 44 games. After failing to get out of the Gulf Coast League (Rookie Level), Meyer gave up his baseball career. 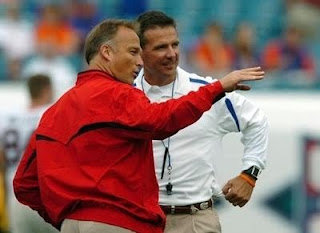 You can check out Meyer's stats here.
Posted by Streit at 9:24 AM 2 comments:

The SEC Goes for 4 in a Row 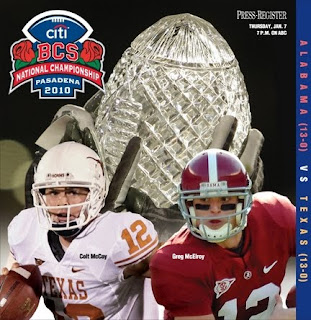 If Alabama can knock off Texas in the National Championship Game tomorrow night, it will mark the 4th consecutive BCS Championship for the Southeastern Conference. While the media likes to talk about the resurgence of the Big 10 this bowl season, the best football remains in the South. I personally think Bama is simply too complete of a team to lose this game. Much like Florida, the Texas offense relies too heavily on the quarterback to make plays. The absence of a running game and constant pressure from the Bama front will force McCoy to make a couple of bad decisions. The 'Horns will put up a good fight, but in the end, I think Bama will take home its seventh national championship.
Prediction: Alabama 24, Texas 17
Posted by Streit at 11:28 PM No comments:

Bubba 'N Earl is now officially part of the Internet

A year and a half and over 170,000 hits later, I thought it was time to officially plant Bubba 'N Earl's place in the interwebs. Today, we officially own the rights to http://www.bubbanearl.com/! You can now reach the site from both our old and new URLs. 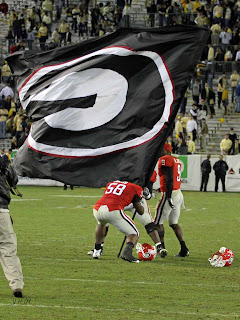 Just like the Dawgs own Georgia, we now own BubbaNEarl.com!

Labels: From the Desk of Bubba 'N Earl, I Own This, Interwebs

Reshad Jones will now throw punches in the NFL

As expected, redshirt junior safety Reshad Jones is leaving Athens early for the green pastures of the NFL. Since Jones almost left after the 2008 season, this comes as a surprise to exactly no one within the Bulldog Nation. After redshirting in 2006, the Dawg Nation was introduced to Jones during the season opener against Oklahoma State in 2007. Jones famously drew a fifteen yard personal foul penalty for punching an Oklahoma State player in the chest. The player (I can't remember who it was) went down like he had just been shot with a shotgun. The next three years were filled with ups (game securing interception in the victory over South Carolina in 2008) and downs (numerous missed tackles in the 2008 loss to Georgia Tech).

Jones coverage skills were decent and he tallied a fair share of interceptions, including this one handed pick in the victory over Georgia Tech this year:


Jones was known as a heavy hitter, a reputation that caused him to be a target of officials. This hit in the Oklahoma State game this season gave Jones the label of a head hunter (even though the hit was legal) and led to a number of bad calls against Georgia this year:


Jones leaves Athens after a successful career, though he never quite lived up to the 5 star talent he was evaluated as out of high school. We wish the best of luck to Reshad at the next level and hope to see him laying more hits like this one in the years to come: 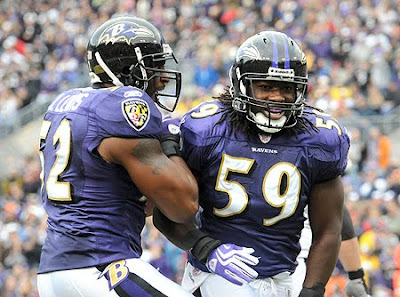 As we talked about back in August, former Georgia linebacker was impressing the Ravens staff and linebacker corp, especially since they signed him as a an undrafted free agent (he ended up being the only rookie free agent the Ravens signed).
On Sunday in his third start against the Raiders, Ellerbe got his first career interception just before halftime, and it resulted in a TD by Willis McGahee.
Ellerbe then recovered a fumble in Ravens territory.
Ravens Head Coach John Harbaugh said Ellerbe's performance was amazing and the difference in the game.
In a lockeroom interview for Sportscenter on ESPN, Ray Lewis also gave high praise to Ellerbe for his efforts.
This is fantastic for Ellerbe. It's always great to see a Dawg succeed, but it is especially sweet since Ellerbe was overlooked in the draft. Despite his history injuries, I was definitely surprised that he didn't at least get taken in one of the late rounds.
Good luck to Ellerbe and I hope his hard work continues to raise his status in the NFL.
DAMN GOOD DAWG.
Posted by BulldawgJosh at 5:20 PM No comments:

Continuing to look ahead, here are ten reasons why the Bulldog Nation should be looking forward to the fall of 2010.

As I have stated on many occasions, I did not enjoy having Bryan Evans as a starting safety for the Georgia defense. His complete lack of coverage and tackling skills made him a near waste of space on the field. When Rambo took the field in 2009, the defense seemed to improve. Can't wait for #18 to be in there a lot more next season.

For the last few years, we have been set forth with gauntlet like schedules while Florida and other schools have danced through cakewalk games. Next year, Georgia finally has a schedule that should allow for the development of young players early in the season and allow us to enter big games like Florida not exhausted and beat up. Our out of conference schedule includes Louisiana-Lafayette, Colorado, Idaho State, and Georgia Tech with Arkansas and Mississippi as our west opponents. This is a lot easier than last year when we had Oklahoma State, Arizona State, and LSU included in the schedule.

Once again, this season began with a constant shuffle on the o-line after Trinton Sturdivant got hurt. Late in the season, the line really gelled with Boling, Glenn, Jones, and the Davis boys. Aaron Murray (or whoever is QB) should hopefully have more time to make his reads this fall.

7. The Best Kicking Duo in America

Drew Butler won the Ray Guy Award as the nation's best punter and Blair Walsh was a finalist for the Groza. It doesn't get much better than that.

6. A New Man Under Center

Let's face it, Joe Cox did not perform like a fifth year senior this year. While he was fantastic at times, a fifth year senior quarterback should not throw 15 picks, particularly some of the ones he threw that directly led to scores for the other team (see the Kentucky game). Whether it is Murray, Mettenberger, Gray, or Mason, we will have a new leader at QB who we can get behind for the next few years. With a solid line, two great running backs, and a ton of receiving weapons, there should not be too much pressure placed on the new starter.

5. A New Philosophy on Kick Offs

With Fabris gone, hopefully we will abandon the directional kicking and let Walsh kick it deep. Despite still using directional kicks, Walsh lead the SEC in touchbacks this season. I expect him to do it again in 2010.

While he will only be a junior, we all know next fall will be AJ Green's last in Athens. The kid has way too much talent to pass up the first chance he gets at the NFL. Despite missing 3 games this fall, he seemed to single handily carry Georgia to victories this year. He is the most talented wideout Georgia has ever had and I plan to enjoy every minute he is on the field next fall.

3. The Dynamic Duo: King and Ealey

Caleb King and Washaun Ealey proved down the stretch why they were both highly recruited players out of high school. Georgia's offense average over 200 yards a game running in the second half of the season and I expect the success to continue next year. Remember how great a duo Thomas Brown and Knowshon Moreno were in 2007? I think these guys can be even better.

In addition to King and Ealey, Georgia will have an insane amount of offensive firepower at their disposal next fall. They have two of the best offensive tight ends in the SEC in Aron White and Orson Charles and a receiving corp that includes AJ Green, Tavarres King, Rontavious Wooten, Marlon Brown, a returning Kris Durham, and incoming freshman Da'Rick Rogers. Add in the fastest man on the team, Branden Smith, and the possibilities are endless. Georgia returns a total of 10 of 11 starters on offense.

1. The Return of the Defense

We all have wanted it and now Willie Martinez is finally gone. While Coach Richt is still searching for the right man for the job, we can be clear that the Georgia defense will have a new look in 2010. Soft zones and four man rushes are hopefully a thing of the past. I want the return of the junkyard dawg defense.