91
Yards on the first touchdown drive for Georgia in a 27-10 victory over Arizona State in 2008. The drive was capped off by a leaping 9-yard touchdown run by Knowshon Moreno.
Posted by Streit at 5:00 AM 1 comment:

The Career of Alex Fernandez

Why would BNE highlight the professional baseball career of Alex Fernandez? Well, he is the last Chicago White Sox prospect to be called up to the major leagues as early as Gordon Beckham. The White Sox drafted Fernandez, a pitcher, 4th overall in the 1st round of the 1990 Major League Baseball draft. He made his debut August 2, 1990. 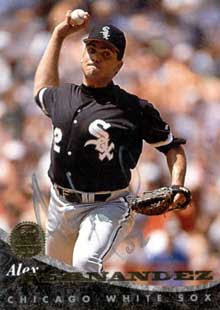 It's hard to compare a pitcher's career to a future everyday player like Beckham, but Fernandez's 10-year Major League career was good while it lasted. He posted 107 wins against 87 losses with a career ERA of 3.74, pitching for the White Sox from 1990 to 1996 and then for the Marlins from 1997 to 2000. Unfortunately, the University of Miami product was out of baseball by the age of 30 after never recovering from a shoulder injury that surfaced during the 1997 playoffs. At 39, Fernandez is currently a pitching coach at Archbishop McCarthy High School in Cooper City, Florida. 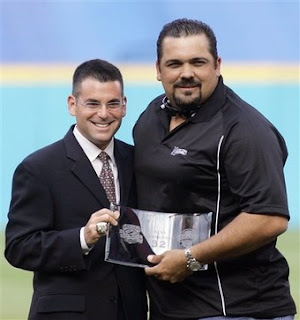 While Fernandez's career might've been cut short at the age of 30, many people would kill for the chance to play 10 years in the big leagues, especially producing good numbers like Fernandez.
Here's to Gordon Beckham's career lasting at least 10 years and producing very good numbers, if not great. It took the White Sox 18 draft classes to call up another rookie prospect so fast. The White Sox were right to do so back in 1990, let's hope they're right again in 2009.
One things for certain, it will be interesting to watch manager Ozzie Guillen's response to Beckham's year in Chicago. Being a former shortstop (Beckham's starting at third base) and rookie of the year (1985) himself, and just plain outspoken, Guillen should have some choice words on the situation, good and bad.
Posted by Earl at 6:00 AM No comments: 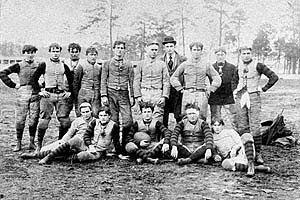 In 1892, the first year in which the University of Georgia fielded a football squad.
Posted by Streit at 5:00 AM No comments:

Welcome to the bigs Gordon, that was quick. This reminds me of a great story from the trip to Tempe, Arizona last fall when some of the BNE crew ran into Beckham at Fat Tuesday's in the Mill Avenue district (yes, Fat Tuesday's still had beer, just not on tap). To show their appreciation of the Diamond Dawgs run last summer, many Georgia fans were offering to buy Beckham a drink...And then one astute Georgia fan yelled out "wait, shouldn't you be buying everyone else drinks with that signing bonus..."

Beckham claimed that he hadn't seen the check from the White Sox yet...

Think he can afford it now? 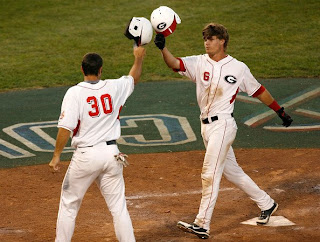 Congrats on realizing a dream Gordon. Do the Bulldawg Nation proud in Chicago. We look forward to following your progress on your White Sox blog.
Posted by Earl at 1:52 PM 2 comments:

Yards gained on the touchdown pass from Buck Belue to Lindsay Scott to beat Florida in 1980.

Here is the footage of that amazing play: 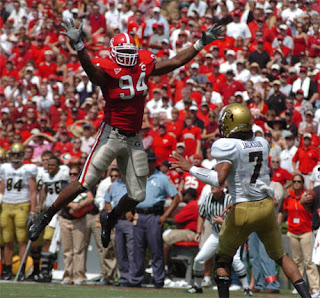 Jersey number of former defensive end Quentin Moses, who had 25 career sacks for the Dawgs from 2003-2006.
Posted by Streit at 5:00 AM No comments:

Georgia had a number of players miss significant time or the entire year during the 2008 campaign. The first of those players we will be spotlighting is senior middle linebacker, Marcus Washington. 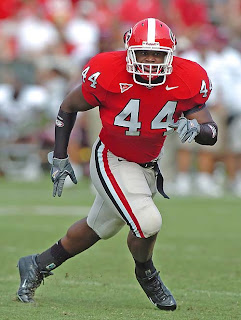 Georgia's linebacking crew for the 2009 season appears to be one of the deepest groups that the team has ever had. With Rennie Curran, Daryll Gamble, Akeem Dent, Darius Dewberry, and Akeem Hebron all coming back, the linebackers hope to return Georgia's D to the form it showed during the 2007 season. One of the pieces that should help return to the '07 form is the man who played the key role in solidifying the defense two years ago.

When Washington went down with a shoulder injury during the spring of 2008, I had a bad feeling he would be out for the season. There were rumors that he would be back for Alabama, and then it was LSU, but by the time the season rolled around, we all knew he was gone for the year.

Before the 2007 season, Washington's three years in Athens had seen him make minimal contributions on the field while spending a large amount of time in the trainer's room. But following spring practice, Washington was named Most Improved Linebacker and proved he was force to be reckoned with that fall. While still battling injuries, Washington became a stabilizing force in the middle of the Georgia defense. He made his first career start in the overtime victory at Alabama, recording a career high 8 tackles and a sack. After missing the Tennessee and Vanderbilt games, he came back to make six tackles (including a sack) in the upset victory over Florida in Jacksonville. Georgia finished the season strong and Washington finished with a career high 40 tackles on the season. 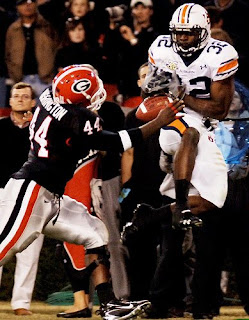 The outlook for 2009 is bright, as Marcus Washington returns to solidify an experienced Georgia linebacking corp. Expect Washington to play extensively off the bench, particularly in situations where Georgia sends linebackers on blitzes. Washington and Gamble both took snaps at rushing DE in spring and I expect coach Martinez to use this formation early in the season with Justin Houston out. Washington is an extremely good tackler and he should help remedy some of the tackling issues that plagued the D in '08.

The Dawg Nation welcomes a Damn Good Dawg, Marcus Washington, back for his senior season!
Posted by Streit at 1:14 PM No comments:

The guys over at CollegeFootballNews.com have an interesting Tuesday roundtable today...which program is getting no attention today, but will by the end of September?

Two votes for UGA (Pete Fiutak/CFN and Hunter Ansley/DraftZoo.com) and a picture of Rennie Curran says the roundtable likes the Dawgs. 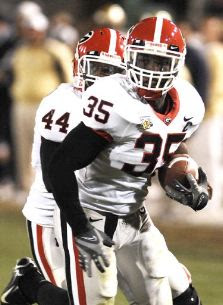 Proving that BNE can post a picture of Rennie Curran too...with the ball...take that CFN

Fiutak: Am I too much of a wuss if I take Georgia? I have a gnawing feeling that Mark Richt has the type of team good enough to hold Oklahoma State in check in the season opener, beat South Carolina, Arkansas and Arizona State to be a strong 4-0 at the end of September and be ranked fifth in the nation going into the LSU showdown.

Ansley: ...But the team that will be back in the national spotlight after losing three major offensive stars to the NFL is Georgia. Somehow this team gets overlooked every time they lose a few players to the next level. When David Greene left Athens, no one expected DJ Shockley to lead them to the SEC title, but he did. There weren’t huge expectations in 2007 when the Dawgs found their way to a Sugar Bowl blowout. And here we are again, with Georgia likely to find a home in the middle to lower half of the first preseason polls. But a solid season shouldn’t be surprising. Georgia always seems to thrive when they fly under the radar. This is a team that has won 10 or more games in six of the last seven seasons.

Richard Cirminiello of CFN likes Arkansas in September and I can't say that I disagree with him. I think Bobby Petrino will find success in Fayetteville and that usually begins in the second year for good college coaches. Of course, Georgia travels there on September 19 after tough games against Oklahoma State and South Carolina, while Arkansas is coming off a bye week after opening with a cupcake. In other words, Arkansas is preparing for Georgia right now. 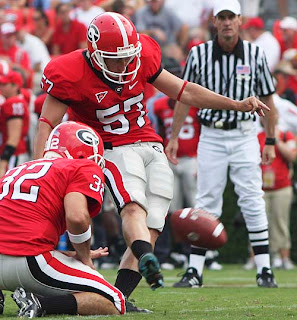 Congratulations to the Southern Miss Golden Eagles baseball team for defeating the Nats at Russ Chandler Stadium on the Flats. Danny Hall's teams continue to have the market cornered on shattered dreams.

Southern Miss will now face the Gators in Gainesville in the Super Regionals best-of-three series this weekend.

Here's to Southern Miss knocking off Greggy and Georgey and the rest of the other Hitler youth in Gatorland.

For a school with a rich history of upsetting SEC football teams, let's hope it translates to baseball. The Golden Eagles are a team I could pull for in Omaha.
Posted by Earl at 10:41 PM No comments:

Didn't Even Have to Use His AK, Today was a Good Day

Florida CB Janoris Jenkins was arrested over the weekend in Gainesville for his involvement in a street fight. While police used a Taser to subdue Janoris because he apparently wouldn't stop fighting (according to police reports), this isn't the same type of offense we are used to coming out of Gainesville over the past few years.


Gainesville police are pros with the Taser. Don't Tase Me Bro!

Hey, at least Janoris didn't have to use his AK.

So, all in all, today was a good day for Janoris.

Thank goodness for Urban Meyer that Florida opens the season with Charleston Southern because if they were playing, say, Miami to open the season, Meyer might've had to wait until the second game of the season to play out Janoris' suspension.
Posted by Earl at 5:26 PM No comments:


As in the year of the first Georgia football squad to win a conference championship (1896). Georgia won the SIAA which was the the first collegiate athletic conference formed in the United States. 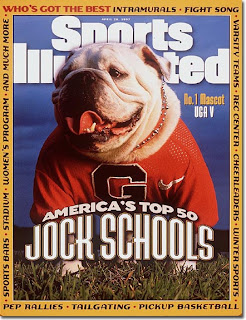 UGA V graced the cover of Sports Illustrated's "America's Top 50 Jock Schools" issue.
Posted by Streit at 5:00 AM No comments: