It All Started 117 Years Ago

Today marks the 117th Anniversary of the first football game for the University of Georgia. On January 30, 1892, Georgia played Mercer University at Herty Field on North Campus. Georgia would defeat Mercer 50-0 and would begin its winning tradition. Three weeks later, the team would head to Piedmont Park in Atlanta to take on Auburn and the Deep South's Oldest Rivalry was born. The University of Georgia Football Team, circa 1892

I've been on a huge 80's Movie kick lately and have been trying to drop the habit by listening to various 80's movie theme songs. It's really not working and HBO continues to keep my evenings unproductive as both Fletch and Top Gun have been on within the past week. I'm sure when I get home from work Ghostbusters or Caddyshack will be on and neither movie will end before Earl and I leave to meet Streit for Trivia. The point of watching these movies on TV is entirely moot because I own them all on DVD.

To feed your inner 80's movie urge I give you Ray Parker, Jr. and the 1984 theme song "Ghosbusters" from the movie of the same name (pretty obvious):

If this is not enough for you, here is an encore presentation of "Axel F" from Harold Faltermeyer and the 1984 classic film Beverly Hills Cop:

Former Diamond Dawgs in the Pros in 2009

Major League pitchers and catchers report in just two weeks and there are a number of former Georgia Bulldogs who will be continuing their baseball careers in the pros in 2009. Here is a look at some of those players who will be playing in the minors and the majors this year: 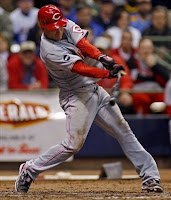 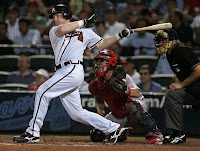 Clint Sammons, C – Braves
- Was a late season call up with the Braves in 2008
- Hit only .148 with 1 homerun and 4 RBIs in 23 games
- Is listed as part of the Braves 40-man roster heading into Spring Training
- Expected to head back to the minors after the Braves signed veteran catcher David Ross to back up Brian McCann 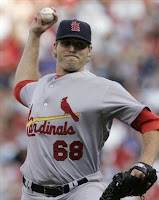 Mitchell Boggs, P – Cardinals
- Went 3-2 with 7.41 ERA in 8 games with St. Louis in 2008 (including 6 starts)
- Will head to spring training as a part of the Cardinals active roster
- Expected to compete for a bullpen spot with the Cardinals during Spring Training

Gordon Beckham, SS – White Sox
- After being drafted #8 overall by the White Sox, hit .310 with 3 homeruns and 8 RBIs in 14 games for the Kannapolis Intimidators (Class A)
- Participated in the Arizona Fall League with the Peoria Saguaros, hitting .394 with 3 homeruns and 18 RBIs in 18 games (66 At Bats)
- Has been invited to Spring Training with the Chicago White Sox as a Non-Roster invitee and is expected to be in the majors in the next two years.

- Was selected #20 overall by the Mariners in the 2008 draft
- Never reached an agreement with the Mariners during the 2008 season
- Contract negotiations between the club and Fields’s agent, Scott Boras, are ongoing 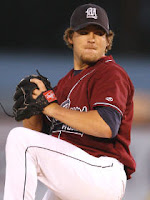 - Was named the organizations number 2 overall prospect before struggling in 2008
- Went 6-15 with a 4.18 ERA in 26 starts for Class AA Mobile Bay Bears
- Participated in the Arizona Fall League, going 2-3 with a 5.61 ERA for the Phoenix Desert Dogs - Hopes to regain control and command of his pitches in 2009 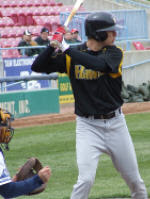 Joey Side, OF – Diamondbacks 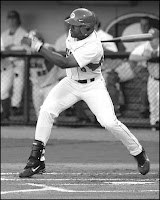 - Split time between two Class A clubs in the Cubs organization in 2008
- Played for Daytona Cubs and is currently listed on the roster of the Peoria Chiefs
- Hit .256 in 426 at bats between the two teams, including 6 homeruns, 41 RBIs, 18 stolen bases, and 65 runs scored in 116 games 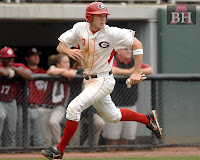 There are a number of other Dawgs scattered around the minors as well. If anyone knows what happened to Will Startup or Josh Morris, please let me know.

Aaron Murray is my new hero

After reading these quotes from an interview Aaron Murray did with David Hale, about why he chose Georgia over schools in Florida, how can you not like this guy already?

"It was huge just because the perception is that if you're in Florida, you're going to go to one of those three schools Miami, Florida or Florida State. It wasn't tough for me because I knew where I wanted to go, but for the people down there, everyone's a Florida fan, so they were all like, 'You need to go to Florida, blah, blah, blah, this and that.' In the end, I was going to go where I felt more comfortable. I fell in love with Georgia." 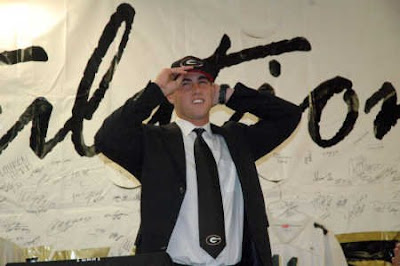 The game against Florida should be a lot of fun over the next few years. Do you think Florida fans will hate him as much as they love Tebow?

This came out a few days ago, but I guess I missed it. After 4 years, former Georgia quarterback David Greene has retired from the NFL. Greene was quarterback of the Dawgs for four out of the five years I was in Athens. Greene was named the 2002 SEC offensive player of the year in leading the Bulldogs to a 13-1 record and a Sugar Bowl victory. He left Georgia as the NCAA's all-time winningest quarterback with 42 wins and is the holder of numerous Georgia passing records including:
- Attempts: 1440
- Completions: 849
- Passing Yards: 11,528 (also an SEC record)
- Touchdown Passes: 72
- Consecutive Passes without Interception: 214
- Lowest Interception Percentage: 2.22% (also an SEC record)
Other highlights include:
- 4-0 record against Georgia Tech
- Victory over Florida in 2004, breaking a 6 game losing streak
- 3-1 record in bowl games (3-0 in New Year's Day Bowl Games)
- 2002 SEC Championship MVP
- 3-1 record against Tennessee, including this amazing victory in 2001
After being drafted by Seattle Seahawks, he bounced around to a number of NFL teams before calling it quits, having never taken a snap in a regular season game. As the guys on this blog know, David was a high school classmate of mine and it was a lot of fun watching him play for seven years. I will never forget my final Georgia game as a student against Georgia Tech in 2004. Greene came off the bench (after breaking his hand earlier in the game) in the fourth quarter to lead the Dawgs to a field goal and hold on for the victory over the Jackets. It may have been one of the coldest games I have ever been to (it was also pouring rain), but I would go back to that game again in a heartbeat. 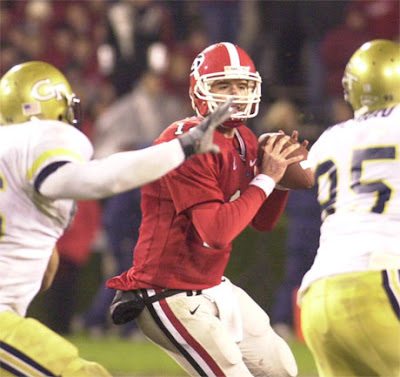 Labels: David Greene, NATS, Where Are They Now

When Asher Allen announced his intentions to leave Georgia early for the NFL draft, a major hole was left at the cornerback position. One of the contenders to replace Allen will be true freshman Branden Smith. 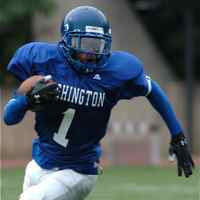 Smith is an extremely athletic corner who checks in with good size (5'11'') and lightning fast speed (clocked 4.28 in the 40). He has been rated a five star recruit by both Rivals and Scout and is considered to be one of the top 30 prospects in the entire nation. As a junior in high school, his 10.62 time in the 100 meter run earned him the nickname, "The Fastest Man in Atlanta".

While Smith is expected to play corner at Georgia, he played both sides of the ball during his senior year and also provided electricity in the return game. As a wide receiver, Smith had 32 catches for 1,085 yards. That is an insane 33.9 yards per reception, which is a testament to his speed. At his primary position of corner, he tallied 50 tackles, 1 sack, 2 interceptions, and 2 fumble recoveries. He also added 5 touchdown returns on special teams.

Smith's speed should allow him to fit comfortably into the Georgia defensive backfield. He will need to add strength and weight to help jam some of the larger receivers that he will see in the SEC. I expect Smith to see ample playing time for the Dawgs in 2009 and most likely be a starter by the end of the season (much like Rennie Curran two years ago.) I really like this kid and I forgot to mention that he chose the Dawgs on national TV over the Gators: