#7 - Gurley Being the Best Back in America

After an amazing freshman season, Georgia fans were anxious to see what Todd Gurley could do on the national stage on opening night against Clemson. It took Gurley only one carry to show the nation why he is the best tailback in the game today:


Unfortunately, the country was deprived of seeing a healthy Gurley perform for much of the 2013 season. An ankle injury against LSU held him out for a few games, but after returning against Florida, he showed why a little Gurley is better than a lot of almost everyone else:

The early season battle with the Bayou Bengals was marked by amazing quarterback performances from Zach Mettenberger and Aaron Murray. The two sides trading punch after punch and LSU finally took the lead in the fourth quarter. Murray rallied the Dawgs quickly down the field and Justin Scott-Wesley found an opening in the LSU secondary:

The Vanderbilt loss was ugly. Without many weapons on offense, the team could not find a way to sustain drives and put up points. While the Dawgs would ultimately lose the contest, they were able to lead for much of the game thanks to the play of freshman corner Shaq Wiggins. Trying to catch the Georgia defense off guard, Vanderbilt came out in a strange formation with most of its linemen off the ball. The quarterback tried to make a quick read to his wide receiver, but Wiggins was not fooled. This play marked Georgia's only defensive touchdown of the season:

One of my favorite plays of the last five years was watching Branden Smith take a pitch for a long touchdown against South Carolina in 2009. It was amazing to watch him absolutely burn everyone on the field. In years since, there have been a number of fast players at Georgia but I have not seen a player absolutely torch all of the defenders like Smith did...until the Dawgs took on South Carolina in Athens in week 2. With the Dawgs leading by 4 and facing a third and 13 at their own 15, Murray scrambled away from pressure and found Justin Scott-Wesley wide open around the 45. The Carolina DB was in full stride and should have caught up easily, but Scott-Wesley kicked in another gear and left him in the dust. This pushed the Dawg lead to 11 and helped secure the first win over South Carolina since 2009:

Continuing our look back at the plays that made the 2013 season special, today I present numbers 10 through 8.

Coming into the final game of the season, Georgia Tech had scored a touchdown every single time it had a first and goal situation during the 2013 season.  The announcers let the viewing audience know this on multiple occasions and earlier in the game, the Dawgs forced a Tech field goal to break this streak.  In the second overtime, the Dawgs had taken their first lead of the game on a 25 yard TD run by Todd Gurley and were now attempting to become the first team to prevent Tech from scoring at all when starting first and goal.  Tech was once again just outside the Georgia end zone with a 3rd and 2 from the Georgia three.  Tech ran a sweep to Godhigh, but Leonard Floyd was there to blow it up. The Dawgs learned from past mistakes and batted the next play down, escaping Atlanta with a 41-34 victory. 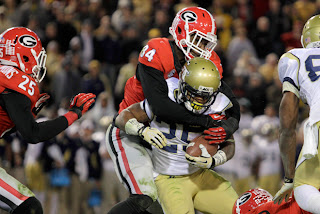 #9 - Gurley becomes Superman, Twice
Knowshon Moreno was known for those "wow" moments.  From the leap against Arizona State to the hurdle against Central Michigan, he had a certain flair for the dramatic. Todd Gurley, on the other hand, has mostly been all about business in his first two seasons.  But late in the year, Gurley would turn two short passes into fantastic, highlight real moments, saying to Knowshon Moreno, "Anything you can do, I can do better...twice."

The first came on a pass from Aaron Murray with the Dawgs already leading Kentucky 7-0:


The second came the next week on another pass, this time from Hutson Mason, that would end the Tech shutout and help get the Bulldogs comeback going:

The 2013 Tennessee game will always be remembered as the game that changed our season.  The Dawgs were dominant early but then the injuries began happening and things went bad in a hurry.  Tennessee had come back to tie the game at 17 in the waning seconds of the third quarter, when Aaron Murray took matters into his own hands.  On a perfectly called QB draw, Murray was able to run past a few Vol defenders and was finally dragged down inside the ten after going for a career long run of 57 yards:

Posted by Streit at 8:33 PM No comments:

2013 Plays of the Year – Honorable Mention

Ahead of Georgia’s bowl matchup with Nebraska (again?!?), I thought I would take a look back at the 2013 season and the plays that will no doubt be on Georgia fans until kickoff next fall.  Over the next few days, I’ll present my list of the top plays of the year.  Today, I’ll begin with a couple of honorable mention honorees.

The only way I can describe the North Texas game is ugly.  It was raining, the Dawgs made too many mistakes, and they let a crappy opponent hang around until the second half.  That being said, there was one play that can only be described as perfect.  With the Dawgs leading 7-0 to open the second quarter, North Texas pinned Georgia at their own 2 yard line.  Freshman receiver Reggie Davis, he of 0 career catches at this point, lined up wide at the top.  Georgia ran play action and Murray, seeing Davis in one on one coverage down the field, let the ball fly.  The speedy Davis easily blew past his defender and caught Murray’s pass in stride at the 42.  No one would catch him.  The result was a 98 yard touchdown, the longest in Georgia history (it also happened to be the 100th touchdown pass of Aaron Murray’s career).

Freshman running back Brendan Douglas was just a name buried on the depth chart for most Georgia fans entering the 2013 season.  A longtime Georgia Tech commit, Douglas switched to Georgia after a late offer came in when Alvin Kamara decided to become the ninth running back on Alabama’s depth chart.  But when Keith Marshall was hurting in the second half of the South Carolina game (before THE injury against Tennessee) and Todd Gurley winded from already carrying the ball 30 times, Douglas was called on to help grind out a final drive to bury the Gamecocks.  Douglas responded:

A few weeks later, Douglas once again decided to run over a bunch of opponents, this time it was the Gators:


Honorable Mention – Arthur Lynch Does his Best Knowshon vs. Missouri

If Georgia would have come back to beat Missouri, this one may have been higher.  But because the drive ended with a fumble, it is somewhat forgotten.  Artie Lynch is a big man and watching him hurdle a Missouri defender was impressive.  I think Knowshon would be proud. (got to the 58:40 mark)

Posted by Streit at 9:21 PM No comments:

But I'm finally coming back.  Over the coming months, look for a couple of features:

He Will Break You 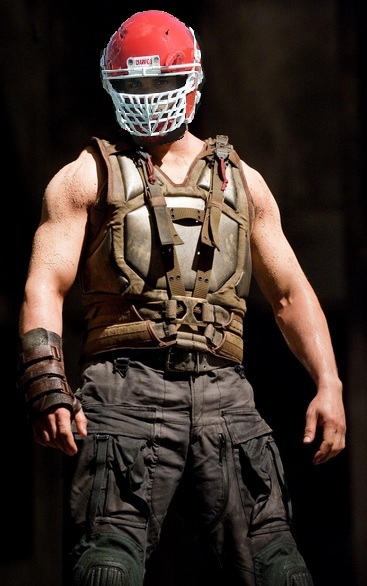 During my freshman year at the University of Georgia, the Bulldogs failed to meet very high pre-season expectations and finished the season with a third consecutive loss to Georgia Tech and a 7-4 record.  The decision was made by University President Michael Adams to relieve coach Jim Donnan of his coaching duties and the next few weeks (leading up to Georgia's victory in the Oahu Bowl) were filled with rumors of who the new coach would be.  Ultimately, the job went to Florida State offensive coordinator Mark Richt and the rest is history.  But there was another candidate for the job and I got a chance this weekend to hear exactly how it all went down.

I attended my step brother's wedding in Norcross on Saturday night.  I knew that his fiance's father was a big time booster for the Southern Miss football program and was friends with a number of current and former members of the athletic association.  One of those friends who happened to be at the wedding on Saturday was long-time head coach Jeff Bower.  My father, knowing my love for college football, insisted on myself and my brother in law in meeting Coach Bower.  In talking with him, he gave me an interesting story about the coaching hire by the Dawgs in 2000.

First, a little bit about Coach Bower.  Jeff Bower grew up in Roswell and was a star athlete for Roswell High School.  As quarterback, he led them to back to back state championships and was named a prep All American.  He committed to play college football for Coach Vince Dooley at Georgia and was on the squad in the fall of 1973.  He ultimately left Athens for Southern Miss, where he became a three year starter.  He began his coaching career at Southern Miss as a graduate assistant in 1975 and after serving as offensive coordinator for Oklahoma State in 1989, he was named Southern Miss's head coach in 1990.  During his first years with Southern Miss as head coach, he coached future NFL legend Brett Favre.  By the time he was fired after the 2007 season (in what I think was one of the dumbest coaching moves I have seen in college football in recent years) he had compiled a 119-83 record including a 6-5 bowl record.

Back to December 2000.  Georgia is just beginning its coaching search and Mark Richt is on the list for many open positions.  Having just finished his 11th season at Southern Miss with a win in the Mobile Bowl, contacts the man who recruited him to Georgia back in 1973.  Vince Dooley begins conversations with Bower about coming in for an interview for the Georgia job.  Coach Bower told me that this was the only time during his 29 years he spent coaching in some capacity at Southern Miss that he ever actively applied for another job.  He was excited about the chance to return to his home state and coach at the school where he began his college career.  After some initial talks, Coach Dooley set up an interview for Bower in Athens for the day after Christmas.  Bower was going to be home for the holidays, so it set up perfectly for him.  But a phone call on Christmas Eve would put an end to those dreams.

The phone call came in and it was Vince Dooley on the other side.  The long and the short of it was that the University had decided to go ahead and make a decision to hire Mark Richt as the next football coach at Georgia.  Dooley stressed to Bower that decision to go ahead and make the offer to Richt was made by the University President (Adams) and he was very sorry to break the bad news.  Richt was atop of number of candidate lists, including Missouri, and they did not want to miss out on him.  So Jeff Bower never got a chance to interview in person for the University of Georgia job.

History tells us that the decision to hire Mark Richt was the right one.  Two SEC championships, an 8-4 bowl record, and multiple 10 finishes speak for themselves.  But what if Bower would have at least gotten that interview?  For Jeff Bower, this was a dream never realized but an opportunity that he surely will never forget.
Posted by Streit at 12:58 PM 6 comments: