Random Thoughts from the Columbus Airport

I am stuck at the airport in Columbus, Ohio waiting for my flight home. Here are some thoughts on what has been going on lately:

- G-Day is on the Saturday of The Masters - Throw in the fact that I don't think the game will be on ESPN this year, and we should be back to the normal G-Day crowd of around 5,000.

- Who will be the final coaching hire? - I would still love to bring Travis Jones from the Saints to coach the line but I don't that is going to happen. If we can't get Jones, I would rather get a special teams coach. Grantham, Gardner, and Lakatos will be fine with the defense.

- Da'Rick Rodgers taking his visit to Tennessee - If he switched to UT, I guess it would be fair since we stole Marlon Brown from them on Signing Day last year. But, I really hope Da'Rick is in Athens next fall.

- Signing day is just a couple of weeks away. Barring any major changes, Georgia should end up with around the 10th ranked class in the country. Pretty good considering it is a smaller class and we had a pretty young team last season. The mass exodus leaving Florida with Tebow caused a lot of players to pick the Gators. I've got a feeling a fair number will be transferring after the 2010 season.

- Chan Gailey gets hired by Buffalo - You think Chan can get Reggie Ball to try out for QB? I guess the Bills figured since Georgia is not in the AFC East, Gailey should do alright.

- Despite losing all three games, the Georgia basketball team had 3 of the top 4 teams in the SEC on the ropes to start the SEC schedule. I really wish they could have held on against Mississippi State last Saturday, but clearly they are much better coached team under Mark Fox. Travis Leslie is going to be a big name in a couple of years.
Posted by Streit at 6:41 PM 4 comments:

Let's Get to Know: Jakar Hamilton 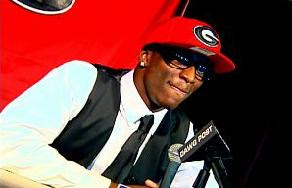 With the start of spring classes in Athens, Georgia officially welcomed two new members of the Bulldog nation. Offensive lineman Kolton Houston and junior college safety Jakar Hamilton enrolled early and will be with the Dawgs when they begin spring practice in March. Houston will be a true freshman and with a veteran line returning in '10, is most likely headed for a redshirt season. Hamilton on the other hand is expected to compete for one of the open safety positions left by the graduation of Bryan Evans and the decision by Reshad Jones to leave early for the NFL.
Hamilton will be starting his SEC career two years later than oiginally planned. Hamilton originally committed to the University of South Carolina as part of the class of 2007 following a stellar career at Strom Thurmond High School (Johnston, SC). During high school, Hamilton played defense and offense, where he was a scoring machine during his junior season in 2005 scoring 20 touchdowns. He led his team to the state championship that year, but missed most of his senior year to injury. Academic issues ultimately led Hamilton away from South Carolina. He spent the following two seasons at Georgia Military College, where he quickly became a Junior College All-American. During his two seasons at GMC, Hamilton totaled 88 tackles and 6 interceptions playing primarily safety.
Jakar comes to Athens after choosing Georgia over Alabama, making his announcement at the Wild Wing Cafe in Augusta. (You can watch the video here.) Hamilton will have two years of eligibility left to display his talents. He is described as a physical safety who excels in run support and is known for making big tackles. The only knock on Hamilton appears to be his coverage skills, so hopefully new DB coach Scott Lakatos can help him improve in that area. 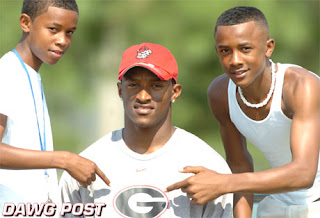 Hamilton wore #10 during his playing days at GMC. Hopefully he can live up to the last Dawg that wore #10 at safety, Thomas Davis. 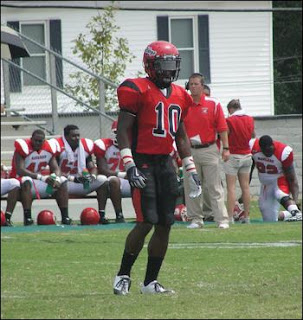 The Jets in the AFC Championship: A Strike Against Playoffs in College Football

The New York Jets defeated the San Diego Chargers on Sunday to advance to the AFC Championship game against the Indianapolis Colts next week. The most interesting part of the Jets run in the playoffs has been that it almost did not happen. Following a week 15 loss to the Falcons, the Jets were on the outside looking in. With games left against an undefeated Colts team and a division leading Bengals, the playoff chances for the Jets looked grim. In college football, two tough games left on the schedule would almost certainly mean losses for the Jets. But this is the NFL, and unlike college football, playoffs allow teams to rest players when their playoff seats are already decided.

Over the next two weeks, the Jets took advantage of both the Colts and Bengals taking it easy in preparation for the playoffs. They won both games and made the playoffs as the final team in. On Wild Card weekend, they had a rematch against the Bengals who had taken it easy on them the week before. The Jets won easily and after beating San Diego, will now get another shot at the Colts next week. Wouldn't it be funny if the team that the Colts and Bengals went easy on (allowing them to make the playoffs) ultimately knock both of them off?

Now the question ultimately arises, if there were playoffs in college football, would teams rest players late in the season much like the Colts and Saints did this year? If a team knew that they had a playoff game the next week, would they be willing to lose a season finale (most likely against a rival) to rest players?

I know the immediate reaction is to say no. Of course Georgia would not rest players against Georgia Tech. But take a minute and think about basketball. Georgia plays Georgia Tech every year and ultimately the game means very little to the season as whole. If Georgia had already clinched a spot in the SEC Championship and knew they would have a playoff game the week after, would they risk losing the Tech game to give their players a chance to get healthy before two games that really meant something?

I am personally torn on this subject. I would love to see a playoff but I also think it would take away from the regular season.

Leave your thoughts in the comments.

*Thanks go out to Evan and Earl for stirring up this conversation over email today.
Posted by Streit at 12:10 PM 10 comments: