This is the coach of the team we play next week

At one point, we all fall 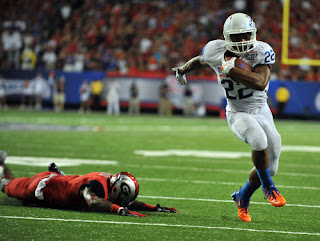 Image courtesy of the AJC
"Every man at some point in his life is going to lose a battle. He is going to fight and he is going to lose. But what makes him a man is at the midst of that battle he does not lose himself. This game is not over, this battle is not over." - Coach Taylor, Friday Night Lights
I find this quote amazingly appropriate for the game this weekend. The irony is it appeared on the television screen spoken by Kyle Chandler, who attended the University of Georgia before becoming an actor.

- The special on Herschel Walker on ESPN last night was pretty awesome. I had never heard the story about his difficulties with bullying in middle school and how he chose to transform himself. Pretty moving stuff. And watching the highlights again, I can honestly say there has never been another running back since Herschel that had the combination of speed and strength he had. The dude was just amazing.

- Everyone is frustrated. The fans, the players, the media, and Mark Richt. Coach Richt asked the reporters if they wanted to see him blow up and start throwing things. My first response was, hell yes.

- The Dawgs will be an underdog at home this weekend. That is a very rare occurrence (I believe I read this is only the 3rd or 4th time since 2000). That is pretty amazing.

- Going into last year, Mark Richt had only lost 4 non-conference games in his first 9 seasons at Georgia. He has now lost 3 of his last 6. That's not good.

- South Carolina is a good football team, but they are not unbeatable. East Carolina had them on the ropes last week. If the Dawgs can find a way to keep the score low, I think we win. My god, a man can hope.

- I predicted a loss last week with the caveat that we would win this week. Despite the poor performance against Boise State, my feelings remain the same.

That's how I feel about Saturday's game. All this talk about renewed focus and better conditioning resulted in 35 Boise State points and exactly zero chance of winning the game. Even Brandon Boykin's amazing 80 yard run looks kind of bad since Boykin was dehydrated and had to miss plays afterwards. The defense was actually playing very well despite being on their side of the field the whole first half...until the last five minutes of the second quarter. And that was the turning point.

Boise State scored just before half to go up 7 and then immediately put 7 more on the board to start the second half. At that point, you knew the defense could not stop them anymore. The offense certainly did them now favors.

Why the hell was Bobo trying to have us run the spread??? We are not a spread offense. Running out of the shotgun on third and 1 at the Boise 25 was about the worst play call I have seen in my 12 plus years as a Dawg fan. If we would have scored there (even the damn chip shot field goal) I honestly feel the game is much closer.

Crowell will be good, if we ever give him some blocks. The kid can't do it all himself. "Tampa" Mitchell is scary fast and, in my opinion, should be starting next week. (It won't happen)

Jarvis Jones = bad ass. It is really going to suck not having Ogletree for the next 6 weeks.

Overall, a great day of tailgating was ruined by a piss poor effort. I have been positive in the face of the lunatics, but maybe it is just time for Coach Richt to move on. I did predict a loss, but not a domination in the veins of Alabama 2008. I love my Dawgs and I pray we get it together this weekend against Cackalacky.
Posted by Streit at 11:20 AM 3 comments: