84
Career touchdown passes for freshman quarterback Aaron Murray during high school. After returning from a broken leg to lead Plant High School to a Florida state championship in 2008, Murray enrolled early at Georgia in the spring of 2009. In the video below, Murray discusses why he chose Georgia over in state school Florida (who wanted him BAD.)

The Alabama Crimson Tide are going to be forced to vacate wins for its football program from 2005-2007. This includes the first season under current head coach Nick Saban. The allegations include football players getting free text books for other students. Included in the list of players were former Alabama stars Antoine Cladwell and Glen Coffee. While being forced to vacate victories from the Mike Shula era is no big deal, I'm sure Saban is furious about losing victories from the 2007 season.

Saban's first squad dropped their final 4 games of the regular season before winning their bowl game to finish with a record of 7-6. That included an embarrassing loss to Louisiana-Monroe. 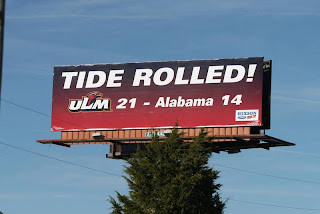 As Bubba says, this picture never gets old.

Oh yeah, there is one other game from that 2007 that the outcome will not be changed:

Round the bowl and down the hole, Roll Tide Roll! 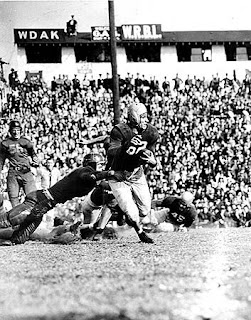 Yards on the ground by Charley Trippi vs. Georgia Tech in UGA's 1942 national championship season. Trippi was later selected as the first overall draft pick of the NFL.
Posted by Streit at 5:00 AM No comments:

For the upcoming release of NCAA Football 10, EA Sports has created a new feature to the game which allows you create a team. In previous versions of the game, this feature was on the game itself and was rather limited. This year, they have totally changed it up and moved it to the Internet. You can create your team on the web, down to some very small details including players names and attributes. The team will then be available for download through the XBOX Live (or whatever Play Station's Online system is called).

I was thinking about creating an All-Time Georgia team. Previous versions of the game had an All-Georgia team, but I seriously disagreed with some of the player choices (Quincy Carter was the backup QB for crying out loud) and it had not been updated since about 2002. I will post my team once I finish creating it.

If you want to try it out for yourself, check it out at http://www.easportsworld.com/en_US/ncaafootball/create_a_school
Posted by Streit at 1:38 PM 1 comment:

87
Field goals made by Billy Bennett during his career, an SEC and NCAA record. 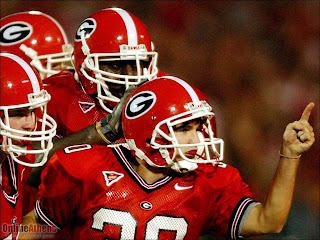 "The only place I'm coming is all over ya'lls faces." - Drunk Billy Bennett to a bunch of girls in a cab who asked him to come hang out with them. 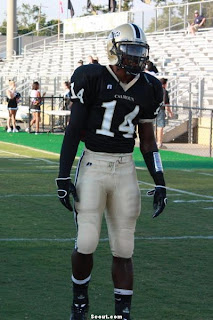 Georgia picked up a verbal commitment from Da'Rick Rogers, a 6-3 receiver from Calhoun High School today. Rogers is currently ranked as the #4 wide receiving prospect in the class of 2010 and had 66 catches for 1300 yards and 11 touchdowns in 2008. Rogers had narrowed his choices down to Georgia and Florida, and I sure am glad he has decided to stay in state. Scout.com had this to say about Rogers:
Overall, Rogers is an impressive physical specimen and at times looks like a Calvin Johnson-type player. He is aggressive, makes plays and presents some difficult one-on-one mismatches for opposing defenses. Excellent prospect. - Read the rest of the evaluation here
I saw Rogers play in the AA State Championship game last fall. Buford was clearly a better team than Calhoun, but Rogers made some amazing plays that kept his team in the game. Welcome to the Dawg nation, Da'Rick. I look forward to see you catching passes in Sanford Stadium beginning in the fall of 2010.
****UPDATED: Now with Video!
AMP: DaRick Rogers picks Georgia @ Rivals Video
Posted by Streit at 4:42 PM No comments: 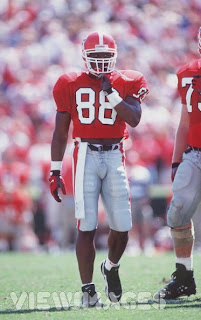 89
Length in yards of the Georgia record for longest touchdown run. 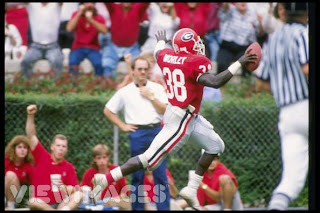 This was achieved by Johnny Griffith against Furman in 1946 and by Tim Worley against Florida in 1985. 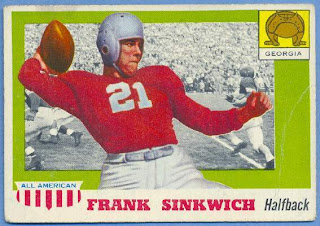 Number of yards covered on a touchdown pass from Frank Sinkwich to Lamar Davis vs. Cincinnatti in 1942. Georgia won the game in Cincinnatti 35-13 en route to a national championship.
Posted by Streit at 5:00 AM No comments: