Bulldawg Josh and Bubba's 80's Music Video of the Week

Okay, it's been long enough and it's time to have the B'NE John Hughes moment of 2009. Direct from fictional Shermer, Illinois, here is Simple Minds with "Don't You (Forget About Me)" from the 1985 movie The Breakfast Club.

Simple Minds Don't You Forget About Me

Yes, this song is cliché 1980's but come on, it's awesome. It has been stuck in my head all week and it's starting to annoy the guy in the cube next to me. The sooner we get this song on the blog, the sooner we don't have to worry about seeing it again. Plus, it will probably be stuck in you head for three days now as well. On a side note, it is impossible to find this song as a cell phone ring tone.

Earlier this week, Pitt basketball rose to #1 for the second time this season, holding the spot for 2 weeks previously. In its first game back at #1 last night, Pitt was dominated by Providence 81-73, never leading and at one time down by as many as 20 points. Providence is 17-11, 9-7 in a very tough Big East conference, but by no means should dominate the #1 team in the country.

Under Jamie Dixon, Pitt basketball has continued the success started by Ben Howland before his departure to UCLA. In fact, Dixon's overall record stands at an impressive 157-43 over his first 6 years as a head coach. He is just 5 wins away from overtaking N.C. State's Everett Case (1946-1952) for the most wins by any head coach in NCAA history in the first 6 years of his head coaching career.
Pitt is 25-3 this year and primed for a possible #1 seed in the NCAA tournament, something it has never accomplished. Under Dixon, the Panthers have consistently competed for #2-#4 seeds in the tournament. Yet, Pitt has never advanced past the Sweet 16 in those years.

Yet, they quickly lost as the nation's #1 team and haven't advanced past the Sweet 16. Sound all too familiar?

From all appearances, Jamie Dixon runs a clean program like Mark Richt. They are both excellent head coaches. They both have conference championships in the nation's toughest conferences for their respective sports. And yet both programs have proven time and again that they are not-ready-for-primetime players, losing quickly when ranked as the nation's #1 team and in dominated fashion. That or losing games when it seems like the programs are only a couple of rungs away from the top of the ladder.

So what gives? Only Dixon and Richt can answer that question. And that question needs to be answered by those two coaches because in today's 24-7 sports world, if a coach can't answer that question and falls short of a national championship because of it, he can kiss any mention of his name with the top coaches goodbye, no matter how many games he wins. Dixon, being interviewed by ESPN about his impressive 6-year record, was asked why Pitt wasn't in the same discussion as the UConns of the world. He had a simple answer: Pitt hasn't won a national championship. Dixon simply said, "We have to win a national title."

Jim Calhoun and UConn is a great example. Calhoun built the UConn basketball program over many years. But until UConn upset Duke in the 1999 national championship game, UConn just wasn't mentioned with the Dukes of the world. It didn't matter how many games Calhoun had won up until that point.

I like Jamie Dixon and I like the hard-nosed basketball that Pitt plays. So, here's to the Panthers, the UGA of college basketball, winning on the big stage...or getting out of the Sweet 16...at least...

Disclaimer: I realize that some UGA fans will never cheer for Pitt at anything due to Tony Dorsett and Dan Marino. And, yes, I threw up in my mouth a little thinking about pulling for Mark May's alma mater. 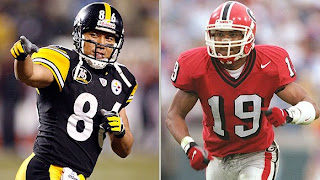 Something to Pass the Time This Off Season

Football season is over, March Madness is yet to start, and baseball season is still a month away. How is the sports fanatics like me going to pass the time? The answer is ESPN's new game, Streak for the Cash.

We have often spoken about the things we dislike about ESPN, but this new game is not one of them. I was turned on to it by a couple of co-workers and it has become a common topic of discussion in the office. Here is how the game works:

- You create an entry with the goal of creating a winning streak of correctly picking between two possible outcomes of a sporting event.
- Each day, there is a list of events listed on the web site. You can only pick one at a time, so there are advantages to picking the random soccer game in Europe at 10:00 AM Eastern time so that you can pick a winner of the night's NBA game.
- The scenarios are presented in a number of different sports with a number of different types of outcomes. Some are straight up winners (pick the winner of Atlanta vs. New York in the NBA), players stats (who will score more points: LeBron James on Kobe Bryant), as well as over/under type numbers (will there be more than 3 goals scored in a hockey game).
- To win the contest, you must create a streak of 27 consecutive correct picks. The winner gets $1 million. This is second time ESPN has done this (the first time, you had to get to 25 to win). They also award monthly prizes of $2,500 for the person with most correct guesses overall.

ESPN Streak for the Cash

***UPDATE: I have created a BNE group. Search for "Bubba 'N Earl". The password is: godawgs
Posted by Streit at 10:05 AM No comments:

When Knowshon Moreno announced his intentions to go to the NFL it opened the door for a new starter to take over the tailback position for the Dawgs. One of the favorites to take on the role is redshirt sophomore Caleb King. Here is a look at the running back from Norcross, Georgia who wears #4 for the Dawgs:

King began his school career at Parkview High School in Lilburn. By the time he was a sophomore, he had taken over as the go to player in coach Cecil Flowe's offense. As a sophomore he rushed for over 900 yards and 397 yards receiving and 3 return touchdowns. However, it was during his junior year that he became the focus of many national recruiters. As a junior, King rushed for 2,768 yards and 19 touchdowns.


For his senior season, king transferred to Greater Atlanta Christian. He was off to a fantastic start (939 yards and 13 touchdowns) and was considered a five star recruit before breaking his leg. The injury would end his high school career, but King soon announced his intentions to go to Georgia as part of the class of 2007.


Caleb King arrived at Georgia in the fall of 2007 and found himself at the back of crowded Georgia backfield that included seniors Thomas Brown and Kregg Lumpkin as well as freshman phenom Knowshon Moreno. King redshirted that fall and finally made his Georgia on field debut at G-Day 2008, making some exciting plays in front of a rain-soaked crowd.


In the fall of 2008, King was second on the depth chart behind Knowshon Moreno. King had his best game of the season in the opener against Georgia Southern, racking up 95 yards on 12 carries.


After scoring his first career touchdown against Central Michigan, King's playing time began to decrease. He had a couple of key runs in the victories over Tennessee and LSU, but after missing struggling with his blocking (particularly against Florida) King was demoted behind freshman Richard Samuel. He did have a nice catch and run in the Bowl game and finished the season with 247 yards rushing on 61 carries (4.0 YPC) and 1 touchdown.

For King to become the featured back in the Bulldog offense, there are a number of areas which he must improve. The first and biggest weakness King has is his blocking. He needs to add some strength to hold provide time for Joe Cox. Secondly, King must lower his head and attempt to break tackles. He has good quickness and the ability to make defenders miss, however he will need to be able to break tackles to prevent broken runs from turning into losses.

Look for a competitive competition between King, Richard Samuel, Dontavious Jackson, and Carlton Thomas this fall. King appears to have the upper hand with his experience and the fact that Samuel is out for spring practice and G-Day.