Earlier this week, Pitt basketball rose to #1 for the second time this season, holding the spot for 2 weeks previously. In its first game back at #1 last night, Pitt was dominated by Providence 81-73, never leading and at one time down by as many as 20 points. Providence is 17-11, 9-7 in a very tough Big East conference, but by no means should dominate the #1 team in the country.

Under Jamie Dixon, Pitt basketball has continued the success started by Ben Howland before his departure to UCLA. In fact, Dixon's overall record stands at an impressive 157-43 over his first 6 years as a head coach. He is just 5 wins away from overtaking N.C. State's Everett Case (1946-1952) for the most wins by any head coach in NCAA history in the first 6 years of his head coaching career.
Pitt is 25-3 this year and primed for a possible #1 seed in the NCAA tournament, something it has never accomplished. Under Dixon, the Panthers have consistently competed for #2-#4 seeds in the tournament. Yet, Pitt has never advanced past the Sweet 16 in those years.

Yet, they quickly lost as the nation's #1 team and haven't advanced past the Sweet 16. Sound all too familiar?

From all appearances, Jamie Dixon runs a clean program like Mark Richt. They are both excellent head coaches. They both have conference championships in the nation's toughest conferences for their respective sports. And yet both programs have proven time and again that they are not-ready-for-primetime players, losing quickly when ranked as the nation's #1 team and in dominated fashion. That or losing games when it seems like the programs are only a couple of rungs away from the top of the ladder.

So what gives? Only Dixon and Richt can answer that question. And that question needs to be answered by those two coaches because in today's 24-7 sports world, if a coach can't answer that question and falls short of a national championship because of it, he can kiss any mention of his name with the top coaches goodbye, no matter how many games he wins. 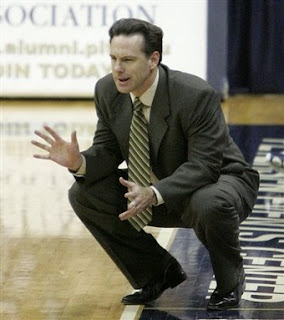 Dixon, being interviewed by ESPN about his impressive 6-year record, was asked why Pitt wasn't in the same discussion as the UConns of the world. He had a simple answer: Pitt hasn't won a national championship. Dixon simply said, "We have to win a national title."

Jim Calhoun and UConn is a great example. Calhoun built the UConn basketball program over many years. But until UConn upset Duke in the 1999 national championship game, UConn just wasn't mentioned with the Dukes of the world. It didn't matter how many games Calhoun had won up until that point.

I like Jamie Dixon and I like the hard-nosed basketball that Pitt plays. So, here's to the Panthers, the UGA of college basketball, winning on the big stage...or getting out of the Sweet 16...at least...

Disclaimer: I realize that some UGA fans will never cheer for Pitt at anything due to Tony Dorsett and Dan Marino. And, yes, I threw up in my mouth a little thinking about pulling for Mark May's alma mater.

This is a very well written post and one of the best comparison articles I've seen.

I agree completely with the comparison of Richt (a great coach) who is rarely mentioned in the same breath as the Meyers, Miles, and Carols of coaching unless he happens to be playing them that week. Its a shame that a coach like Richt, who leads his teams to consistently excellent seasons, is left out of the lofty ranks of great coaches. The same can be said for Tuberville, who despite having two "losing" seaons (his first and last), went undefeated one year, won championships, yet didn't get to compete for the national championship and as a result, wound up being ousted.

Great coaches like Richt, Tubbs, heck even Houston Nutt and Mike Leach, coaches who play great football and develop men of character, should be measured for their worth, not their crystal footballs. Character counts more in my books, and its evident the coaches so often mentioned by ESPN (Meyes, Saban, Miles, Carol, etc) are classless.

I hope Richt can finally get that crystal ball so he can at least bring the deserved respect to UGA and a program with some class.

I'd take Jamie Dixon at UGA in a heartbeat - even if I knew in advance we'd never win an ncaa national title.

Great men that are great coaches, run clean programs, develop men of character, and graduate players are no longer a dime a dozen.

May sound trite, but the above description is worth more to me than a trophy.

As much as other SEC fans like to rip him, I agree with AUMaverick on Tubbs. Some would say that he only won 1 SEC Championship, but it's what he did with that SEC Championship that counts, going 13-0. That's what ranks him on the highest rung in my book, regardless of the constant turnover of his assistant coaches. Richt's 2002 and 2007 seasons, possible national championship years, are what rank him in that same top rung. However, that's just not the case in the public's eyes unfortunately because of one key word..."possible." And that goes for Tubb's 2004 season too, even though Auburn did all it could do that year.

I should add that by no means do I include Les Miles in the top rung just because of his 2007 season. If there was ever a coach to win a national championship with 2 losses, it's appropriate that it was Miles.

Wait...are you saying how other SEC fans like to rip me, or Tubbs?

Either way, Les Miles has been riding the coat tails of Saban and its shown. With Urban "Cryer" Meyers and Saban in the SEC, it just goes to show how weak (but by no means any less dangerous) LSU has become.

College football is begining to come close to the ranks of MLB in terms of its image, tarnished! The BCS is partly to blame, but so are to boosters who have come to expect a national championship every year. With more spent on recruiting than academics, players leaving school without degrees, and coaches being fired for winning, college football is fast becoming a tarnished sport. It was once admired for its ability to mold boys into men, but now all it seems to do is turn out money grabbing show-offs.

Where is the class?