In a Bad Season, Kickers Always Seem to Shine

Last night, Georgia punter Drew Butler won the Ray Guy Award given annually to the nation's best punter. His teammate, Blair Walsh, was also a finalist for the Lou Groza Award, given to the nation's best placekicker. Drew Butler certainly deserved this award, leading the nation with a 48.8 yards per punt average. Walsh made 19 of 21 field goals, including 10 of 11 from 40+ yards. While both had amazing seasons, this is the first time in recent memory that Georgia kickers have been recognized for their work. My question is, why does it seem to take a bad season to recognize the importance of these players to their team?

Georgia has a great tradition of kickers under coach Mark Richt. Our punters have traditionally ranked near the top of the SEC in yards per kick. Jonathan Kilgo, Gordon Ely-Kelso, and Brian Mimbs all enjoyed stellar careers for the Dawgs during times when the Dawgs were consistently ranked in the top ten in the country. The same goes for the kickers. Brandon Coutu consistently made long field goals look easy and was drafted by the Seattle Seahawks. Before Coutu, Billy Bennett was setting SEC records on his way to becoming the second leading scorer in NCAA history.

But up until Butler's win last night, a Georgia kicker had never been recognized nationally with an award. The winner of the Groza last night, Kai Forbath of UCLA, also played for a team that struggled this year. It seems the media is quick to recognize offensive players for their individual efforts, but when it comes to kickers, they need their team to be bad to give them an extra push.

Congratulations Drew Butler on a fantastic season! You certainly have done the Butler family name proud.
Posted by Streit at 8:56 AM No comments:

Rumors Confirmed: Jabba The Hutt is the New DC at UGA 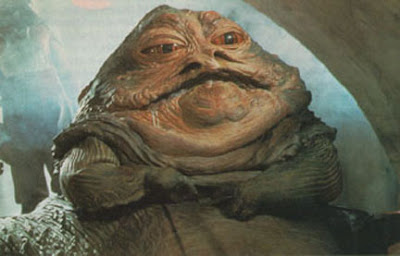 Don't judge. Giant space slugs can be good coaches, too.
Jabba The Hutt is most well known for being the intergalactic crime lord based on the desert planet of Tatooine. Known for his cunning nature, ruthlessness, and love of all things evil, he is seen by many as a powerful force in the space crime world (as well as taking great pleasure in out smarting his opponents and torturing them).
"I'm very excited about this opportunity." Jabba told members of the media on a conference call this morning (NOTE: the translation is loose as it is quite difficult to find someone that speaks Huttese). "I've wanted to venture into coaching for a long time, and I think my experience as a crime lord will enable me to bring unique leadership to the football field."
Mark Richt was unavailable for comment during the announcement due to recruiting obligations.
Jabba's selection as a defensive coordinator for a college football team may seem like an odd move to many. However, Jabba's background and personal characteristics might suit him well for the job.
Jabba the Hutt was actually a skilled defensive lineman at Oregon State University, starting during the 1962, '63, and '64 seasons. Jabba led the defense in helping the '62 beavers reach the Liberty Bowl, and the '64 team to the Rose Bowl. As a freshman, he play on both sides of the ball and being a key asset on the line that protected 1962 Heisman Trophy winning quarterback Terry Baker.
While Jabba attempted a career in the NFL after being drafted by the Green Bay Packers in 1965, a severe ACL tear in training camp left him immobile for months. This lead to Jabba's massive weight gain, thus preventing him from ever getting back into shape, and eventually he began a career in organized space crime.
All the while, Jabba stayed involved with his alma mater as one of its major boosters. According to insiders, Jabba has always held a great passion for college football and one day wished to become involved more personally.
When asked why he wanted to coach at Georgia, Jabba himself said, "I first met Mark Richt many years ago when he was recruiting one of my many illegitimate space children to come play fullback at Florida State. When my son was eventually killed by a rival bounty hunter before he could enroll in college, Mark Richt reached out immediately to my family. He has remained a friend ever since. I've talked with him many times about venturing into coaching, and as soon as the opportunity opened, I called him with my interest. Luckily, he allowed me to present myself to him and his staff, and evidently they saw something in me that clicked.
"I think I will be able to bring a lot to Georgia. Ask anyone that's been in business with me, they know my ability to get people to believe in me. Typically, their life has depended on it."
When asked how will he be able to keep his players out of trouble when he has built a career off of crime, Jabba responded, "No one knows more about trouble than me, so no one knows how to keep kids out of trouble more than I do. Whether it's kidnapping or placing bounty on people's heads, I've done it. This will be a new kind of scared straight...scared Jabba straight."
One reporter asked who Jabba might bring in as his new position coaches. "I'm considering many options, including bringing some unconventional choices, like some bounty hunters I've employed. However, I won't be employing any storm troopers. Too close to the traditional powers, " Jabba said.
When asked by another report if he wouldn't be a better fit Georgia Tech, given his sci-fi background, Jabba replied, "Gimme a break. Georgia is the type of place for me. I may have connections with Star Wars, but I am by no means a nerd. In fact, I hate nerds, that's why I eat them, and turn their women into slaves."
What about Jabba's death in Return of the Jedi? Is this even possible to be happening? Jabba's reply: "It's not really applicable, as that was an alternate galaxy, and I've often traveled back and forth between these different galaxies. I have a theory that most of my activity as a crime lord has taken place in a different dimension. While unproven, it could explain my existence here while I may suffer a death on Tatooine.
"End of the day, it doesn't matter. I'm ready to come to Georgia, and I'm ready to win. Even if it means kidnapping Urban Meyer's daughter and turning her into my personal slave."
Posted by BulldawgJosh at 7:00 AM 6 comments:

The End of College Football Season and Bowl Season

While we still have weeks of bowl games to go, the college football regular season has come to an end. And while this season did not turn out the way many of us hoped for Georgia, it was another fun year of football across the country. Posting will be light for the next week or so as I am attempting to wrap up a big project at work. I'll be back next week to begin looking at Georgia's Independence Bowl opponents, the Texas A & M Aggies. We'll also announce the final winner of the Bubba 'N Earl Pick'em and announce our Bowl Challenge.

Following bowl season, we will begin take a look back at college football in the 2000's. 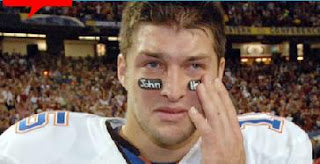 I know you are an emotional guy and you are upset at losing, but let me let you in on a little secret.
YOU DID NOT LOSE THE GAME TONIGHT. The Florida Gators lost the game.
Over the last four years, you have shown your emotions and the media has just eaten it up. And when you made your famous speech last year, you seemed to take responsibility for a loss in a game that your team lost 31-30. When you lose a game where the other team scores 31 points, its not your fault.
And tonight, Florida was out manned by a better all-around football team. You played your best and that's all you could. You've won a Heisman trophy and a pair of national championships. No matter how much you cry, I will never feel sorry for you and no one else should either.
Sincerely,
College Football Fans Across the Country
Posted by Streit at 12:37 AM 3 comments: