Happy Birthday America!!! To everyone in the Bulldawg Nation and across the country, have a safe and fun Fourth of July.

God bless the USA and the Georgia Bulldogs!
Posted by Streit at 9:41 AM No comments: 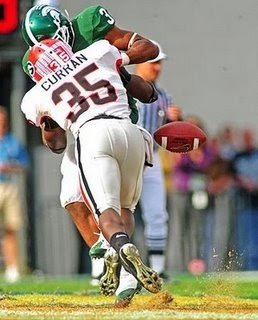 Number of solo tackles by Rennie Curran in 2008. The Bulldog junior lineback had 115 total tackles last season.
Posted by Streit at 9:34 AM No comments: 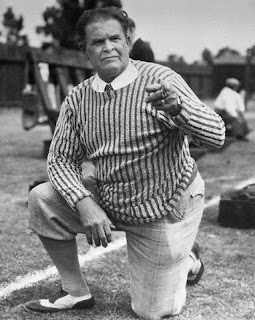 Winning perecentage for Coach Glen "Pop" Warner during his two years on the Georgia sideline. The legendary coach is know for a number of innovations that changed the game, include the spiral pass and the single and double wing formations.
Posted by Streit at 7:00 AM No comments:

The Pig that Brought a Championship

With the Independence Day holiday this weekend, I thought it fitting to share the story of how a a stolen pig that was cooked at a players' party in 1980 could have cost the Dawgs dearly but ended up uniting the team for its National Championship run. I had never heard this story until I ran across it in a book the other day, so while some of our readers may know this one, I hope you enjoy hearing it again.

The Story of the Purloined Pig

Back during the Vince Dooley years, players on the Georgia football team celebrated the end of spring practice by throwing a team only party known as Seagraves. The team came together and basically celebrated by drinking as much beer as they could (according to Scott Woerner, the team had 127 cases and 8 kegs at the 1980 party.) In 1980, five senior players decided they wanted to not only have beer but serve food at the party as well. Because they were short on money, they decided the best way to get food for the party would be to steal a sow from the University Research Center. 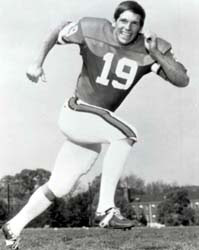 The senior players (All-American Scott Woerner, Defensive Captain Frank Ros, rover Chris Welton, and linemen Nat Hudson and High Nall, set out to steal the pig. Using a bow and arrow, Nall managed to shoot a nearly 400 pound sow and it took the entire effort of all five of them to get the pig out of the pen. They slow roasted the pig and served it at the party , much to the delight of the rest of the team. Their plan had worked perfect and they almost got away with the whole thing.

In true "Lord of the Flies" fashion, they mounted the head of the dead pig on a stick. When the party was over, a couple of freshman decided it was a good idea to bring the head to campus, where it ended up at the feet of some un-expecting students near the dorm. The freshman players were going to get nailed for the whole event, but Ros and Woerner decided to turn themselves in. Dooley and Russell were pissed, as you can imagine, and the players nearly were kicked off the team. 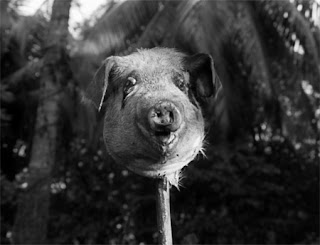 Instead of kicking them off, they were forced to work for Dooley that summer while not being on scholarship. The players performed a number of tasks, including painting the brick fence near the practice field...twice. All this during what was recorded as the hottest summer Athens has ever experienced. By the time the season rolled around and the story had reached the papers, they were using it as a rallying point for the season. As Erk Russell said, "Hugh and Frank, all of them, were in positions of leadership on that team, and darn if I don't think it was a bond for everything. Now that may seem far-fetched to you, but it doesn't to me. Right off the bat, they had something in common. It drew people together and the team, too."

Who would have known that a college prank of stealing a pig from the University would be a catalyst for a national championship season. Can you imagine what would happen if something like this happened today?

* You can read the full story, along with many others about the 1980 team in Vince Dooley's book, Tales from the 1980 Bulldogs.
Posted by Streit at 4:01 PM 2 comments: 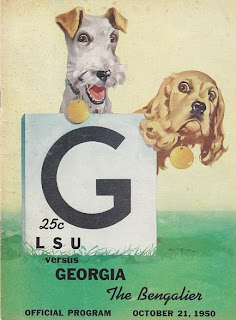 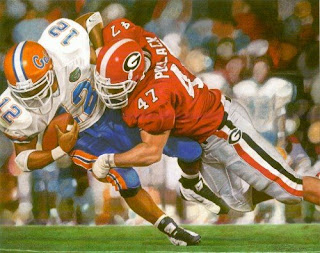 Number of Bulldogs selected as All-Americans, including three-time All American David Pollack.

Posted by Streit at 7:00 AM No comments: 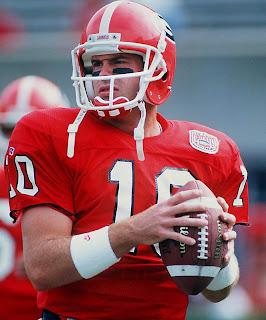 Number of school records held by quarterback Eric Zier when he completed his Bulldog career. He left with a then SEC record 11,153 yards passing (which was later passed by Peyton Manning and fellow Bulldog David Greene) and 67 touchdowns.
Posted by Streit at 7:00 AM No comments:

68
Yards on the touchdown run for Knowshon Moreno against LSU last season. The Dawgs won, 52-38.
Posted by Streit at 5:00 AM No comments:

69
Interception yards returned by Tra Battle on three interceptions against Auburn in 2006. This includes a 30 yard return for a touchdown in the Dawgs upset victory of the then #5 ranked Tigers.
Posted by Streit at 5:30 AM 2 comments: