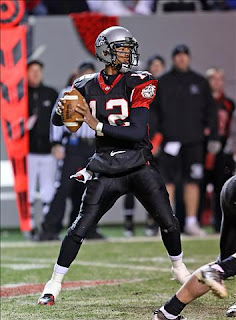 Friday night Georgia received a verbal commitment from Mint Hill, NC quarterback Christian LeMay as a member of the 2011 class. LeMay, who is about to complete his junior season at Butler High School, is rated as the #2 quarterback in the country for the class of 2011. During his junior season in 2009, LeMay passed for over 3,200 yards and 44 touchdowns while leading his school to the state championship. What is even more impressive is that he completed nearly 69% of his passes while only throwing 2 (yes, I said 2) interceptions. He is said to possess a rocket arm with a lightning quick release in addition to having the reputation as a great leader. He already stated his intentions to help bring other big name prospects to Athens. The 2011 recruiting class is off to a great start.

Welcome Dawg nation, Christian. Look forward to seeing you on the sidelines in Athens soon!
Posted by Streit at 11:09 PM 2 comments:

Spring practice has passed and with the end of the semester returns a Bubba N' Earl tradition: the 100 day countdown to the start of Georgia football. As of today, we are roughly 125 days from the beginning of the new season. Last year, we presented Georgia football by the numbers. This year, we will be counting down our list of the 100 greatest players in Georgia football history. This is where I need you help.

We all know Herschel and Pollack will be there, but what about the lesser known players who have made Georgia football special? Send me your suggestions for players to include in the list, as well as what number you think they fit into. The countdown starts the last week of May.

If Gray Transfers, could Bacarri Rambo move back to QB?

Rumors are flying today that Logan Gray may leave the program and transfer for an opportunity to start during his final two years of eligibility. If that happens, Georgia will be down to one scholarship quarterback until freshman Hutson Mason arrives on campus later this summer. Fortunately for the Dawgs, they have a player on campus who played quarterback in high school and acted as the main scout team quarterback during his freshman year in 2008. Of course I am talking about starting safety Bacarri Rambo.

Rambo came to Georgia from Seminole County High where he was a star on both sides of the ball. While Rambo has developed into a great play making safety, if the situation was right, would Georgia move him back to quarterback? He spent his true freshman year emulating mobile QB opponents on the scout team including Tim Tebow and Josh Nesbitt. In 1995, Georgia was faced with a similar situation and moved Hines Ward to quarterback for much of the season.

Of course, none of this will probably happen. Even if Gray leaves, Mason should come in and be fine in the back up position. But with the way things have been going lately, you never know what will happen next.
Posted by Streit at 3:51 PM 3 comments: