AJ Green to catch passes from ....

Just a few minutes ago, Mel Kiper Jr. came on Sportscenter to talk about the upcoming NFL Draft. His first topic was concerning AJ Green's stock rising. AJ Green was already considered to be a top 10 or potential top 5 pick, so how much higher can his stock go? There is a real chance that AJ Green may be the second overall pick in this year's NFL draft.

And who owns the second overall pick in this year's draft? The Denver Broncos. Denver, who spent its first pick in the 2010 draft on Demaryius Thomas (before later taking Tebow), were not considering taking a wide receiver until the developments in recent weeks. Denver's third leading receiver in 2010, Eddie Royal, is coming off hip surgery and will most likely miss all of spring camp (if there is no lockout). Thomas, who missed a lot of his rookie season due to injury, tore his Achilles' tendon on Wednesday and will be out for 6 to 8 months. That means the Broncos will enter spring camp (once again, if there is a spring camp) with only Brandon Lloyd and Jabar Gaffney as the only receivers who caught at least 10 passes last year (Knowshon Moreno and Correll Buckhalter had 37 and 28 receptions, respectively, from the running back position in 2010.)


If Denver is going to hand over the ship to Tim Tebow this fall, they are going to need a big receiver who can go get passes. AJ Green would certainly fit that role and he has already proven his ability to leap and catch passes in the thin air in Colorado: 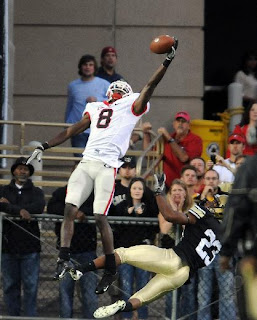 While it would be fun to see AJ and Knowshon in the same huddle again, I don't know how I feel about AJ catching passes from Tebow. It just seems wrong. In three years, Georgia will have the top quarterback, running back, and wide receiver taken in their respective years. Just makes you sad to realize what that 2008 team could have been.
Posted by Streit at 12:59 PM 3 comments:

2011 Recruiting Wrap Up: Assessing the Depth Chart - DL and Linebacker

The combination recruits and the return of players from redshirt should mean that the defensive line and linebackers will look a lot different than they did last fall. For the purposes of the depth charts below, I am listing Ray Drew as an outside linebacker and Sterling Bailey at defensive end.

Analysis
With John Jenkins manning the nose guard position, Deangelo Tyson will be able to move back to his natural position of defensive end. When we go to a four down linemen set, he will shift back into a D tackle role. Tyson and Jones should be solid at DE, both having played significantly since their freshman seasons. Derrick Lott showed some flashes last season and Garrison Smith should see the field alot this fall. I think Sterling Bailey may be able to crack the rotation, particularly in pass situations opposite a linebacker playing up on the line.

Analysis
Jenkins will fit perfectly into Grantham's 3-4. Hoepfully Geathers has continued to develop in the off-season. Freshman Chris Mayes is also expected to play the nose guard position, but i have heard rumors that he may not qualify and be headed to GMC.

Analysis
I expect that Jarvis Jones may also see significant playing time at outside linebacker. I expect Ray Drew to take a starting spot in camp this summer and Cornelius Washington to be the beast we thought he could be. TJ Stripling is coming off that horrendous knee injury, but if healthy, could be in for a breakout season.

Analysis
The departure of Marcus Dowtin has opened up a spot in the starting lineup for Jarvis Jones (he may have taken it anyway). After sitting out a year healing from a neck injury, the former five star recruit could really make an impact in the SEC this fall. Christian Robinson was solid last year and will only get better. I am also excited to finally see Richard Samuel where he belongs. Most Georgia fans have never seen him on defense, but let me say that you are in for a treat. Amarlo Herrera and Kent Turene could also see the field this fall.
Posted by Streit at 3:35 PM 3 comments:

Georgia pulled in 6 new recruits who will be used on the offensive line in the next couple of years. But unlike many other positions, I do not expect any of these players to make much of an impact this season. My hope is that at least four of the six can be redshirted this fall.

Analysis
Sturdivant is set at the left tackle position while it looks like Gates will move over into the right tackle position. If any of the true freshman make an impact, I would give the edge to Watts Dantzler and his 6'7'', 315 lbs body.

Analysis
The left guard position is mist likely the only open competition on the offensive line headed into spring camp. Justin Anderson has been moved around so much that I can't put him as the favorite to start. I doubt any of the freshmen make an impact at guard this fall.

Analysis
This has been Ben Jones' job for the last three seasons and that will not change this fall. Look for Burnette to see time as Jones' back up. Ty Frix will hold down the long snapper position again this fall and freshman Nathan Theus will most likely take over in 2012.
Posted by Streit at 12:15 PM 5 comments:

2011 Recruiting Wrap Up: Assessing the Depth Chart - WR and TE

The dawgs picked up 5 players who are expected to have big impact in the passing game. Here are a look at the wide receiver and tight end depth charts.

Analysis
With the departure of AJ Green and Kris Durham, the only spot that appears to be guaranteed is Taverres King's. Marlon Borwn came in as a five star recruit, but has failed to live up to the hype at this point. I think he will be given every chance to start and will most likely hold that job come opening day. After that, it is a wide open race. Wooten showed flashes in 2009 but almost completely disappeared last fall. Minus one touchdown catch against Auburn, Israel Troupe's career has been almost non-existent. And I have heard much about Michael Bennett. As for the incoming freshman, I expect at least two of the four to see playing time this fall. Malcolm Mitchell appears to have the talent to make an impact soon. Chris Conley enrolled early and will have a leg up on the other guys. Scott-Wesley may see action as well. I fully expect Seay to redshirt.

Analysis
I originally expect Jay Rome to redshirt this fall, but with the permanent move of Bruce Figgins to fullback, my outlook has changed. i expect we will see a lot of multi tight end sets, particularly with Orson Charles lined up as more of a slot receiver than a tight end. Figgins was the best blocking tight end on the roster, so if Rome shows his blocking skills off early, he may pass Lynch for playing time.
Posted by Streit at 2:18 PM 3 comments: