Here's a surprisingly great quality video (despite the song misspelling) for Oingo Boingo's "Weird Science" (You'll recognize it as the theme song for the awesome John Hughes film of the same name).
Great band that inspired one of my favs of all time. Surprising how many people have never heard of them despite Danny Elfman's success as a film composer.
Posted by BulldawgJosh at 8:00 AM 1 comment:

Champ is out, but what about Charles?

I started a new job this week and have not had a chance to write much. A lot of has happenned over the last week, including Georgia finally hiring a new linebackers coach, Aaron Murray hurting his ankle, and the Tennessee athletics program going to hell. A few weeks ago, I write an article explaining why I thought Champ Bailey would be a perfect player for the Falcons to sign in free agency. That dream ended this week when Bailey signed a four year extension to stay in Denver. With Champ out of the equation, I see another former Bulldog moving to the top of the list of players the Falcons could target.


That player is defensive end Charles Johnson. Charles Johnson played for Georgia from 2004 - 2006. He was drafted in the third round of the 2007 NFL draft. After recording only 10 sacks in first three seasons in the league, Johnson had a breakout season in 2010. Taking the place of Julius Peppers as the leader of Carolina's pass rush, Johnson tallied 11.5 sacks and had 62 total tackles. The Carolina Panthers decided to place their franchise tag on a center (REALLY?!?!) meaning Johnson could become a free agent. While Johnson's price tag may be higher that Bailey's, he is only 24 and appears to be entering the prime of his career. 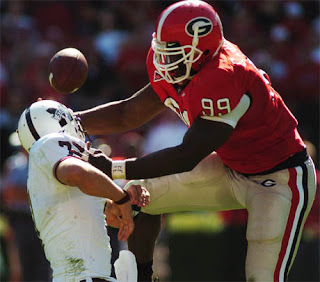 It sure would be nice to see the Hawkinsville native back in his home state rushing the quarterback opposite of John Abraham. Let's bring this Dawg home!
Posted by Streit at 7:44 PM 2 comments: