The SEC has always done its part to schedule tough out of conference games and 2010 will be another year marked by interesting match ups between schools who do not normally meet in the regular season. Here is a quick look at seven intriguing games to watch out for this fall:

LSU vs. North Carolina - Sept. 4 in Atlanta
Everyone keeps waiting for Butch Davis and the Tar Heels to have that breakout season they have been expecting. A win over LSU to start the season would be a great springboard into the 2010 season.

Penn State at Alabama - Sept.11
Penn State took advantage of sloppy play and conditions to beat LSU in the Capital One Bowl on New Year's Day. I don't think they will find their visit to defending national champion Bama quite as pleasant.

Oregon at Tennessee - Sept. 11
Pac 10 Champion Oregon comes across the country to face Derek Dooley's Vols. The Vols did not fare well against the Pac 10 in recent years, dropping two games to a weak UCLA team.

South Florida at Florida -Sept. 11
South Florida has been a consistent contender in the Big East the last few years, but after firing head coach Jim Levitt they will face a lot of questions. Do they have what it takes to put up a strong fight against the reloading Gators?

Clemson at Auburn - Sept. 14
A rematch of the 2007 Chick-Fil-A Bowl, Auburn hosts "Auburn with a Lake" in this early season game. Will Cameron Newton be ready to handle his first big test on the Plains?

The Dawgs should win this game, but it may be a challenge. Colorado almost upset the Dawgs at home in 2006 and Georgia has to travel to Mississippi State the week before.

Offense should not be a problem in this game as two high scoring teams with talented (and tall) quarterbacks square off. The question is, will there actually be any defense played at all?

Posted by Streit at 1:25 PM No comments: 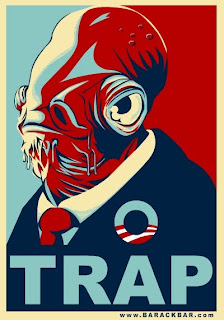 Ole Miss's new mascot? You've got to be kidding!
I'll admit it, I am huge Star Wars fan. Call me a geek, but George Lucas's space opera is one my favorite movie series of all time. Star Wars has carved its own little space in the college football world because of the film's music (created by John Williams). And while Auburn playing the imperial death march is fine and dandy, never would I figure a Star Wars character could appear on the sidelines of a major college football program. That may all change in the near future.

The AJC is reporting that the Ole Miss student body is currently pushing for Star Wars character Admiral Ackbar to be their new mascot. Ole Miss is currently searching for a replacement for Colonel Reb, whom the school retired a few years ago after some felt the mascot was not politically correct. The students are voting for the new mascot online. How does Admiral Ackbar connect to Ole Miss? Because in The Return of the Jedi, Admiral Ackbar was the commander on the Rebel Alliance. Ole Miss Rebels...Rebel Alliance...makes sense, right? Yeah, not so much.

Seriously Ole Miss, if you let this happen you will become the laughing stock of the SEC. Can't you just get an old dog (Georgia, MSU, Tennessee), cat (LSU), or other annoying animal (see Auburn's Eagle, Florida's Gators, or Cocky)? Seriously, Vanderbilt would never consider replacing the Commodore with a walking Commodore 64! 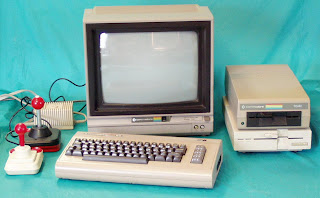 This is the SEC. In the words of Admiral Ackbar himself, switching your mascot to a Star Wars character is a trap!

Lets leave the Sci-Fi and fantasy stuff to the Nerds. 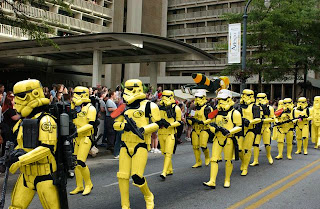 I'm not a big hockey fan, but I found myself captivated last night watching the USA defeat the mighty Canadian team at the Olympics. Yes, Team USA is made up of some good NHL players and they have an exceptional goalie, but the Canadian team roster reads like an All-Star team. Clearly, Canada was more talented, as they remained on the attack throughout much of the second and third periods. But the scrappy American team continued to fight, and this empty net goal, a pure hustle effort, signified why the Americans won the game:


These Olympics are turning out pretty amazing for the American hockey team. Maybe the Georgia Bulldogs should take some notes about playing with heart and use it on the field this fall.